Magers sets the standard, and now he’s a hall of famer 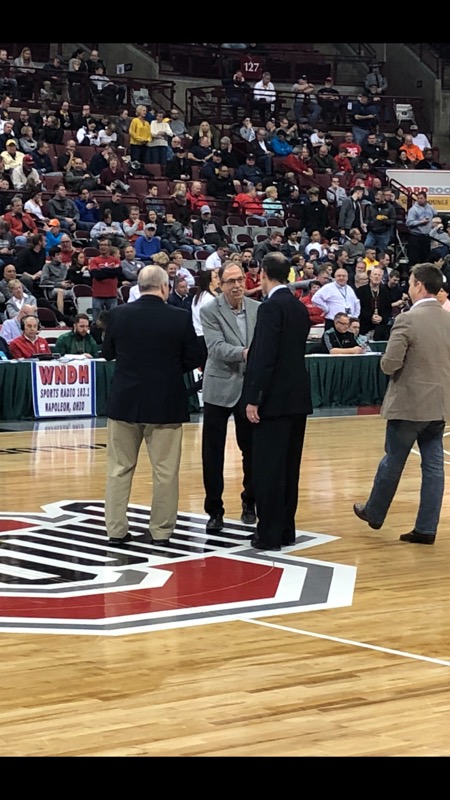 PHOTO SUBMITTED A-T contributor Pat Magers is honored during halftime of the Division I boys basketball championship game at the Schottenstein Center in Columbus.

Pat Magers has a style that so many of us try to emulate.

Magers — a St. Wendelin graduate and A-T contributor — was inducted into the Ohio Prep Sportswriters Hall of Fame Saturday at halftime of the Division I boys basketball championship game in Columbus.

In a career that has spanned five decades, Magers has written some of the best work you will find.

He has this trick where he’ll start a story with something that is often peculiar. He’ll weave the idea throughout the story without ever reaching.

Then he’ll close with a sentence that ties the whole idea together.

As a writer, I love him and hate him for that.

Love him because it’s brilliant writing.

Hate him because it’s so difficult to do. Despite my best efforts, I’m not sure I can do it quite as well as Pat.

And that was as players and coaches.

In the fall, Magers said that Johnson was the best football player he had ever covered.

“Growing up, you’re from a small town, you kind of know everybody,” Johnson said. “Obviously, I knew Pat. He was very committed, obviously, to sports. But very committed to Fostoria sports. One of the things, the articles Pat wrote about sports, I would say they’re very instrumental in really keeping the community together. When you’re from a small community, it’s like Friday Night Lights. I think Pat was very instrumental in creating that type of environment.”

Maybe that’s because he’s put the pictures in our minds of what the games were like, as vividly as if we had attended them.

It was Magers who broke the hire that changed the Columbian football program around in 1993. He reported that Steve Gilbert was going to be taking over.

In an interview Saturday, Gilbert recalled the first time he met Magers.

“We were renting a house, and (Pat and I) sat on the front porch, we were talking about taking over the Columbian position,” Gilbert said. “It made a big impression on me, that he took the time to come over.”

Tornado football rose to new heights, quickly, as Gilbert piled up winning seasons and playoff appearances until he stepped down after the 2009 season.

Magers was there for much of it. It was in some ways fitting — Gilbert is a hall of famer too, after all.

After a rough first season, the Tornadoes scored a signature victory the next season, defeating Fremont Ross — which was led by future Heisman Trophy winner Charles Woodson.

“That was the game that kickstarted everything. The kids knew that, ‘Hey, we can play with anybody,'” Gilbert said. “The whole thing was that game kickstarting everything, and Pat was there. Every game. His pregame articles, his game articles, separate articles he did about the family. He was just tremendous to my family, so, I’m truly indebted to him.”

Magers connects so many of us. Kids who read his work in The A-T today have parents and grandparents who have read him for years.

Pat was part of The A-T long before I arrived. But he has acted as something of a mentor for many of us who have come through. From Dave Feltner to Mike Genet to Matt Nye, we have all looked to him at times for advice or support. He has, without fail, provided both. He’s one of the few people around who I can talk to who knows what this job is like. He was the sports editor here, and he often listens and gives the sound advice I need.

Pat and I are similar in many ways. We both are so passionate about Cleveland sports, even if we have minor disagreements on things like the historical importance of Josh Cribbs.

And if I state a political opinion in the office — often leaning to the right of the political center — Pat will give me a look, push his glasses to his nose, and tell me why I’m wrong.

His writing is as strong today as ever, even if he refuses to fall prey to some of the current media formats.

When Johnson was dominating the gridiron at Fostoria High, social media wasn’t a thing.

Maybe there’s some irony in that.

In today’s edition, you’ll find a few stories with Magers’ byline. For years, he has covered the state boys tournament, and I’d argue he does it better than anyone.

Once, Pat referred to himself as a “meat and potatoes” writer.

Maybe. But the meat is filet mignon and the potato is the Bonnette that grows on French soil.

“He was fair, and he was just a tremendous person,” Gilbert said. “H e was really good to my family, myself and Columbian football. He was top of the line.”

And there is no better feeling, after a Browns win, than getting that text from Pat:

“I don’t see them losing another!”

“Pat was in my hall of fame for 40 years,” Johnson said. “I think that for him to be recognized as such, on a much larger scale, is well-deserved.”

He can’t be emulated.

Zach Baker is the sports editor for The Advertiser-Tribune.

How does one handle news of tragedy in world of sports?

I received the news from my sister. She had called about something else, but wanted to know if I had heard about ...

Ready to give spring football — and XFL— another try

Some people can never have enough football. And, yes, I am one of those people. So when the XFL kicks off at 2 ...

My reflections on the NFL’s latest Super Bowl Sunday extravaganza

Most people consider it a must-do activity. Super Bowl parties are commonplace, though I myself have never ...

The Villages in Florida bills itself as the America’s friendliest hometown. I have seen nothing to refute that ...