Tornado trio confident it can ‘get stuff done’ 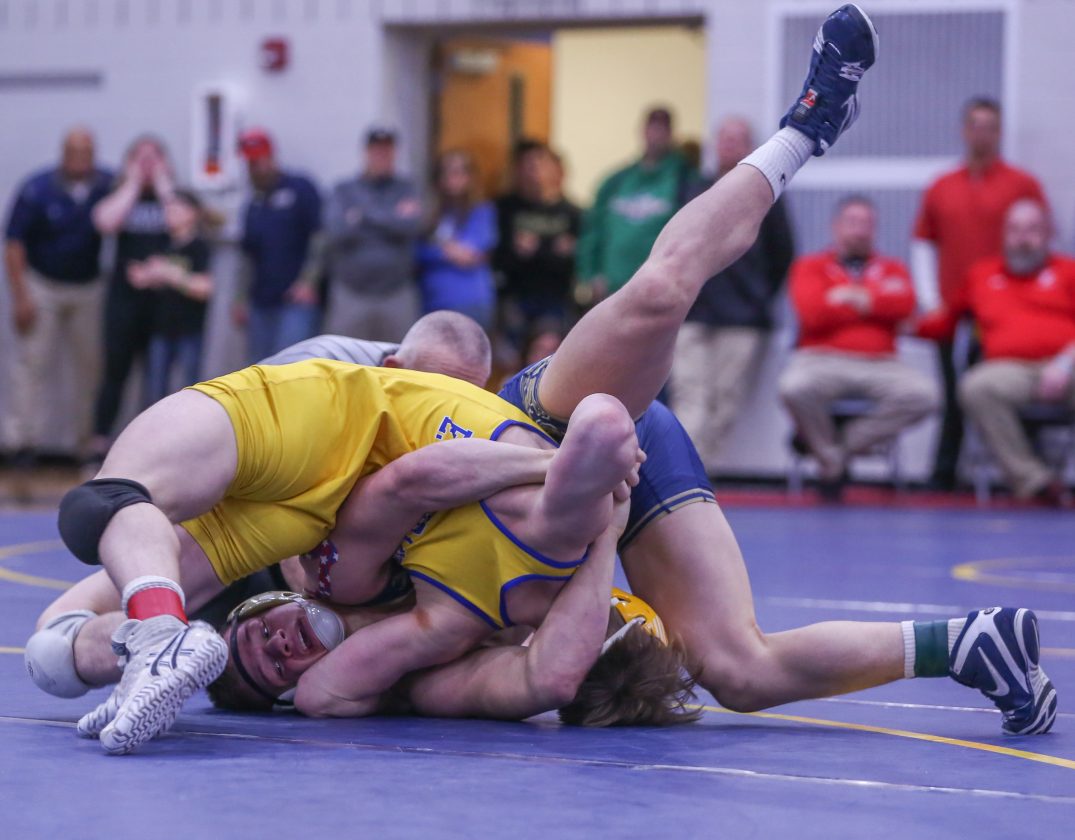 PHOTO BY STEVE WILLIAMS Columbian's Brody Conley fights to gain top position over a tough opponent in Ontario's Ethan Turnbaugh Saturday at the Division II district meet in Norwalk. Conley would go on to win the 152-pound championship.

They also have confidence, and high expectations.

Each wrestler has a story. Brody Conley is going back to Columbus after finishing fourth at 145 pounds as a freshman.

Bret Minnick, a sophomore, is going into the tournament with a bit of a chip on his shoulder after reading some projections at 126 pounds.

Then there’s Maddox Simcoe, who is the only freshman at 132 pounds at the entire tournament.

The focus for TC coach Travis Salyer is on taking care of business.

“Don’t get caught trying to wrestle perfect, just wrestle like you’re supposed to,” Salyer said. “Wrestle your style. Enjoy it.”

It will be a different tournament. With the spread of coronavirus and concerns about that gripping sports at all levels, the meet will be held with minimal spectators at the Schottenstein Center. Each wrestler will be given four vouchers for family or friends, each coach will get two vouchers.

Last year, Columbian qualified four wrestlers for state, and had more than 50 fans in the crowd.

This year, Salyer said, the number will be 16.

“It’s annoying, and it’s not as hyped as it usually will be,” Conley said. “So, it’s a little (disappointing), but it’s not gonna stop me from doing anything.”

That’s the attitude Salyer is pushing to his wrestlers.

“I think, it’ll be unique in its own way,” Salyer said. “Wrestlers find a way to be creative and make noise for the guys who deserve it. It’s gonna be a unique tournament they’ll talk about for years and years.”

Conley, Minnick and Simcoe are hoping the tournament is remembered for what they do on the mat.

Conley goes in as one of the favorites to win the 152-pound crown.

“I gotta have the right mindset going in,”Conley said. “I’ve got to be ready, mentally … that’s what it all comes down to is mental preparation.”

The sophomore comes in 44-11. He begins Friday against Eaton’s KeAnthony Bales.

Conley said he has looked at the brackets.

Salyer likes Conley’s chances, regardless of what the bracket says.

“I thought he had a realistic chance to win it last year as well,” Salyer said. “He’s just a tough kid. Works real hard. He’s a great worker in the room, and it shows on the mat. He’s a fierce competitor; he knows how to turn it on on match days.

“He really wants to win a state title, and that’s definitely something he can do as long as he just sticks to what he’s done all year,” Salyer said.

“Just going to get stuff done,” he said.

Salyer is confident he will.

“I think he’s the best kid in the bracket,” the coach said. “Wherever you put him at, I think he’s gonna finish on top.”

Minnick comes in 45-6. He said he’s been looking a projections for the 126 weight class.

“They have me losing in the the semis,” Minnick said, “and I think if I wrestle (well) I could win my first match, my second match, and my semis match and get in the finals.”

“He definitely has a good shot to get to the finals, especially if he wrestles to his full capability,” Salyer said. “He’s started to settle in and have a lot of self-belief, which is No. 1 in wrestling. He’s started to get the feeling, kind of letting things flow, and I think it’s shown over the last few weeks, the last month for sure.”

“I know I’m definitely a top four guy,” Minnick said. “And I think the rankings don’t really mean anything to me, so if I just go in there and wrestle, I think I could be in the finals, that’s for sure.”

Simcoe is used to big tournaments. His brother, Joey, is a former state qualifier, and his father, also Joey, is the wrestling coach at Tiffin University.

“I want to surprise as many people as possible,” the 132-pounder said. “I’m the only freshman in my weight, so people aren’t gonna expect much out of me, but I’m ready.”

Salyer said Simcoe has been proving things all season.

“So, he’s the youngest 132 pounder in the state in all three divisions, and I think that’s a huge accomplishment in itself,” the coach said. “It tells you how tough it is, as a freshman to come into some of these middle weights, and be able make it through to the next level.”

Simcoe will be facing a senior, Chaminade Julienne’s Isaiah Northam, in the first round.

“He’s got a senior first round, and he loves these environments,” Salyer said. “So he’s gonna let go and I think with a great (showing) he can place high on the podium. He’s got a lot of potential coming in as a freshman.”