Steckel, one of best athletes in H-L history, sticks to her routine 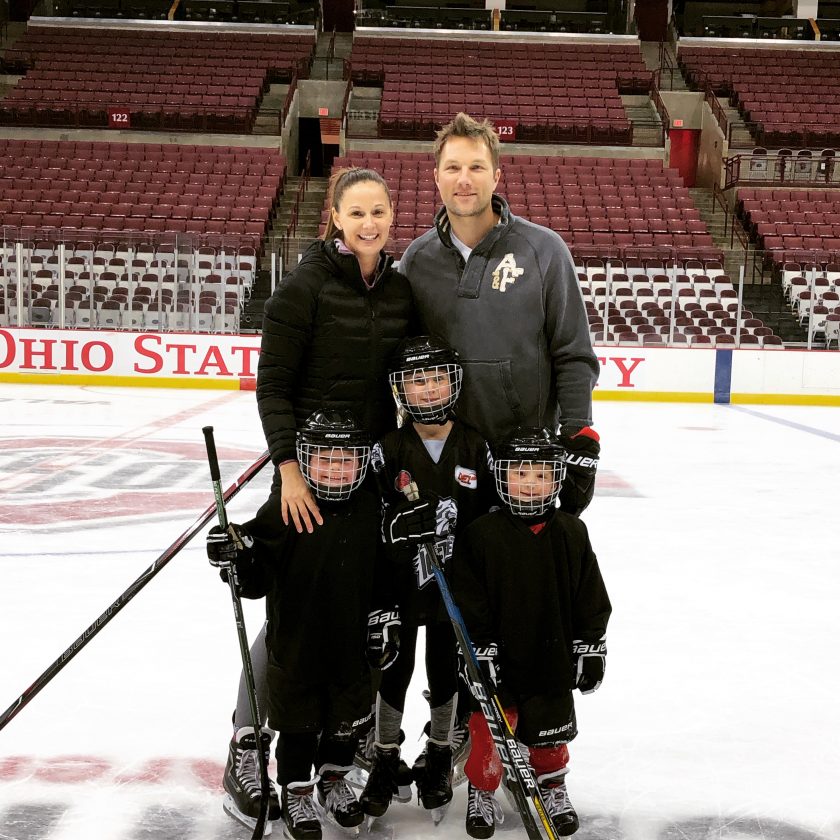 PHOTO SUBMITTED DiDi Steckel, a former Hopewell-Loudon volleyball and basketball star, is shown with her husband David and their three children in Columbus.

She is arguably the best athlete to ever play for Hopewell-Loudon.

A multiple All-Ohio player in two sports who helped the Chieftains capture a total of three state championships and a state runner-up trophy, DiDi Reynolds set the standard by which all H-L teams and athletes are now measured by the time she graduated in 1999.

But she took more than glory from her time on the courts with her. Along with great memories came the knowledge of how finding and sticking to a routine can help keep an otherwise hectic life moving along.

“It’s the only way sometimes to make sure you get everything done, keep everything sane and keep everyone still having a good time as well,” said Reynolds, whose last name has been Steckel since getting married in 2006.

And the times were good.

Hopewell-Loudon won state volleyball titles her junior and senior years. The Chieftains also got to the state semifinals her sophomore year, the first season she played on the varsity. All-Ohio honors were earned along the way.

She fared even better when the volleyball nets came down.

The Chieftains, coached by her father Doug Reynolds, won the state basketball title her senior year after ending second when she was a junior. Hopewell-Loudon was a regional semifinalist her freshman season, and only a loss to state-bound New Riegel in the district title game her sophomore year kept H-L from reaching the regional all four years of her high school career.

Steckel ended as a three-time first-team All-Ohio player basketball player and a four-time Midland Athletic League champion and four-time first-team MAL pick. In all, she tallied 2,311 points, 1,027 and 307 steals in her career.

“High school athletics, for me, too, were a ton of fun. I played with some great athletes, we had great teams. I was really lucky,” she said. “I remember the excitement, the fun. It was a great time.”

That led to a scholarship to play for Ohio State, where she helped the Buckeyes win the WNIT title her sophomore season and advance to the second round of the NCAA tournament as a senior.

And while she was good at both, Steckel said basketball was always at the top.

“I was pretty much always set on basketball. Volleyball wasn’t a huge part of my life. I played it in junior high, (but) I never really put a lot of time into it outside of the season until my sophomore year,” she said. “I loved volleyball, it was a ton of fun to play and we had great teams. That always makes it fun, too. But at that time, I was pretty much playing AAU (basketball) from the end of basketball season until volleyball season so there wasn’t a lot of time to fit other volleyball stuff in there as well.”

Still, she actually had a chance to fit a bit more volleyball into her life in college.

“I actually was asked to play my fifth year (of college) because the volleyball team needed extra players, but at that point I was kind of burned out from sports and college. But I look back and I kind of regret that, I kind of wish I would have,” she said. “Maybe if I’d have done that it would have been a cool experience. I had teammates who actually did that and really enjoyed it.”

Still a Reynolds then, she chose to pursue a master’s degree in middle school education – she is certified to teach fourth through ninth grade science and language arts — and eventually married David Steckel in 2006.

They met on campus at OSU where he played hockey for the Buckeyes.

Hockey took them to Washington, D.C., New Jersey, Toronto, Anaheim and Germany before her husband retired two years ago and took a job with a private equity firm in Dublin, Ohio. The Steckels already had a house there, a place she said provided them a homebase during the offseasons.

While he played hockey, she worked as a substitute teacher.

With her sons ready to enter first grade in the fall, Steckel said she’s thinking of returning to college to earn a physical education degree like her father.

“I’ve never been able to actually teach. I’ve been a substitute teacher all over, but with my husband’s job I’ve never actually been able to have my own classroom,” she said. “So now that I’m substituting again (in Dublin and Olentangy) it’s kind of nice to see what I kind of want to do.”

Steckel already has a bit of experience there. She worked as an eighth grade basketball coach in Dublin while earning her master’s degree, and she’s helped coach her daughter’s basketball team for the past two years.

“It’s been a while. Third grade (coaching) was fun, but I would like to do a little bit older as well,” she said. “I like to come home and help dad out with practices and stuff (at Elmwood). My daughter gets to be his ballgirl whenever she’s in town so it’s kind of cool to see her sit on the bench with him.

“But I definitely would like to coach at some point,” Steckel said.

That, however, will have to wait until after the coronavirus situation dies down.

That’s kept the kids at home and in need of schooling.

“It’s complete chaos many times. My daughter, she’s in third grade so she’s pretty self sufficient and you can set her up on the computer and she does all her work,” she said. “The twins, I have one who loves learning and is all about it and I have one who needs a little bit more of an encouragement. So it’s been trying but luckily it’s kindergarten so there’s been a lot of fun things they can do.

The in-laws are living with them while building a home in the Dublin area, and she said social media has helped keep in touch with her family.

“I don’t know what we’d do without FaceTime. My dad’s so funny. He tries to FaceTime the kids and give them gym lessons, so he’s like my PE teacher over the phone,” she said.

“Life’s pretty good, other than the quarantine at the moment,” Steckel said. “It’s really fun to watch the kids find their interests.”