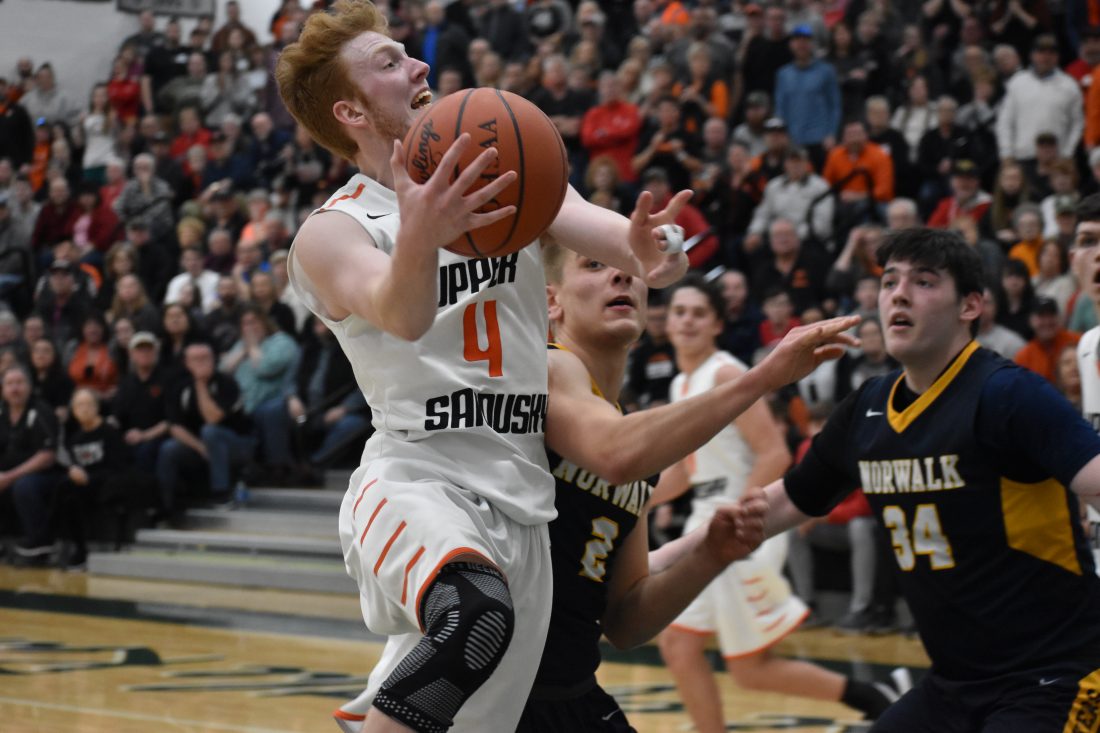 PHOTO BY JOSH MORGRET Upper Sandusky’s Cameron McCreary drives to the basket Saturday in the district final in Mansfield against Norwalk.

Upper Sandusky has hurdled a bunch of roadblocks amid a 24-1 season.

With losing players to injuries, dismissals or just the overall grind of a 16-game Northern 10 Athletic Conference season, the Rams have conquered them all.

Due to the threat of coronavirus spreading, the attendance at tonight’s 6:15 p.m. Division II regional semifinal against Lima Shawnee at Bowling Green State University will be severely limited.

But to Rams coach Jeff Winslow, it’s just another roadblock amongst a season filled with them.

“We addressed it. It’s just another bump in the road and we’ve had so many this year,” he said. “It’s just another one to handle this year. With everything we have been through, we just have to fight and that’s what we’ve done the whole year.

“We just have to concentrate on the task at hand and just move on from the other stuff. I think so far we’ve done a good job of that and we just want to keep playing basketball. That’s our main concern.”

Another concern for the Rams is 25-0 Shawnee.

The Indians, who have beaten teams like Ottawa-Glandorf, Findlay and Lima Senior this season, have conquered every opponent.

In the Defiance win, George Mangas pumped in 40 points, including a 17-of-21 effort shooting in which he he nailed six 3-pointers.

“The first thing that jumps out about them is the Mangas kid,” Winslow said. “The kid just does not miss inside. He’s a guard that posts up and he can drive as well but if he gets a shot inside, it’s going in. He can score in so many ways.

“They also pass the ball very well like us and a lot of different guys can knock down shots. You can’t help too much off one guy or another guy will knock down a shot, it’s a tough cover. But with Mangas averaging 30 (points) per game, you have to start with him and try to limit his touches, but that’s easier said than done.”

Upper Sandusky’s also poses some threats, including two 1,000 point scorers. Evan Young and Cameron McCreary have led the Rams this season offensively, but Winslow said seven Rams have led them in scoring in a game this season.

“We are a tough matchup, honestly with seven different guys capable of leading us in scoring,” he said. “When you have so many unselfish guys, it’s hard to guard any one or two guys we have without giving something up somewhere else and I think that’s been a big part of our success. Young and Cam are basically both point guards who get the offense going and they can both score, but they like to share the ball as well.

“But I think the difference this year has been on the defensive end. Not that in previous years we haven’t been good on that side, these guys have been excellent. Brett Montgomery, Cade Adams and Cole Sowers are just so good defensively.”

Upper Sandusky has always had strong teams on the hardwood, but this year, it’s all came together. Winslow pointed to being senior-laden.

“We’ve always run into some really good teams in some good districts, but this team, being more senior-laden have like 10 district finals between them and they were ready for the moment this year,” Winslow said. “We have good leadership and this team really plays well together.”