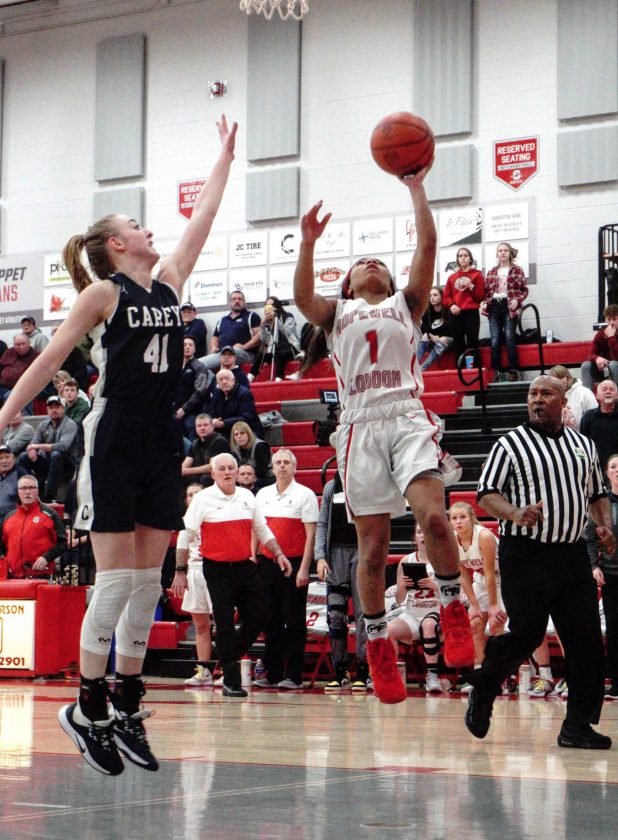 SHELBY — If it felt a little awkward for Hopewell-Loudon’s girls to have been trailing at halftime, it must have been exponentially scary early in the fourth quarter.

Except for junior standout Kaia Woods, that is.

The Chieftains, unbeaten through 24 games with an average margin of victory of 48 points, trailed Carey by 15 points with 5:33 to play.

But full-court pressure brought a bevy of Blue Devil turnovers and Woods was nearly unstoppable in a 32-point, 12-rebound performance as Hopewell-Loudon rallied for a 51-45 overtime win in a Division III district semifinal at Shelby High School here Thursday night.

The win sets up a showdown between the district’s top two seeds Saturday at 3 p.m. Margaretta (23-1) advanced by beating Ashland Crestview 63-47 in Thursday’s second game.

“I’m just so dang proud of these girls,” H-L coach Bob Gase said. “To play a game like that without MaKayla (Elmore, injured All-Ohio post player), wow. That’s what you call believing. Our girls definitely believed in each other and it showed.”

The rally did, in fact, border on the unbelievable.

Emma Wood’s 3-pointer with 20 seconds left in the second period gave Carey a 20-17 lead at the break. The way the Blue Devils came out in the second half showed that edge was no fluke.

Avarie Stewart scored off a Sadie Arend pass and Ellison Roark added two free throws to push the margin to 24-17 a little more than a minute into the third period.

A 6-0 finish to the quarter on a Roark basket and Alaina Tiell’s two from the line and a buzzer-beating drive made it 33-23 for the start of the fourth.

The Chieftains had managed just 8 of 34 from the field at that point with veterans Olivia Zender and Woods limited to 10 and eight points, respectively. To make matters worse, Zender didn’t score again before fouling out with 1:16 left in regulation.

But there was a crack in Carey’s game in that Hopewell-Loudon’s press worked the Blue Devils for eight turnovers even as they extended the lead. Many more were coming.

But the Blue Devils had 11 more turnovers, failed to make another field goal and managed to convert just 5 of 15 from the foul line over the final 5:19.

Right about then, Woods took over at the offensive end. The junior guard used her quickness to repeatedly come up with steals and drive the lane.

Woods started the Chieftain rally with a drive for a three-point play. After Mackenzie Coleman hit a 3-pointer off a Woods pass, Woods then scored Hopewell-Loudon’s last 14 points, including a drive to tie the game at 43-43 and another drive to make it 45-45 with 51 seconds left and send the game into overtime.

“I refuse to lose. That’s my attitude,” Woods said. “I was going to do whatever it took to get the win. My pull-up wasn’t there in the beginning, but I just needed to keep taking shots and stay confident in it and they started to fall.”

Woods put H-L on top for good with a steal and drive with 3:12 left in overtime. Coleman had a foul shot a minute later and Woods finished things with another layup and foul shot over the final 51 seconds.

Carey (17-8), meanwhile, went 0 for 2 both from the field and the line with three more turnovers. The Blue Devils finished with 28 miscues to just 13 for the Chieftains.

“Woods took the ball to the basket and kind of broke us down a little bit,” he said. “But I just come back to those two things — foul shots and just handle the basketball better.”

Gase said the pressure game for the second half came both by design and necessity.

“I didn’t think we could go the whole game pressing,” he said. “So we were trying to save some it for the second half. The girls started picking up on what they had to do.

“We knew we were going to have to get something around (the 28 turnovers),” he said. “When we get a turnover, then Kaia’s got the open floor. We needed that because Carey plays better man than anybody I know as far as help and recovery.”