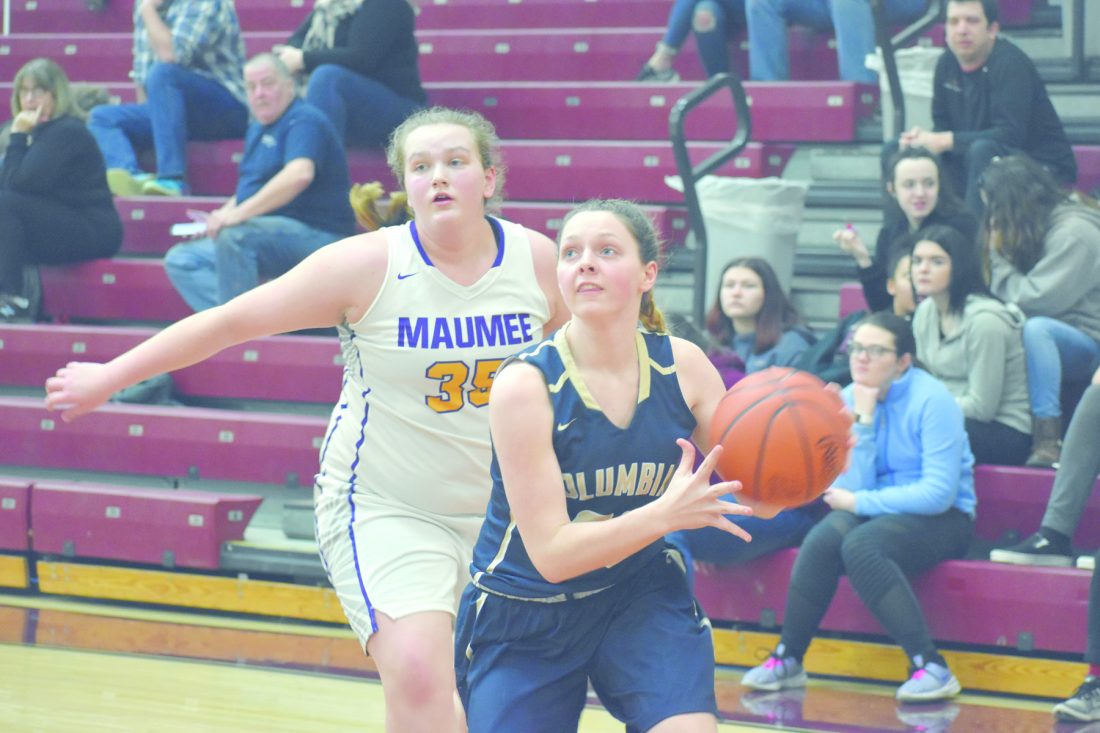 PHOTO BY ZACH BAKER Columbian’s Madi Rice prepares to shoot after getting past Maumee’s Jessica Roper in the Division II first round postseason game at Genoa.

GENOA — Columbian felt good about itself going into halftime of Tuesday’s Division II first round tournament game against Maumee.

It should have. The Tornadoes collected 17 rebounds in the second quarter, limited the Panthers to just six points, and was sporting a comfortable 26-18 advantage.

But for all the optimism, Columbian couldn’t relax.

“When we went in the locker room, everybody was pretty excited about our eight-point lead, and I said, ‘Listen, we’re gonna pretend like we’re starting over,'” TC mentor Amy Cooper said, “because we tend to relax too much in the third quarter. I said, ‘We have to win the next two quarters.'”

The Tornadoes did just that. Behind strong performances from Serena Ingalls, Toria Ingalls and Brook Boes, TC outscored the Panthers 31-20 in the second half, and rolled to a 57-38 win in Genoa.

The Tornadoes will return here Saturday, when they face Toledo Central Catholic at 6:15 p.m.

Tuesday, Serena Ingalls smiled and clapped her hands after the postgame handshake.

She had reason to be excited after finishing with 14 points and nine rebounds.

“The beginning of the season was kinda of rough, but now that we’re on a roll,” she said. “We’re gonna keep it going. So, watch out.”

Also rolling was Boes, who finished with 10 points and nine boards. She also had a couple of big and-1s in the second quarter, helping to put distance between the Tornadoes in Maumee.

“Putbacks helped me a lot today, and obviously rebounds,” Boes said. “I feel like I got a decent amount today.”

Maumee came out hot, converting its first four field goal attempts. But it also turned the ball over eight times in each of the first two quarters, and finished with 21 miscues.

“We had a really good scouting report. We knew that they had a hard time handling the ball, so I told my girls to amp up the pressure even more than we normally do, to take advantage of that,” Cooper said. “That’s what we need to do, and that’s what we seemed to do pretty well tonight.”

The Tornadoes (6-15) got 12 points from Toria Ingalls and eight points from Meredith Obringer.

“We knew that we could not let up,” Cooper said. “We needed to fight all the way through. We needed to have four solid quarters, and I feel like we did that today.”