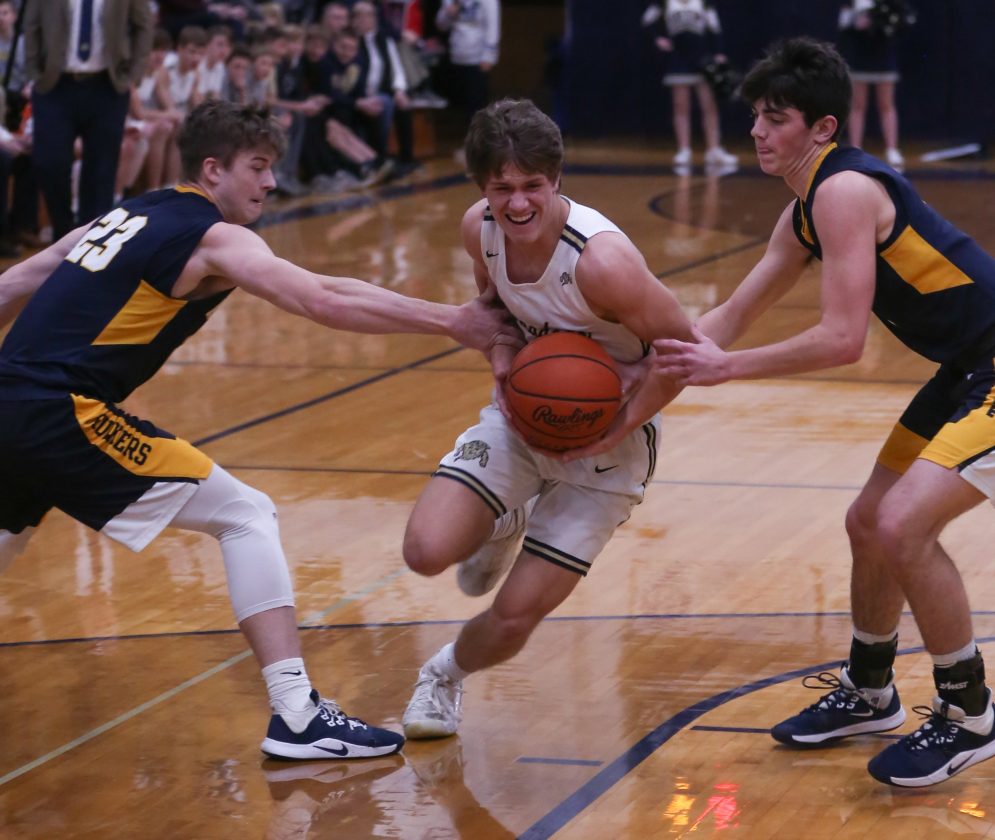 PHOTO BY STEVE WILLIAMS Chase Frankhauser draws contact from Norwalk defenders Garrett Obringer (left) and Will Gehlhausen as he powers his way toward the basket Friday in Tiffin.

Not a bad way to send out three seniors on their home floor one last time.

Columbian, who lost to Norwalk 62-56 Jan. 10, had a chance to deny the Truckers’ second straight Sandusky Bay Conference Lake Division title on its home floor to end the regular season.

It did in dramatic fashion with a 65-62 victory in a double-overtime thriller.

In a back-and-forth affair, Columbian had plenty of chances down the stretch to fend off Norwalk and win in regulation.

The Tornadoes (14-8, 7-5 SBC Lake) led 49-46 after a LJ Reaves stickback with 58.9 seconds remaining in regulation. After a few offensive rebounds and a pair of timeouts by Norwalk coach Steve Gray, the Truckers had a shot to tie with 9.8 seconds left.

Norwalk (15-7, 10-2) missed an open 3-pointer, but Garrett Chapin gathered the rebound with a few ticks left. He ran back to the 3-point stripe and heaved a turnaround triple that banked off the backboard to send the game into overtime.

“We tried to take them out of their sets, but I thought that banked-in 3 was a gut check for our guys. It’s tough to come back from something like that,” Columbian coach Travis Kinn said. “Everyone on the bench had a shellshocked look to them, but what else can you do but smile and enjoy the next four minutes of basketball. This is the last game that some of the guys will play on this floor and all of our guys did not want them going down on a shot like that. Our guys just hads an incredible attitude coming out of that. To say I was concerned would be an understatement, but there is so much fight in this group. They did a tremendous job tonight.

“I’m just really proud of our guys. They did an outstanding job of knowing the scouting report, knowing what they were going to do on the offensive end. We only had six turnovers tonight and we shot the ball well because of good shot selection. We also got to the free throw line (18-28) more than them (10-13) as well.”

In the first four-minute overtime period, Columbian’s Logan Beaston hit a jumper with 2:46 left and then Norwalk’s Kyler Lacy responded with a layup to tie it. The score remained 51-51 heading into the second overtime.

Norwalk took an early 54-52 lead after a Will Gehlhausen layup with 2:24 remaining. Beaston, a standout freshman, responded with a big trey and a pair of free throws to grab a 57-54 advantage with 1:37 left.

Columbian had its biggest lead in double overtime after a three-point play from Carson Goble and a made free throw from Reaves with 47.8 seconds left.

However, Norwalk wouldn’t go away.

Gehlhausen drew a foul behind the 3-point line on the following possession and drained all three.

Even though Columbain proceeded to make 2 of 6 free throws in the last 14 seconds, Norwalk had two costly turnovers that sealed the win for the Tornadoes, including a game-ending steal from Chase Frankhauser with 0.3 seconds remaining.

“I just thought we were one or two plays short,” Norwalk coach Steve Gray said. “Chapin hits an unbelievable shot to send us to (overtime) and we had chances. We just missed a few plays down the stretch. It’s high school sports. It’s what makes it great. If we take care of business next Friday, all of this will be forgotten.

“We said if we get beat one of two things would happen. One is turnovers and the other was if they made 3s. They shoot a normal percentage in the first half, we are up six or eight and we spread them and make them guard us and it’s a different game. Give them credit, they hit some shots. Hats off to Tiffin. Travis did a great job preparing them. Gotta get ready for the tournament.”

The back-and-forth game started in the first quarter as Norwalk led 14-13.

Columbian hit seven 3s in the opening half and led 26-25.

“Even after the first quarter, we were thinking we’d open up the paint a little bit after making those 3s early and that made the lanes a little easier to get to,” Kinn said. “Our guys were really disciplined this week in practice as far as guarding the block and the post and we did a much better job of that than we did last week.”

Chapin led the Truckers with 20 points, while Garrett Obringer chipped in 16 and Will Gehlhausen ended with 13.

For TC, Beaston poured in 16 points, Reaves had 14, Bryce Burns added 10 and Cyrus Burden and Goble each finished with nine.