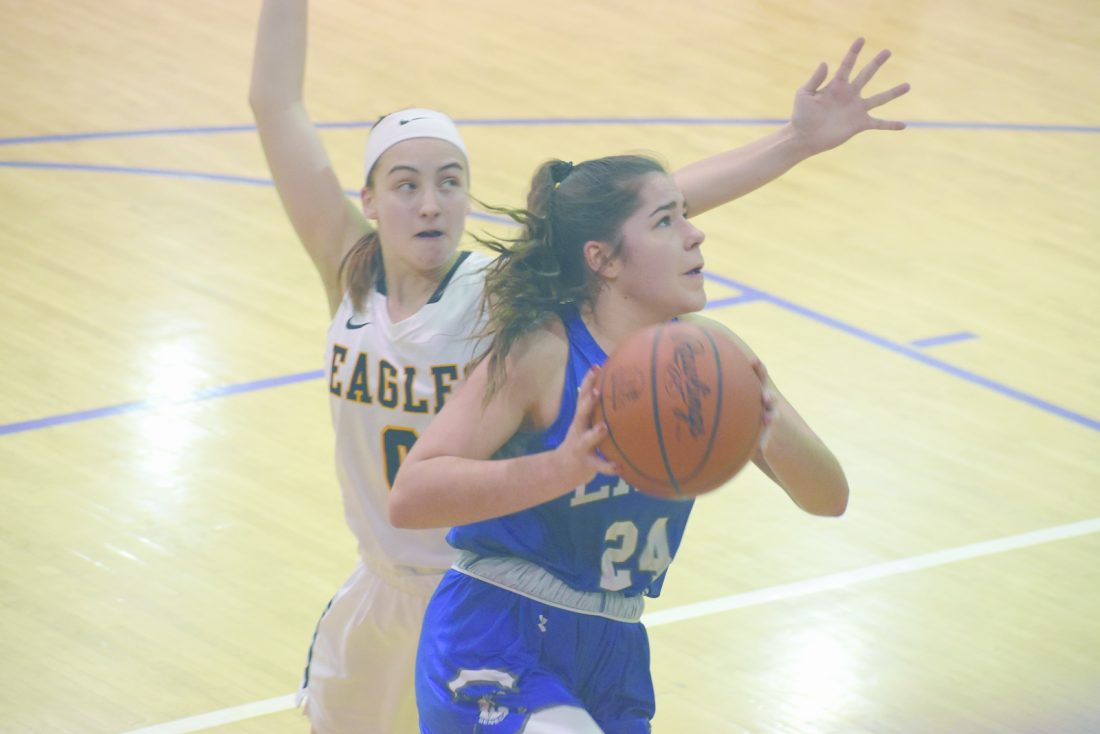 After the game’s conclusion — a game in which the former Rogers’ guard and Division I prospect erupted for 40 points and eight rebounds in a 72-49 Eagles’ win, the Calvert coach made a declaration.

“It’s funny, because all season I’ve heard about (MaKayla) Elmore and (Kaia) Woods at Hopewell-Loudon,” Clark said. “That girl’s the best player I’ve seen. Royal-Davis is the best player that we’ve faced this year.”

Royal-Davis was the driving force as the Eagles fought off a gritty Calvert club to move on to the district semifinals. They will face Ottawa Hills, which got past Old Fort, 40-34, in the evening’s first quarterfinal, at 6:15 p.m. Thursday in Fostoria.

In the nightcap, it took a little while for Royal-Davis to get going. She had only one field goal in the first quarter, and Toledo Christian was up 19-14 on the Senecas at the first stop.

The Eagles had the lead thanks in large part to the foul line. In fact, Toledo Christian’s first nine points came at the stripe.

And she kept working, all game.

“There’s a reason she got 40 points, and she worked for 40 points,” Clark said. “It wasn’t fastbreaks, like you see some players get. She earned every point of that 40.”

But Calvert’s Frannie Webb did everything she could to match Royal-Davis, and in the process, kept the Senecas within striking distance for three quarters.

Webb finished with a career-high 26 points, and added 12 rebounds. She was the only Seneca to score in double figures. But Calvert stayed in the game. It trailed just 36-28 at the break.

“I don’t think I could be prouder of my girls than I was,” Clark said. “Outside of our locker room, I don’t think anybody thought it’d be an eight-point game at halftime. (We) showed what (we’re) made of, (we’re) a scrappy team.”

But Calvert isn’t a deep team. And after Maddie Ball picked up her fourth foul late in third quarter, momentum shifted toward the Eagles. They led 50-40 after three, and started the fourth making nine of their first 10 field goal attempts.

“(Calvert) had really good energy, and I think we wore them down a little bit, too, because we got the press, and we started making baskets,” Wensink said.

Ball returned in the fourth, but was held scoreless after halftime. She finished with four points.

“We rely so much on each other, and when one of those pieces are pulled out…we’re just not deep enough yet,” Clark said. “But we’re gonna be.”

Calvert bowed out at 5-17. The Eagles improved to 19-3. Cat Jones had 11 points and a team-best nine rebounds for Toledo Christian.

But Clark added the loss didn’t detract from the strides the Senecas made in the second half of the season.

“I think if you’ve seen us the last four or five weeks, we’ve come on,” he said. “It’s a different team than what you’ve seen in November. I think we’re gonna be able to build on that.”

Kelsey Shiley scored six for the Senecas, while AJ Hemminger had five.

For Old Fort, the opportunity to advance was there. Despite trailing the Green Bears by seven in the third quarter, the Stockaders got jumpers from Ashlyn Magers and Jordan Reineck to pull within 26-23 heading to the fourth.

The Stockaders used an 8-5 surge at the start of the fourth quarter — capped by a Chloe Wilkinson basket — to draw even at 31 with 4:18 left.

“We didn’t play real well offensively all night, but we got that little run there in the fourth where we got some momentum,” said Old Fort coach Tim Ritzler. “I really felt confident after we got that game tied that we were gonna be able to pull out the victory.”

Instead, the Stockaders managed just three points the rest of the game, and Ottawa Hills pulled away for good on layups by Autumn Richard and Elly Diesen. Two free throws by Richard with 2:27 left gave the Green Bears a 37-32 advantage. A basket by Wilkinson brought the Stockaders within three at the 1:51 mark.

“I think overall, our defense was just phenomenal,” said Ottawa Hills coach Sean Mercer, who used to go up with Ritzler twice a season when Ritzler was at Calvert and the Senecas were part of the Toledo Area Athletic Conference. “We had worked out butts off and watched a lot of film, and were in perfect positions for most of the night; I think our girls talked. So they played as a team, which was great, and I told them, ‘defense wins championships’ and I think there’s no question that’s what won us the game tonight.”

Ottawa Hills’ scoring was spread out. Diesen had a team-best 12 points for Ottawa Hills, while Catherine Byrne and Abbie Westmeyer had eight each and Richard had six. The Bears improved to 11-11.

“That’s what we always talk about…when you play as a team — that’s the beautiful part about basketball — it’s really hard for other basketball teams to beat you,” Mercer said.

“We just couldn’t get the momentum consistently. We hit a few shots here and there to kinda keep us in the game, but we couldn’t hit the shots to give us the lead,” Ritzler said. “I think if we’d have gotten the lead and put the pressure on them, I think we’d have been all right.”