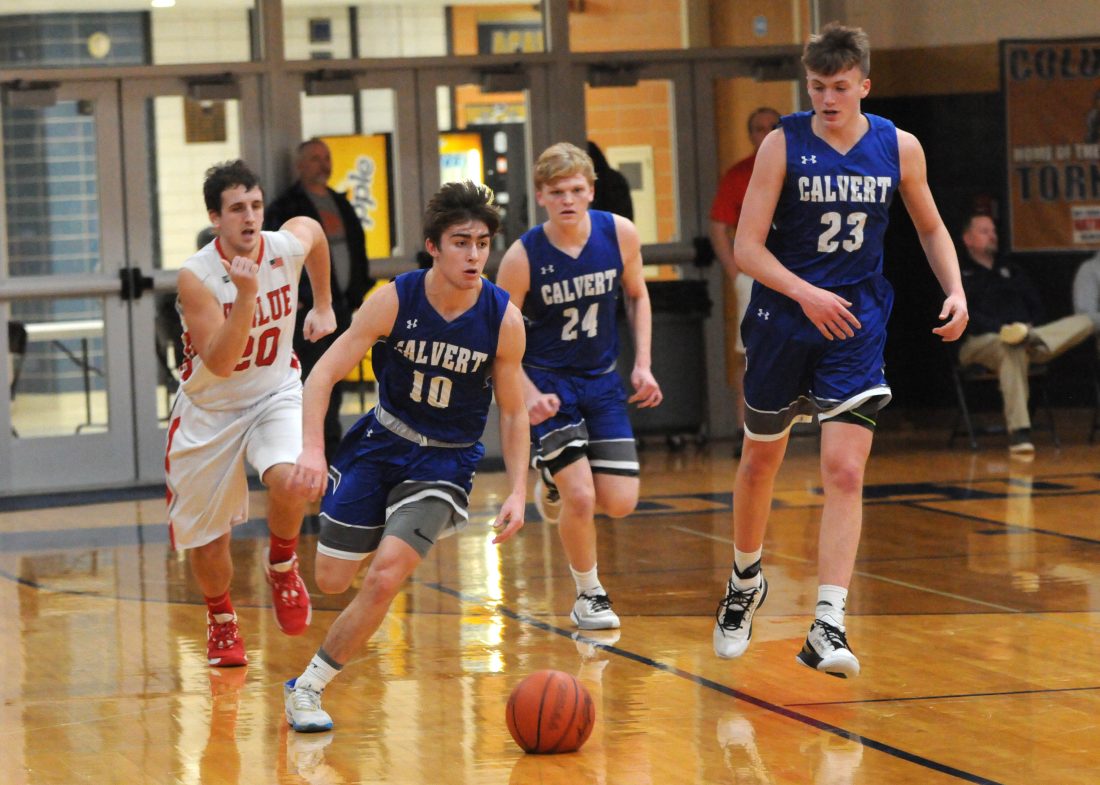 PHOTO BY JONATHON BIRD Calvert’s Jack Shultz forces a turnover as teammates Quin Ronski and Nick Seifert follow him down the court during the first half of a Division IV district quarterfinal against Vanlue at Columbian High School Wednesday.

The two teams split the regular season meetings with the away team winning each time.

“Both teams will be amped and ready to go,” Calvert coach Jon Otterbacher said. “It’ll be a good sectional final game.”

“This is my first senior class all the way through since they’re freshmen. This one’s tough; I’m going to miss that group because these guys really put in a lot of work and progressively got better every year.”

Arcadia jumped ahead first, converting its looks inside and turning over Fremont St. Joseph three times in five possessions by implementing its full-court press.

The Redskins built a 9-4 lead midway through, only to see it evaporate in a hurry.

Michael scored seven points as the Crimson Streaks closed on a 9-2 run to lead 13-11 at quarter’s end.

Fremont St. Joseph kept it going in the second frame.

With the last four points of the first, the Crimson Streaks continued a string of unanswered points — 17 in all — to lead 26-11 capped by Michael’s 3-ball.

“What they mainly did is they got the ball out in transition,” Baker said. “.. I think we were just too hungry for (offensive) boards tonight.

“…That Michael kid is incredible. We wanted to face guard him. He torched us early in the year when we played him.”

Michael finished with a game-high 26 points, including three 3’s, and six rebounds.

Arcadia’s Justen Stoner ended the drought by hitting a 3 at the 4:11 mark.

The Crimson Streaks took a 34-20 lead into halftime and kept ahead of the Redskins by eight points the rest of the way.

Arcadia did cut it to 42-35 late in the third, but surrendered six points in the final minute — the last two on an offensive putback by Brady Deck off a missed free throw.

“We talk all the time about mental toughness, knowing time and situation,” Baker said.

In the second game,

Garrett Spaun scored 15 of his 23 points in the first half as Calvert went up 42-26 at the break.

Vanlue coach John Kloepfer attributed the start to “coming out sluggish” for the most part.

“(We) did a good job of getting to the basket, attacking their gaps,” Otterbacher said. “Their 1-3-1 is really good and they trap well out of it.

“We’re trying to minimize as many mistakes as we could and get the ball to the middle, attacking from that.”

Calvert put the game well away by opening the third frame on a 10-2 run, getting four points apiece from Spaun and NIck Seifert.

“We expect a lot out of those two; they’re our leaders,” Otterbacher said of Spaun and Seifert.

Joey Bonham’s 25 points and three steals fronted the Wildcats who enjoyed their first double-digit win since going 16-6 in 2012-13.

“We’ve improved a lot along the way,” John Kloepfer said. “We’ve got to get better. From the past, at least now we’re playing some basketball and doing some things better.”