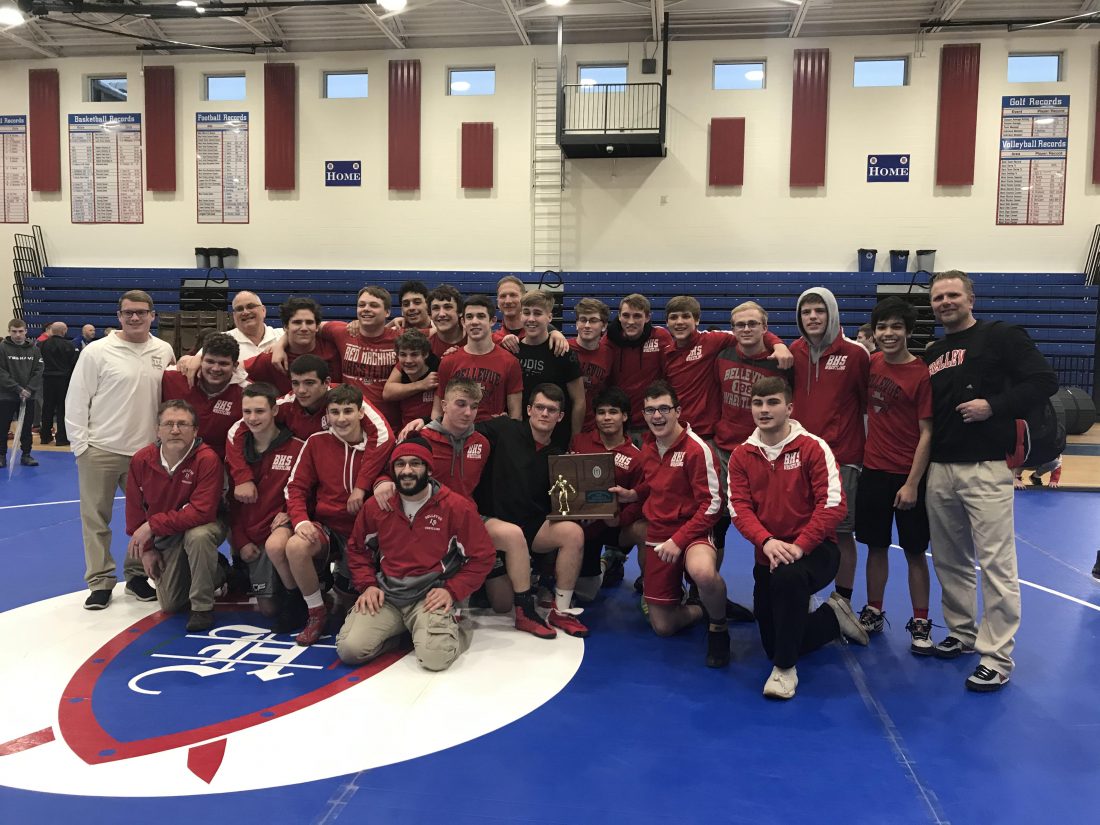 Bellevue wrestlers have gone to state before, but not like this.

The Redmen will compete in the state dual team tournament for the first time when the eighth annual event kicks off Sunday at 11 a.m. at Ohio State University’s St. John Arena.

The Redmen got there this year by beating fellow Sandusky Bay Conference Lake Division member Columbian 48-25 for the Division II Region 9 title this past Saturday.

Before Saturday, the furthest Bellevue had gone in the dual team tournament was the regional semifinals, with the most recent trip there coming last year when the Redmen fell 39-33 to eventual regional champion West Holmes 39-33.

Along with the foes on the mat this year, Adkins said the Redmen also had to overcome several injuries and lineup changes in the weeks building up to the regional tournament.

“We knew we had the talent, it was just getting everybody in the right way and in the lineup, and it finally came around pretty much in the nick of time,” he said.

“It’s all coming together,” Adkins said. “We’ve got all these injuries and they’re all back in the lineup, so it came just in time, really.”

While the injuries have affected the conditioning of some of his grapplers, Adkins said there is a positive side to the situation.

“It could be looked at as a blessing. For one, wrestling is a very long season. I think it’s the longest season of any sport, really. It can wear and tear on you a lot,” he said. “A lot of times by the time you get to the end of the season, you’re worn down. A lot of these guys are coming in and they’re going to be kind of fresh, they haven’t been beaten down throughout the whole year.”

If fresh is an advantage, the Redmen will take it.

Their opening-round foe is a familiar one — fellow SBC Lake Division member Perkins takes the mat against them in the 11 a.m. bout.

“It’s kind of weird to go all the way down to state and see somebody we wrestle all the time,” Adkins said.

“We’ve dealt with a lot of injuries this year and when we wrestled them, we were actually missing eight of our starters,” Adkins said.

Even with everyone now healthy, the Redmen won’t fill every weight class – 106 is open. But they do boast a solid, talented core.

Injuries kept freshman Max Ray (145), a junior high state champ last year, out of the lineup until recently, but he is already becoming a force.

And all of the Redmen are gelling right when they need to, coach Adkins said.

“I think, just as a team, we’re coming together at the right time. I think everybody’s doing their part. I can’t think of any individual that’s sticking out above anybody else,” he said. “I think it’s just been a team effort and we’re just getting the ball rolling at the right time.”