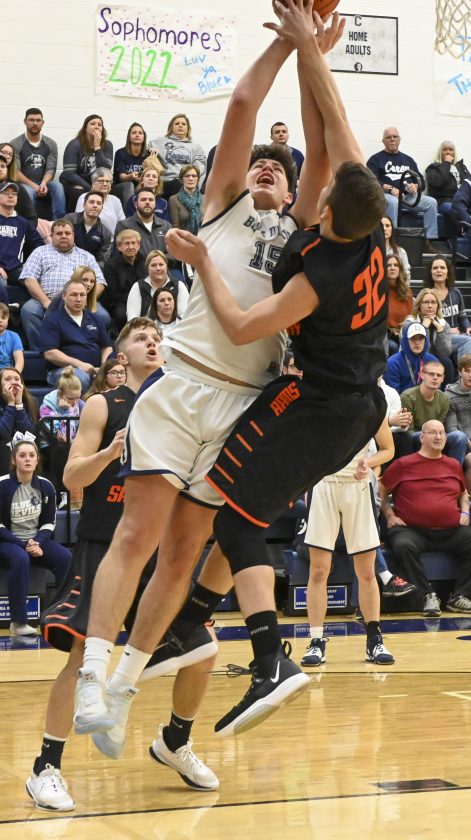 Upper Sandusky had no interest in sharing any piece of a league championship when it traveled to rival Carey on Monday.

The Rams withheld a surge by Carey and pulled away for a 59-43 Northern 10 Athletic Conference win, securing Upper Sandusky’s fourth league title in five years.

“The league title is great,” Upper Sandusky coach Jeff Winslow said. “The kids did not like that feeling last year when we came up a little bit short. We had to win that last game against Mohawk and did not. It has been in the back of their mind since that game to get back to this point.”

After improving to 20-1 overall and 15-0 in N10 action, it is also the third time in five years the Rams have won at least 20 games in the regular season.

“Winning is not easy,” Winslow said. “Honestly, it is a tribute to these kids because the people below these kids all see what it feels like so they work their tail off year-round at basketball. They are in the weight room and they are working on their game.”

Upper Sandusky found itself ahead 27-16 after 3-pointers by Cade Adams and Evan Young, forcing Carey into a timeout with 5:12 left in the second quarter.

“We were getting good looks offensively,” Carey coach Jaime Young said. “We just could not knock down shots. Upper Sandusky goes down there and they are an explosive team. They go on their little runs and they will hit two or three 3s in a row and then you have to take a timeout.”

From there, the Blue Devils (11-10, 8-7) played their best defensive stretch of the night. First, Hayden Stone scored before both teams went scoreless for more than three minutes. Gavin Carey hit a jumper for the Rams, but a three-point play by Isaiah Hoepf and two free throws by Hoepf drew Carey within 29-23 at halftime.

Stone opened the second half with a jumper to draw the Blue Devils within four points, but that was as close as Carey got. Upper Sandusky responded with nine straight points — capped on a score by Young for a 38-25 lead with 4:28 left in the third quarter.

The teams exchanged scores for the rest of the quarter and the Rams led, 47-34, after three quarters. Consecutive buckets by Adams and Trent Beamer extended the lead for Upper Sandusky early in the fourth quarter. Fifteen points was all the closer the Blue Devils got, as the damage had been done.

“Upper Sandusky is relentless and they are a really good squad,” Young said. “They have the resume with some of their wins to prove it. You just try to keep it going.”

The teams played evenly for most of the first quarter. The Rams held a 13-10 advantage after Young scored on a putback, but Carey pushed ahead 14-13. Upper Sandusky finished the quarter strong, getting five straight points from Cameron McCreary for a 18-14 lead after eight minutes.

“We tried to take Hayden away,” Winslow said. “He is really good. One thing he did tonight is he hit quite a few jump shots. We do not want him at 6-foot-8 scoring down low. We were going to concede the outside shot a little bit.”

The next leading scorer for the Blue Devils though, was Hoepf with seven points. Carey made just 1 of 9 3-pointers on the night.

“Hayden could not do everything tonight,” Young said. “We needed somebody to step up and hit a couple shots. We had outside shots to hit — good looks — and we could not knock them down.”

“Carey is a big rivalry game with everybody knowing everybody,” Winslow said. “We knew Carey was going to come out with a lot of energy. We thought it was really important to withstand that initial surge that they were going to have.”