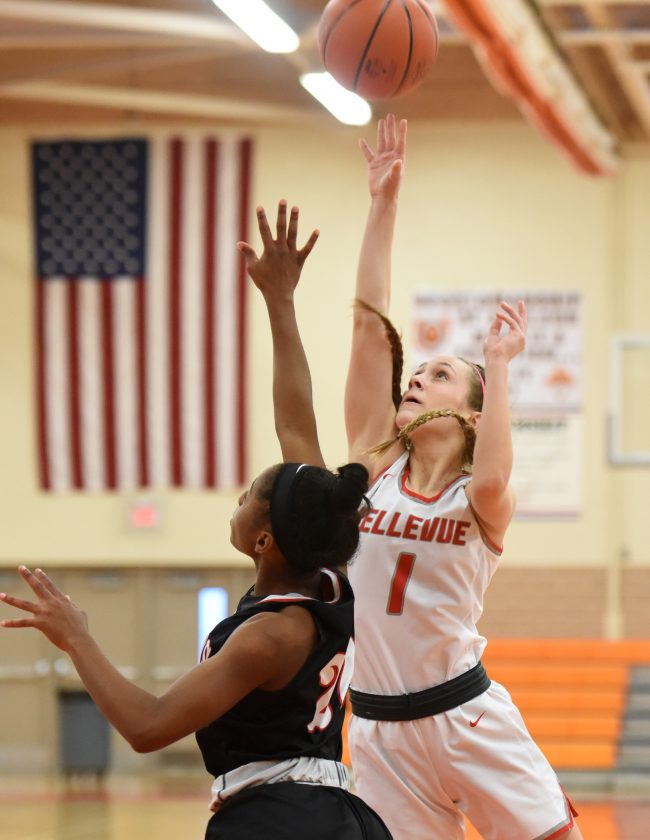 ASHLAND — With every fourth-quarter basket, the Perkins bench and crowd got louder and Pirates coach Brian Heck grew more intense. And he was quite intense 45 minutes before tipoff.

Could the Pirates feel it?

“As much as I don’t want to say I’m floating, I knew we had a chance to get them,” an emotional Heck said after his scrappy underdogs defeated Bellevue 63-59 in a Division II Ashland district semifinal Thursday night.

With the Perkins crowd on its feet and the Pirates bench looking like a mosh pit at a rock concert, the fourth-seeded Pirates (20-4) pulled off one of the biggest upsets in the tournament, knocking off No. 2-ranked Bellevue, which finished another banner season at 23-2.

“I’ve never had five days to prep for Bellevue,” Heck said. “This is the first time and they executed perfectly.”

The list of heroes for Perkins was a long one. From 6-foot-1 sophomore Kelley Baker blocking shots and asserting herself enough to score seven points and grab 11 rebounds, to freshman Cameron Kaufman’s putback that gave Perkins a 52-51 lead with 4:11 to play, every Pirate played a big role.

And then there was sophomore Demi Aaron. With 1:02 to play, Bellevue had pulled to within 60-59 on Gabby Turner’s fourth 3-pointer. Perkins called timeout and took the ball out in front of its own bench. Aaron broke toward the basket and Baker hit her for an open layup and 62-59 lead.

“I was supposed to go the opposite way but everyone was guarding on one side so I went the other way, which left me a wide-open layup,” Aaron said. “I was excited.”

“It was a read,” Heck said. “We were trying to curl her out and have Liv curl out underneath. They were playing on the high side so she just took off with no safety help and she made the layup.

“We were just counting down. When you have Casey (Santoro) out there, no lead is safe. I just wanted it to be a two-possession game.”

Bellevue senior guard Casey Santoro led the Lady Red with 27 points, making 10 of 25 shots from the field. Cory Santoro added 18 for Bellevue, which led by 13 points early in the second half on a Turner 3.

Perkins, which lost by 15 and 13 points to Bellevue in the regular season, began chipping away at the lead. A Kaufman basket made it 47-43 after three quarters and Perkins ran off 10 straight points midway through the final quarter to take 55-51 lead. Howard and Avery Bing hit big 3-pointers in the run, and suddenly a Perkins win was a very real possibility.

After Aaron’s clutch layup, a Baker blocked shot gave Perkins the ball and Howard made one free throw with 26 seconds left to make it a two-possession game at 63-59. It was enough.

“Our girls didn’t shy away from (driving to the basket), but she’s a force inside,” Bellevue coach Kory Santoro said of Baker, who seemed to play with more confidence as the game wore on.

“It was a matter of who was going to make a couple plays down the stretch,” Heck said. “Our girls were sucking air so bad, just gutting it out. I couldn’t be more proud. I’m proud of the school, I’m proud of my girls. I’m proud of all the alumni who come and support us. This was a school and program win.”

“Perkins played well and we did a lot of uncharacteristic things. We turned the ball over way too much,” Coach Santoro said. “Tonight I don’t know what happened. I don’t know if the moment was too big for some girls.

Heck, who called the bench “unbelievable,” credited his five guards — Howard, Aaron, Kaufman, Abriye’ Skelton and Brenna Jenkins — with making life just tough enough for the Santoro sisters. The plan defensively was to trap in the corners and stick with the Santoro sisters.

“You’re not going to find five better defensive guards in the state of Ohio,” Heck said. “They’re not very big so I can’t have all five on the floor, but I have a 6-1 girl blocking shots when we funnel them

Heck was emotionally spent afterward, soaking in the Pirates’ first win over Bellevue in many years.

“I knew that it could happen. We had as good a chance as anyone in Ohio to beat them,” Heck added. “We’re rolling right now. We’re playing off each other, obviously playing our best ball of the year.”