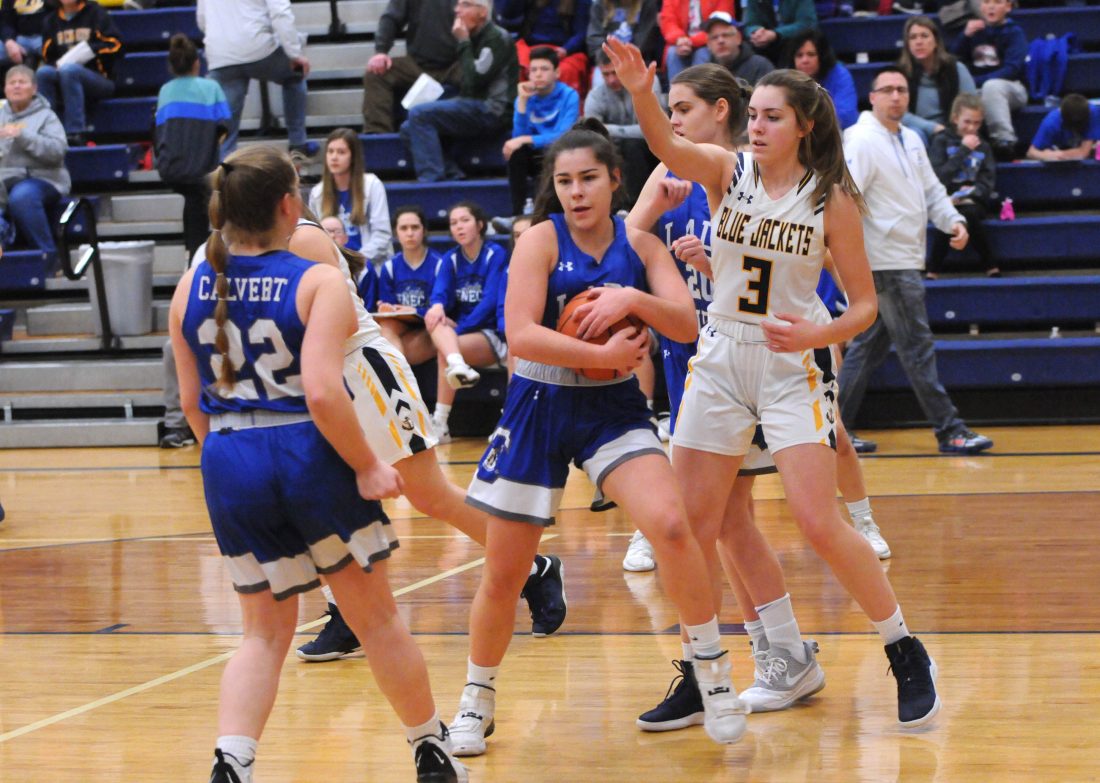 PHOTO BY JONATHON BIRD Calvert’s Madison Ball grabs a rebound while defended by New Riegel’s Jordan Hohman as teammate Kelsey Shiley looks on during the first half of a basketball game Thursday in New Riegel.

NEW RIEGEL — With the postseason right around the corner, Thursday’s matchup between Calvert and New Riegel didn’t go as planned.

With a combined 53 turnovers in the contest, it was New Riegel which separated in the second half to grab a 53-33 Sandusky Bay Conference River Division victory.

“We didn’t execute. We didn’t run our offense that we had been running the last four or five weeks at all in the second half,” Calvert coach Josh Clark said. “When you make dumb passes, you don’t stop and look through the pass, that’s what happens — 31 turnovers. I think that’s the most we’ve had since our fourth or fifth week of the season.”

New Riegel won, but with just one regular season game remaining before the tournament, 22 turnovers was alarming for New Riegel coach Cindy Walerius.

“They just knew whenever we drove the ball into the lane, they tied us up so many times and so defensively, (Calvert) did a great job on (Brooklyn Gillig),” she said. “We were just very careless with the ball. We told them that at the half and in the second half we got a little better, but not really. I think we are averaging 14 and we had (22). That just shouldn’t happen 21 games into the season. We should be handling the ball better than that. We will be discussing that (today).”

With Calvert’s Maddie Schumacher locking down Gillig (seven points, eight assists, seven rebounds) for the most part, Aubrey Bouillon stepped up for the Blue Jackets with 19 points and eight rebounds, including some timely 3-pointers.

“I think Schumacher is one of the best on-ball defenders in the league. I think the only one that is probably better is Kaia Woods (Hopewell-Loudon),” Clark said about Schumacher’s defense on Gillig. “I would put her against anybody and that’s why we put her on their best player. Night in and night out, she limits the damage of their best player.”

Calvert was right with the Blue Jackets in the first half but a Bouillon triple with 4.2 left gave them the six-point edge and momentum into the half. It showed in the beginning of the second half as they went on an 8-2 run to begin the half to gain some separation. Bouillon drilled her third triple of the contest in the run.

Schumacher brought the Senecas within 38-29 after three quarters with a 3 of her own to end the third quarter.

“I give all the credit to New Riegel,” Clark said. “They are a great-coached team and they were ready to play tonight.”

“I just hope we continue to believe in ourselves. I think we can have a good run in the tournament,” Walerius said. “We’ve got a good all-around team, but we have to clean up the turnovers. Other than that, I think we played pretty well and we have been.

“I think we matchup with people pretty well with some good posts and guards. Our posts have come a long way from the beginning of the season, so we look to make a tournament push. North Baltimore will be a good test for us, so I’m looking forward to that as well.”

Calvert plays Gibsonburg for the third time in the first round of the tournament Tuesday at 8 p.m. at Fremont Ross.

“Hope we can get a little redemption for our team. Last game played them we were up 17 at half and we ended up losing by two,” Clark said. “We just stopped playing basketball. Since then, we’ve played a lot better. I think that was our wakeup call. We just have to play four quarters.”