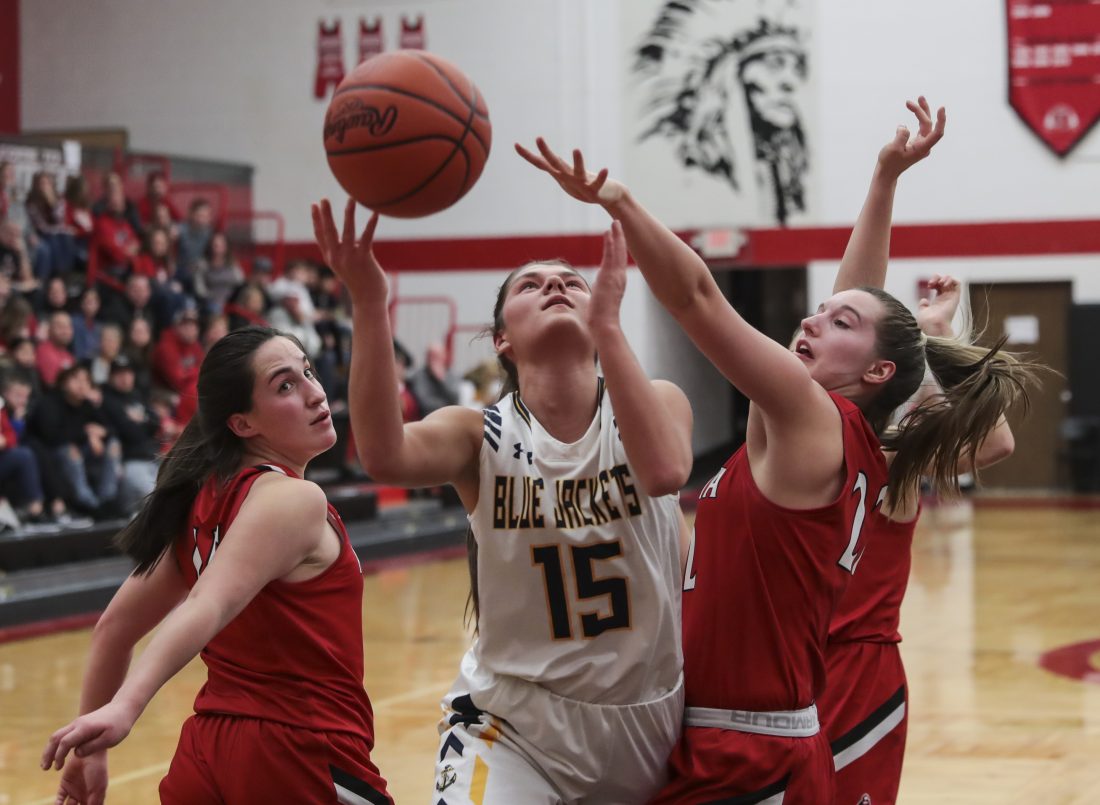 FOSTORIA — Reagan Pratt scored 20 points — including 12 from 3-point range — to lead No. 3 seed Arcadia past No. 2 seed New Riegel 50-33 in a District IV semifinal at Fostoria High School on Thursday.

“When we played them during the year about three weeks ago we weren’t very aggressive, we just stood around and we needed to pick it up,” Arcadia coach Randy Baker said. “We talked about it: with our aggression we have to be aggressive but we can’t be stupid with reaching and stuff.

“I think we played pretty aggressive defense, had good position. I think we rebounded pretty well too, for the most part.”

The Redskins advance to Saturday’s district final at FHS at 7 p.m. to face Toledo Christian. The Eagles earned their berth in the final with a 55-49 victory over Ottawa Hills in the night’s first semifinal.

Arcadia never trailed, building a 15-6 lead after the first quarter and extending the edge to 27-12 at halftime.

“I think the first three possessions we had a turnover,” New Riegel coach Cindy Walerius said. “They just got very aggressive defensively and (the referees) let them play tonight. We didn’t figure that out until the second half.”

The Redskins led by as much as 25 points when Lyndee Ward’s field goal in the opening minute of the fourth quarter brought the score to 46-21. From that point the Blue Jackets outscored Arcadia 15-8 in the quarter, but the rally was far too late to make a difference for New Riegel.

“We were out of synch with how aggressive they were and how they were allowed to bump and bang,” Walerius said. “We’re just not used to being that physical. That’s one thing we definitely talked about, we have to be more physical by next year.”

In addition to their assertive defense, the Redskins had a 26-17 rebounding advantage and shot 54 percent (19-35) from the floor while New Riegel shot just 36 percent (13-36). Arcadia went 8 of 9 from 3-point range, led by Pratt and three treys by Caity Cramer.

“When we (hit shots) we play pretty decent, we get on a roll,” Baker said. “Sometimes when we come out, we don’t shoot the ball well it affects everything else that we do. When we come out and shoot well we’re focused on what we’re doing and we’re ready to play and that makes a big difference.”

Cramer was also in double digits for Arcadia with 11 points while Ward led on the boards with seven rebounds and Lenci Rodriguez had a team best four steals to go with eight points.