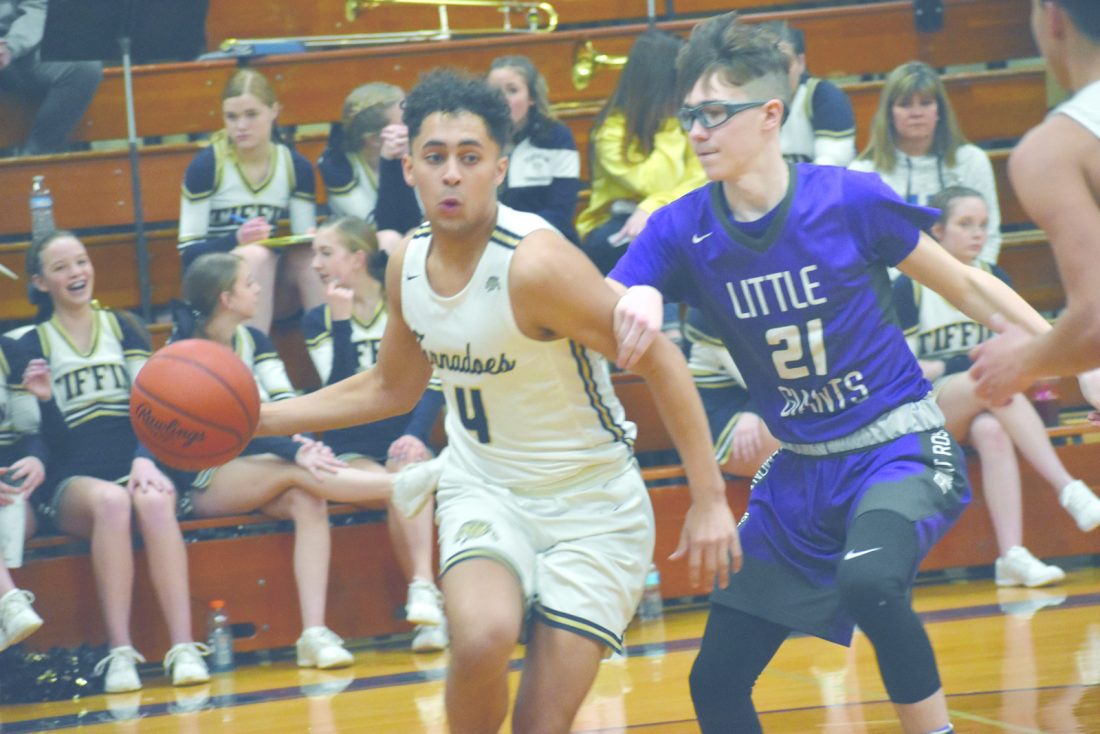 PHOTO BY ZACH BAKER Columbian’s Cyrus Burden whips a pass to a teammate while being defended by Fremont Ross’ Jared Adkins Saturday in Tiffin.

Twice in the final half minute of regulation, Columbian had a chance to tie Fremont Ross.

The Tornadoes had two looks at the basket. And they had the right guy with the ball each time.

LJ Reaves had a career night Saturday against the Little Giants, finishing with 34 points and 12 rebounds.

With less than 20 seconds left, Reaves had a good look at a potential game-tying jumper. It missed, and Ross’ Anthony Vann grabbed the rebound and passed to teammate Labronze Barnett, who was fouled with 10 seconds left.

Barnett made the first free throw and missed the second, putting the Little Giants up 66-63.

Reaves attempted a tying 3, but again the shot missed. Time expired, and Ross held on to win.

“LJ had two good looks there at the end of the game tonight,” Columbian coach Travis Kinn said. “That’s whose hands we wanted the ball in. He was having a great night scoring the ball and getting to the rim. He hit two 3s early, (he was) knocking down free throws. You leave the ball in his hands, hope he can make a play and see what happens.”

Columbian lost for the second time in two days. It lost 84-74 Friday to Clyde. Prior to that, the Tornadoes won seven straight games. They stand at 13-8 with one regular season game remaining. They host Norwalk next Friday.

When asked about his team’s defense late in the fourth quarter Saturday, coach John Cahill was frank.

“I’d like to say it was great defense, but I think we kinda caught a break,” Cahill said. “(Reaves) was phenomenal tonight. I thought a lot of kids step up and play well, but LJ was really, really good. He’s a talented kid … but we caught some breaks late, and found a way to get a key rebound from (Vann).”

Vann also was clutch on the offensive side. The freshman scored 26 points, which included three clutch field goals in the fourth quarter.

“We’ve had two freshmen play really big roles on this team with he and Kaden Holmes … two sophomores play very big roles, so I think this is a game that’s going to be a fun game, because Tiffin has a lot of great young talent,” Cahill said, “and I think we’ve got good, young kids too.”

But the Ross offense cooled in the second half, and the Tornadoes, led by Reaves and Bryce Burns, came back.

Burns, who hit three consecutive 3-pointers during a second quarter stretch, finished with 19 points. He and Reaves combined for all but 10 of the TC points.

“Bryce did a great job in the second quarter especially scoring the ball for us,” Kinn said. “We know when he gets hot, he can shoot the ball well.”

Columbian trailed 48-46 after three, and then Reaves took off, scoring his team’s next six points to put the Tornadoes up 52-48 with 6:04 left. TC got another layup from Reaves, and went up 54-50 at the five minute mark.

But Ross’ Jared Adkins got loose for a couple of 3s. He had five in the game and finished with 15 points. His last one of the game came from the left corner, and put the Little Giants up 62-57 with 3:19 remaining.

The Little Giants outscored Columbian 18-17 in the final quarter.

Reaves scored 15 of the Tornadoes’ points in the fourth.

“I’m really proud of (my team),” said Cahill, who coached the Clyde girls for years. “We play a lot of young guys, and we took an absolute beating last night at Lima. To come from the bus ride home from Lima on a late night, and then to come here tonight and play a team in Tiffin who’s got a lot of young talent and has been playing really well, I think says a lot about our kids.”