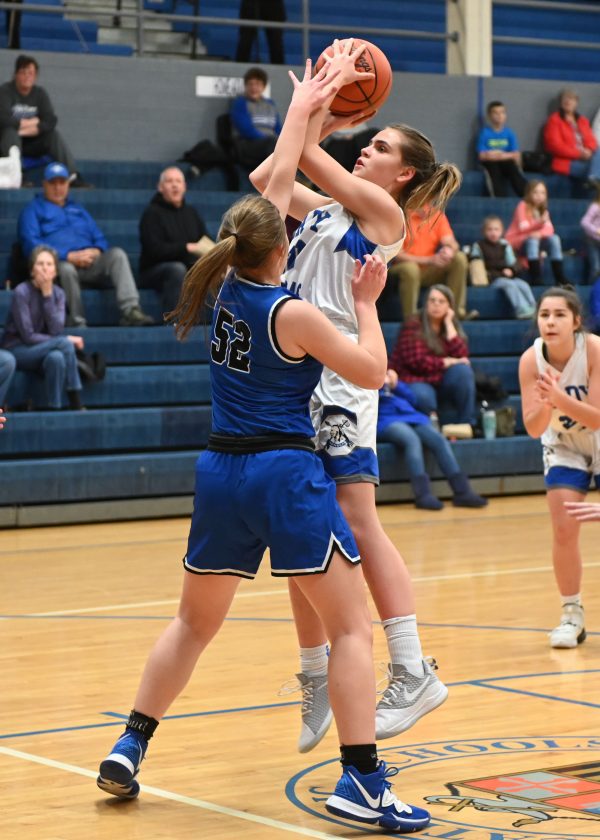 It was the play call that Calvert wanted.

Unfortunately, it certainly was not the situation the Senecas wanted to be in.

Calvert led by eight points with 49 seconds left, but found itself trailing as time ticked away on what once appeared to be a sure win.

In the end, a steal by Danbury on a play designed to go to Frannie Webb led the Lakers to a 44-43 Sandusky Bay Conference River Division win over the Senecas Monday.

“That is how we drew it up,” Calvert coach Josh Clark said. “We wanted the ball in Frannie’s hand at the end for various reasons. She took the first Danbury loss (53-31 at Danbury) personal, so we felt it was only right for her to have that opportunity.”

Gabrielle Maringer took a steal in for a layup with 11 seconds left to give Danbury the lead. Calvert (4-15 overall, 4-11 SBC River) called timeout and pushed the ball upcourt before a jump ball was called with 1.1 seconds left.

After another timeout, the inbounds pass from Maddie Schumacher went towards Webb, but it was knocked away and stolen by Kayla Rodriguez to finish off the improbable win for the Lakers (6-12, 6-7).

“We got in our own heads,” Clark said. “We have a young team and we have to learn to win. Danbury has five seniors over there. That speaks a lot.”

Annie Tibbels split two free throws and Maddie Harris hit a 3 to cut the margin to 43-40 with 38 seconds left. Schumacher was fouled, but missed the front end of the one-and-one. On the other end, Rodriguez scored to bring the Lakers within a point. After a Danbury timeout, the pressure from the Lakers forced an errant pass that Maringer stole to give Danbury the lead.

“We get a little bit of press on us and we panic,” Clark said. “We press everyday in practice. We press just about as good — if not better — than any team we play. We see the pressure, but panic on a man press — something that should be so simple to break.”

The teams were tied at 38 after three quarters, but Calvert had its best stretch of the night over the first half of the quarter. First, Webb hit a high-arcing 3-pointer. Later, Kelsey Shiley scored on an offensive rebound and Hemminger nailed a 3 for a 36-30 lead.

Rodriguez scored on consecutive possessions for Danbury, but Webb and Shiley countered to keep Calvert ahead 40-34 with 3:52 left.

Schumacher also scored the first two baskets of the third quarter to give Calvert its first lead, but Harris connected on a baseline jumper, Rodriguez hit a 3, and a short jumper by Valenti pushed the Lakers ahead 26-21. Calvert had the answer, using a 7-2 run over the final 4:40 of the quarter to knot the game at 28.

“If you look from where we played Danbury last time, we turned around and avenged a loss to St. Joe’s by beating them by 15 points,” Clark said. “We avenged a 15-point loss to St. Mary and beat them here. The second time through, we have played every team much better. I think we have that confidence going forward.”

Rodriguez paced Danbury with 13 points. Valenti grabbed a game-high 13 rebounds to lead the Lakers to a 38-26 rebound edge.

“We are getting there,” Clark said. “We just have to figure how to finish it off. To be up by seven points with 50 seconds left compared to where we were a month ago says a lot about where we are.”

“We did not get a practice last Thursday or Friday because of weather,” Clark said. “Saturday, the school was shut down. We have not been in the gym since Lakota. It was rough.”