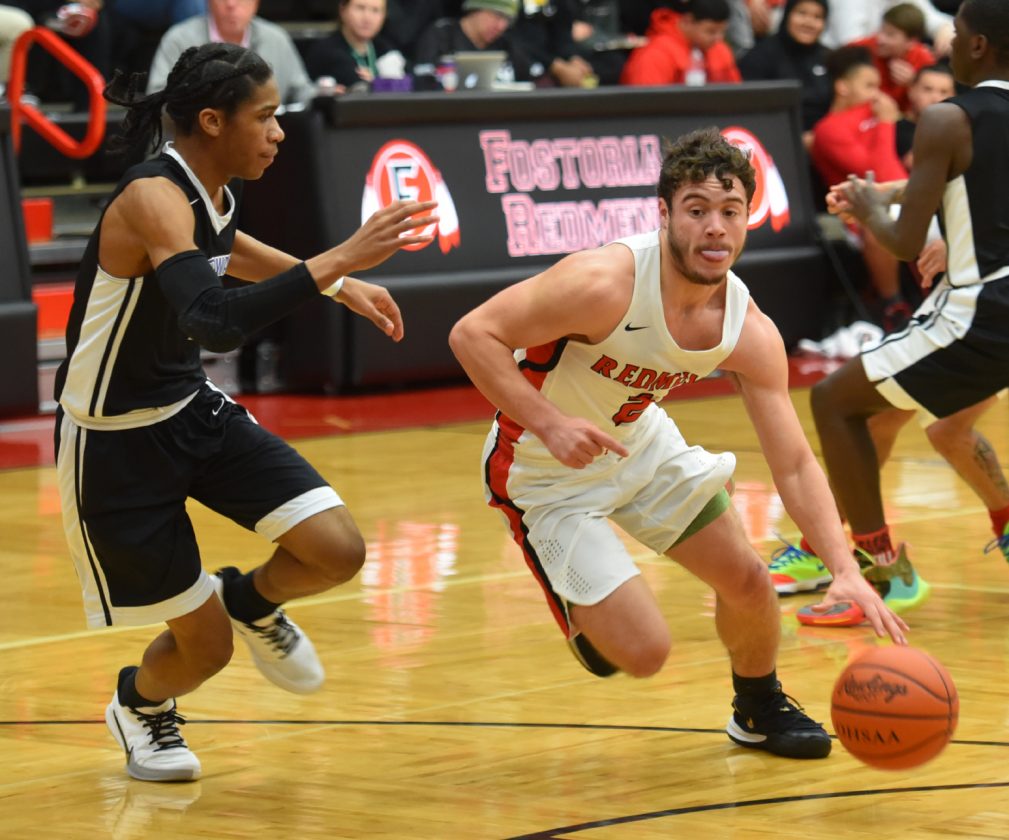 FOSTORIA — As the snow fell outside, it looked as if the Polar Bears would win in a romp.

But the Redmen were hot and Fostoria High School rallied in the second half to beat visiting Toledo Woodward 54-52 in nonconference action Wednesday.

“I can’t be more proud of a group of guys than the effort that we gave tonight,” FHS coach Thom Loomis said.

“It was a rocky start and I think that our guys kind of felt like it was the big boys from Toledo coming down to Fostoria and we kind of had to try and prove that we could play with them. So we just tried too hard and didn’t function real well as a unit.” 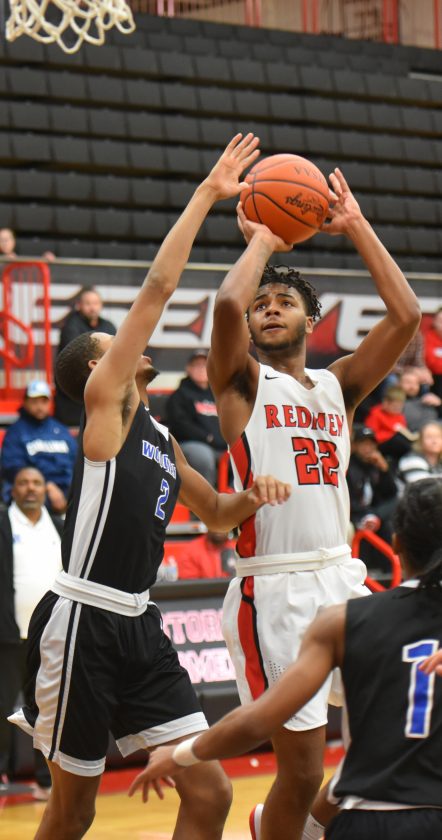 Delveon Lear, the current scoring leader in the Toledo City League, regained the upper hand for the Polar Bears when he converted a one-and-one at 1:59 to knot the score at 49, then scored from inside at 1:34 for a 51-49 advantage. Jonathan Banks Jr. knocked down a trey on Fostoria’s next trip up the floor to go ahead 52-51 at 1:20, and Lear followed with a free throw with 56 seconds remaining to tie the score.

After a timeout, Woodward inbounded the ball and chewed some time off the clock before trying to set up a play, but defensive pressure by Fostoria’s E.J. Williams forced a Woodward turnover with 16 seconds left.

Standing near half court, Williams inbounded the ball across the court to Avondre Reed, who then drove to the hoop, faked a shot and dished the ball to Banks Jr. under the hoop, and he scored the go-ahead bucket with 11.2 seconds left. Lear attempted the final shot at the other end, but it was off the mark and the rebound was a jump ball that went to the Redmen.

“We haven’t always made the adjustments coming out of halftime in the third quarter, even though we’ve talked about it in the same kind of way,” Loomis said. “Tonight the kids bought in and they did what we were asking them to do and that was the difference in the game.”

The Polar Bears used a 13-2 run in the first quarter to go up 15-4 at 1:53. Demetrius Burt (four points), P.J. Dinkins (three), Peyton Reasonover, Caleb Manyweather and Dominic Chizmar all contributed to Woodward’s run. Reed scored all seven of Fostoria’s points in the first quarter and the Redmen trailed 18-7 after one.

The Polar Bears led by as much as 29-16 in the second quarter, but Fostoria rallied and outscored Woodward 10-2 in the last 2:14 to draw within five points. Reed converted a one-and-one, then on an and-1 to cut the lead to 29-21. After a bucket by Lear, Reed canned a 3-pointer with 43 seconds left, then grabbed a defensive rebound to help set up a field goal by Settles with nine seconds remaining in the first half, and the 31-26 score held when time expired.

“They realized when they made the little run to cut it to five at halftime that they could play with (Woodward),” Loomis said. “Once we started playing together as five guys — offensively especially and we talked on defense — that chemistry that we’ve talked a lot about this year really showed.

“They didn’t get down, they never quit battling. I’m just so proud of those guys the way they hung together.”