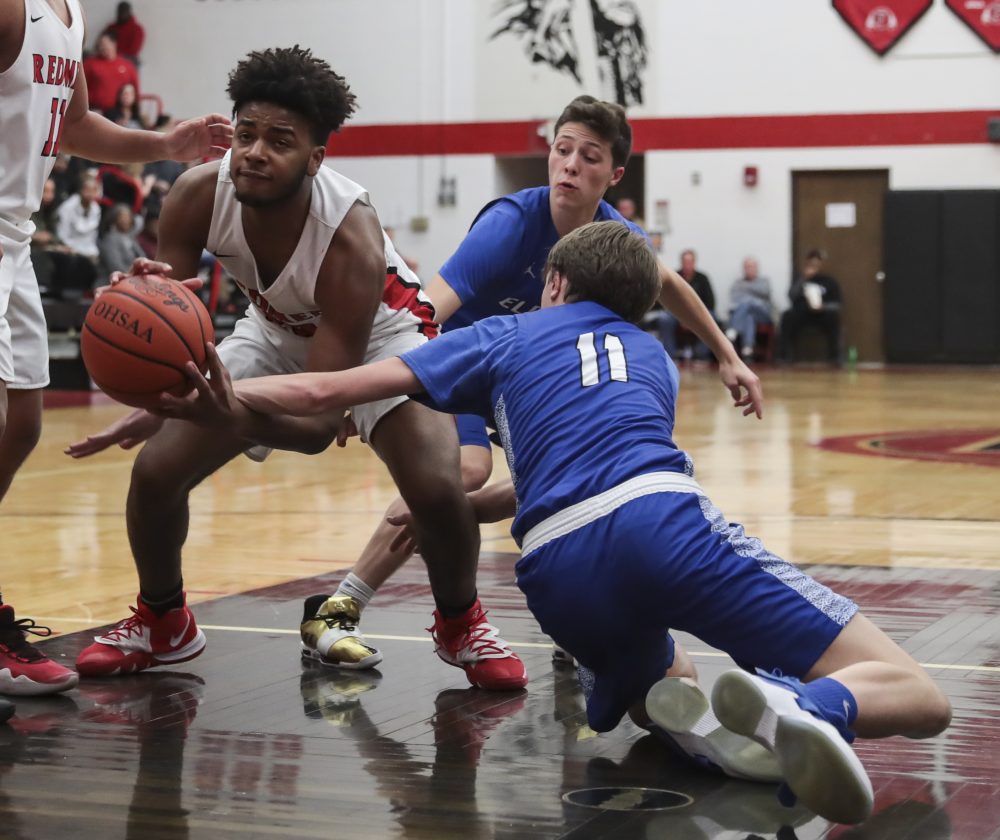 PHOTO BY MATTHIAS LEGUIRE Fostoria’s Jonathan Banks (22) is fouled by Elmwood’s Nick Weiss (11) after he picked up a loose ball and went up for a shot.

FOSTORIA — Maybe it was because it was a rivalry game against Elmwood. Maybe it was wanting to erase Tuesday’s dismal performance against New Riegel. Or maybe it was high emotion from senior night.

Whatever you attribute it to, Fostoria High School’s boys basketball team refused to lose its last regular season game Friday.

The Redmen rallied from a 3-point deficit at the start of the fourth quarter to beat the Royals 62-57 in Northern Buckeye Conference action. With the win the Redmen (15-7 overall) secured second place in the league with an 11-3 record.

EJ Williams scored nine of his 11 points in the fourth quarter while Dom Settles scored eight of his 10 points on the night in the final period.

“I challenged them Tuesday about mental toughness,” Fostoria coach Thom Loomis said. “A large number of these kids who were on our football team this year and … they felt like they underachieved in the football season, and gave away a couple games that they should have won.

“We’ve done the same in basketball, but we’ve made darn sure the ones that really mattered we didn’t do that and tonight was one of those.”

Mason Lentz put Elmwood up 9-5 at 4:20 of the first with five points in the span of 12 seconds, hitting a trey and scoring a fastbreak layup after a Redmen turnover. From that point Elmwood held the lead despite a threat from Fostoria in the second quarter when Zach Ward’s field goal pulled the Redmen to 20-19 at 4:51.

After leading 31-26 at halftime Elmwood pulled ahead by as many as eight points when Lentz’s 3-pointer at 4:31 of the third extended the Royals lead to 40-32. But from that point the Redmen outscored the Royals 11-6 to end the quarter trailing 46-43.

Williams sparked a modest 7-0 run with back-to-back field goals to cut Elmwood’s lead to 48-47 and a 3-pointer by Settles put the Redmen up 50-48, their first lead since the midway through the opening quarter. The Royals regained the advantage (52-50) with a putback by Bryce Reynolds and a pair of free throws by Nick Weiss at 3:57.

Williams’ 3-pointer at 3:26 put the Redmen back up 53-52 and Fostoria extended the lead to 57-52 at 1:44 with five points from Settles and a little help from Elmwood missing the first half of a 1-and-1 twice. Elmwood later drew within 58-57 with a layup by Kobe Shank with 22 seconds to go. But the Redmen staved off the Royals by making free throws when they had to, with Avondre Reed converting 1-and-1 with 16 seconds left and Williams hitting two from the stripe 12 seconds later to extend Fostoria’s lead to 62-57.

The Royals had a chance to make something happen after Reed’s free throws when they moved the ball up court quickly and coach Ty Traxler called a timeout to draw up a play, but a wild pass after inbounding the ball gave possession to the Redmen.

“Then we had a tie game, we miss two front ends on 1-and-1s and they score both times. That’s our problem as a team: we lack the ability most of the time in close games to make a play.”

Reed led all players with 24 points, followed by Williams and Jonathan Banks with 11 apiece and Settles with 10.

Shank and Reynolds paced Elmwood with 12 points each while Caleb Plouck and Lentz each totaled 10.