DeMoss talks about a life in coaching 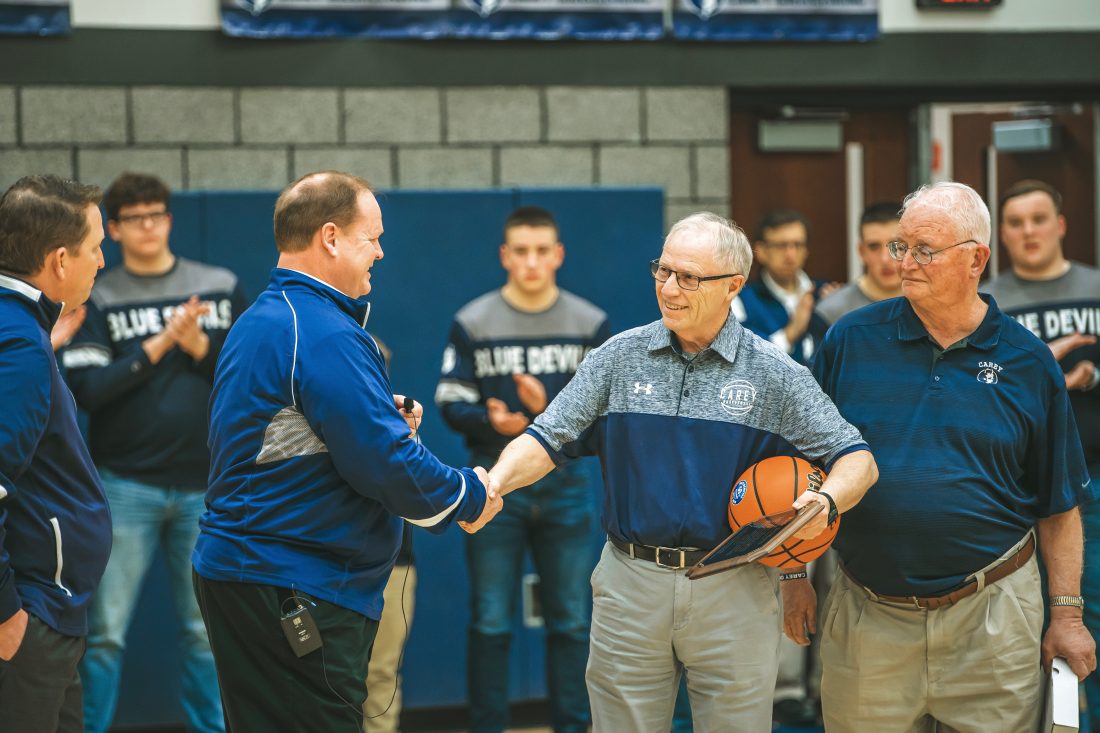 PHOTO BY JOSH GOOD/COURTESY OF MELISSA DEMOSS Carey Superintendent Mike Wank (left) presents a plaque to Carey assistant boys basketball coach Rick DeMoss during a ceremony prior to a game against New Riegel in Carey. Carey Athletic Director Kent Asher also is pictured. DeMoss, who spent more than a quarter century as the head boys basketball coach at New Riegel — where Wank played for him — has been in coaching for 50 years.

You’re on the phone trying to get a hold of Rick DeMoss, now an assistant coach for the boys basketball team at Carey.

“We’re about to start practice,” he says.

For 50 years, coaching has been a part of DeMoss’ life. 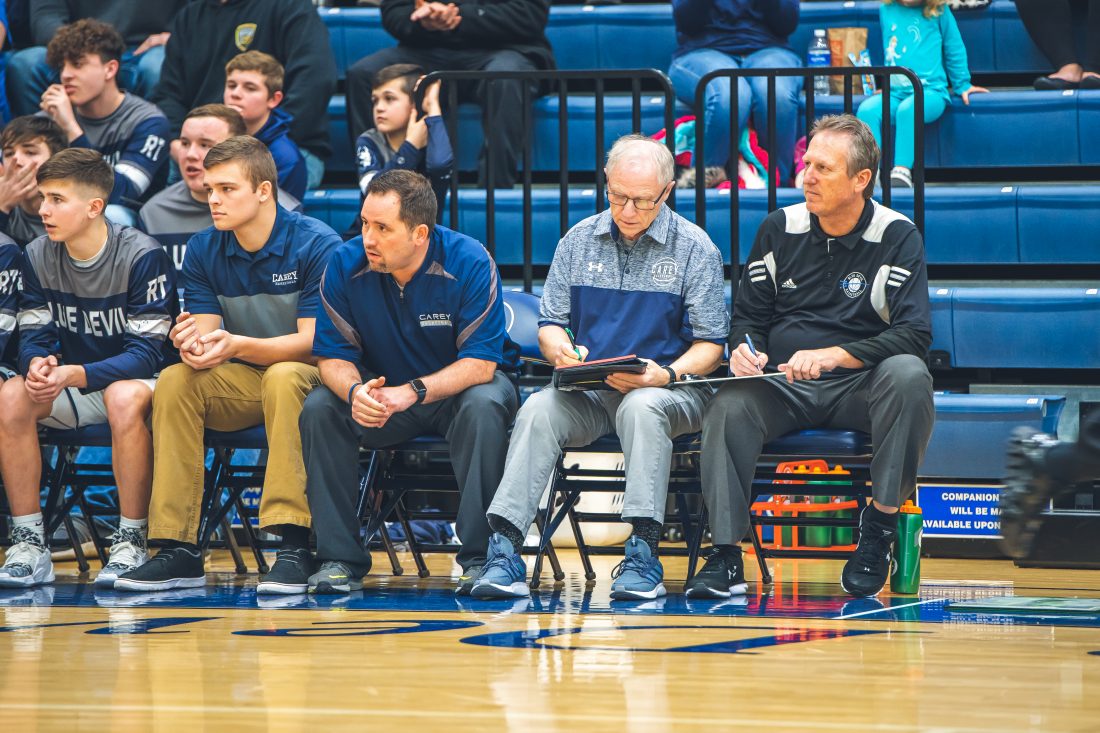 DeMoss was a boys basketball coach at New Riegel from 1977-2003. In that time, he won eight league titles, seven sectional titles, a district championship and — in 1993 — the Blue Jackets finished as a state runner up.

DeMoss also coached softball for 10 years, making it to state in 1991 (“When I did the softball, the girls came up to me and said, ‘We want you to coach us like you would coach the boys,'” DeMoss said). He also coached baseball for three seasons.

“He always gets the best out of us,” said Reece Billock, a senior guard for the Blue Devils. “He is always making a joke out of something. It is awesome playing for him. I just love it. It is fun.”

The superintendent of the school Billock plays for has different memories from his athletic career.

Michael Wank played for DeMoss at New Riegel from 1979-82. A number of Wank’s brothers also played basketball for him, while his sister was on one of DeMoss’ softball teams.

“Rick was fiery, he was in your face,” Wank said. “He’d insist if we’re gonna practice it, we do it well.”

Wank said that when he talks to players today, they are surprised.

“They’ll look at me now and go, ‘Coach DeMoss?,” he said. “He was able to change with the times.”

Maybe that’s the key to DeMoss’ success and longevity. No matter the sport, the players or the town, DeMoss, and his family, made it work.

“It started in 1970, when, having just graduated from Bowling Green State University, DeMoss was interviewing for his first teaching job, at New Riegel.

It wasn’t in an office.

“It was funny. I had my interview with the superintendent, he was new,” DeMoss said. “We sat out in the car. He didn’t have a key to the building. And obviously, I did not. We kind of figured out there were probably other people who had the key, but I had my interview there.”

It was then — after DeMoss had essentially secured that job, that he asked about coaching. He said he was hoping a baseball job was open, but it wasn’t.

There was a coaching job available. But it came with a caveat.

“He said there was a freshman basketball job they thought would be open, if I would want it,” DeMoss said. “The catch was, I had to get a bus driver’s license to get the kids to the game.”

And there was more. DeMoss also became a substitute bus driver for the district.

“I would get a call at 5 o’clock in the morning. ‘Hey, we need a bus driver, and the person that was driving the bus has the bus at his house, which was in Adrian, and that’s halfway between New Riegel and Carey.'”

At the time, DeMoss was living in Fort Seneca. He wasn’t exactly familiar with some of the stops he had to make.

“It was like 20 degrees. So I’m going out there, and it’s cold, and I’m freezing, and they told me where the first stop is at, and they’ll be a little girl there that will tell you where all the stops are at,” DeMoss aid. “She could have taken me to downtown Findlay, for all I was aware of.”

And so, DeMoss’ teaching — and coaching — career began. The next season, he was coaching junior varsity. Six years after that, he had his first varsity head coaching job.

And as the years passed, the wins started piling up.

Even if DeMoss wasn’t aware of the milestones as they arrived.

“We played Arcadia in 1986, and so I’m reading their program before the game, and I’m seeing in there that they’re ‘going to try and stop coach DeMoss from receiving his 100th victory,’ he said. “I had no idea. So I thought at that point, ‘Maybe I ought to start keeping track of these things.’

DeMoss’ team got the victory that night in Arcadia. Seven years later, DeMoss was coaching in the regional finals in Canton.

“The thing with that game is, my wife (Melissa) gets real nervous on the games,” DeMoss said. “She left the Colosseum and sat outside on the park bench.”

As Melissa waited, the crowd from the game was roaring. A man noticed Melissa, and asked her if she was OK.

Melissa said that she was, but she was connected to New Riegel and was nervous.

“(The man) said, ‘Well, you might want to get in there, because they’re just hammering them.’ So she came back in,” DeMoss said. “That’s probably the highlight of the basketball career.”

Family played a big role, and continues to play a big role in DeMoss’ coaching. Three of his nephews played for him. And now, he gets time off from Carey occasionally to see his grandson, Brock Brause, play basketball at Mohawk.

DeMoss said Melissa has been extremely important to his career, but because of the time commitments of coaching, she played nearly every role at home.

“I was missing a lot, and I have two children,” DeMoss said. “She was both mom and dad for a while. You get busy in the evening … I just wasn’t around. I tried not to miss the things they were involved in. But she was always there doing things, making highlight films. … During that tournament run, after games, she’d go home make a highlight film, and we’d play it the next day in school at lunchtime. The kids would just sit there, quiet, watching the game as it goes on.

“She’s been a big part of this. This 50 years wouln’t have occurred without her being there, and helping out and doing the things that needed to be done,” he said. “Sometimes I was home, sometimes I wasn’t. But she was always there.”

His last year as a varsity head coach was that season.

DeMoss has been an assistant at schools since, and after a knee replacement, wasn’t sure if he’d be able to return this season for his 50th year. But when he realized the significance of the season, his wife told him he had to come back.

DeMoss was honored for his coaching career Jan. 30, when New Riegel’s boys played at Carey. Wank was on hand — along with a number of former players and coaches — and presented his former coach with a plaque.

When asked about his playing career, Wank said that DeMoss “kept a spot at the end of the bench for me.”

“It’s interesting how fast time goes,” Wank said. “(As a player, you think), ‘I don’t agree with you; I don’t like you, (but then) you realize you did deserve that spot at the end of the bench.”

“As you grow up and you mature, you appreciate what (coaches) have to pour into their job to be successful,” Wank said. “He always has been demanding of kids, to do it the right way.”

At the same time, Wank said that DeMoss’ ability to adapt is on display.

But some things don’t change.

“Even talking to him now, he’s still a teacher,” Wank said.

“He is a lot quieter than most coaches,” Billock said. “He will keep a lot of things to himself, but I feel like if he got angry, we would not want to mess with him.

“He is always on the bench telling us which way to force the guards,” he said. “He is the only guy I hear when I am playing.”

DeMoss was given a number of things during the ceremony last month. He was presented a basketball, and OHSAA Executive Director Jerry Snodgrass sent scorebooks from New Riegel’s state tournament games, as well as DVDs of the contests.

Finally, those in attendance who played for DeMoss were asked to stand.

“What I would like to have had them do is — ‘people from Carey or anywhere else that I’ve coached against — would you stand up,'” DeMoss said. .

But in 50 years of coaching, DeMoss admitted he never had a moment quite like the one that night.

“A neat experience to have both sides of the gym being in your corner,” he said. “Normally, you’re gonna have one side … it was a lot of fun.”

And then, it was time for another game.

PHOTO BY JOSH GOOD/COURTESY OF MELISSA DEMOSS Carey Superintendent Mike Wank (left) presents a plaque to Carey assistant boys basketball coach Rick DeMoss during a ceremony prior to a game against New Riegel in Carey. Carey Athletic Director Kent Asher also is pictured. DeMoss, who spent more than a quarter century as the head boys basketball coach at New Riegel — where Wank played for him — has been in coaching for 50 years.