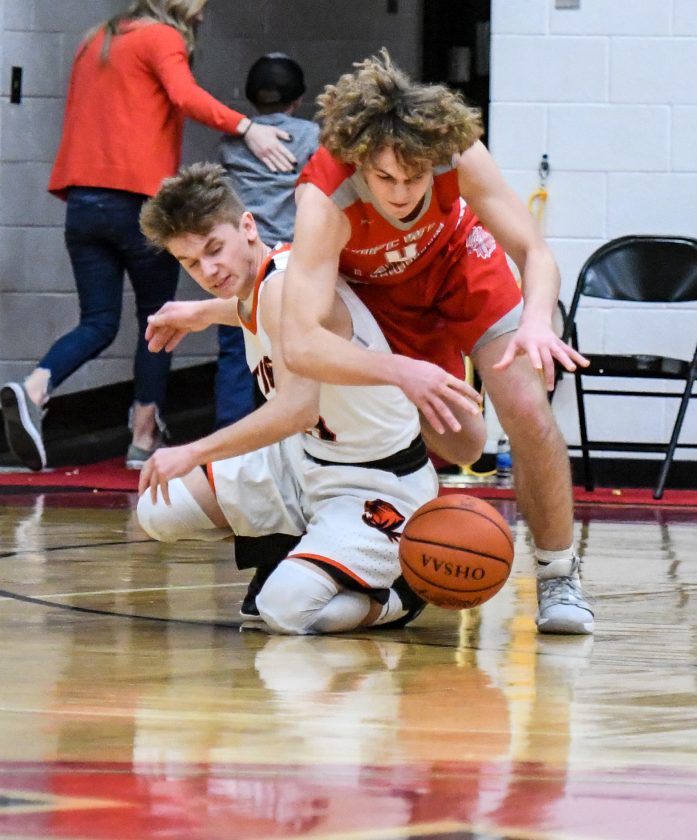 PHOTO BY KENT TARBOX Hopewell-Loudon’s Ried Jury (0) and North Baltimore’s Jaden Bucher (24) try to get to a ball on the floor Wednesday during the Division IV opening round at Fostoria.

FOSTORIA — It eventually turned into a memorable night for senior Levi Gazarek, who became North Baltimore’s all-time leading career scorer. But most of the good moments belonged to Hopewell-Loudon.

The Chieftains limited North Baltimore to 10 first-half points and shot 75% from the field in the second half in posting a 72-42 win in the opening round of the Division IV district tournament here Wednesday night.

A slow start ended with Hopewell-Loudon edging ahead 8-4 in the first period. The Chieftains got it going from the second quarter on, however. North Baltimore never did.

Kyle Rumschlag and Ethan Oswalt sandwiched three-point plays around 3-point goals by Travis Milligan, Jordyn Jury and Ried Jury. Then Carter Coffman turned a steal into a buzzer-beating layup as the Chieftains pushed the lead to 25-10 at the break. Meanwhile, the Tigers finished the half hitting just 4-of-22 shots with 14 turnovers.

“Tournament jitters were a little ugly in the first quarter,” Hopewell-Loudon coach Roger Jury said after his club improved to 17-6 while dropping NB out at 8-15. “I thought we had some pretty good looks, but we also settled for a couple more 3s than we maybe should have and we missed out on a couple nice drives that we didn’t finish.

“Thankfully, we played pretty good defense most of the time,” he said. “When you don’t shoot it well, if you only give up a handful of points in the first half, you’ll at least have a good chance.”

“We only average about 14 turnovers for a game,” Tiger coach Joey Hagemyer said. “We knew the press was coming and I thought we were a little better prepared for it, but sometimes, the lights are a little brighter come tournament time.”

Whatever hopes the Tigers might have had quickly went away in the third period. Rumschlag and Coffman each had a couple baskets in a 14-4 burst a little more than three minutes into the second half.

Then Jordyn Jury really went to work. He scored eight points in a three-minute span of the third period and nine more in less than three minutes of the fourth on the way to a game-high 24 points. He also had 12 rebounds and three assists.

Coffman (five rebounds) and Ried Jury each added nine points, Milligan had a couple 3-pointers in scoring eight and Rumschlag checked in with seven. The Chieftains hit 21-of-28 in the second half.

The Tigers continued to struggle.

“We just couldn’t buy a bucket,” Hagemyer said. “In the second half, I thought maybe they had the hoop with the lid on it, but that wasn’t the case. They played a great game. I thought we could do a better job on Jordyn Jury, but he had a really good night with a good supporting cast.”

Johnny Hagemyer led North Baltimore with 14 points and Gazarek added 10 with seven rebounds. His first of two foul shots with 2:35 left in the third put him ahead of his father, Marty Gazarek, on the all-time Tiger list.

“That puts him at 1,507 or 1,508 for his career, which is no easy task,” Joey Hagemyer said. “His father did it 20 years ago and it will probably be another 20 years before someone approaches it again.”

Carey was to have played Cory-Rawson in Wednesday’s second game, but it was postponed due to weather. They meet here Friday at 7 p.m. with the winner to face Hopewell-Loudon Saturday at 8:15 p.m.