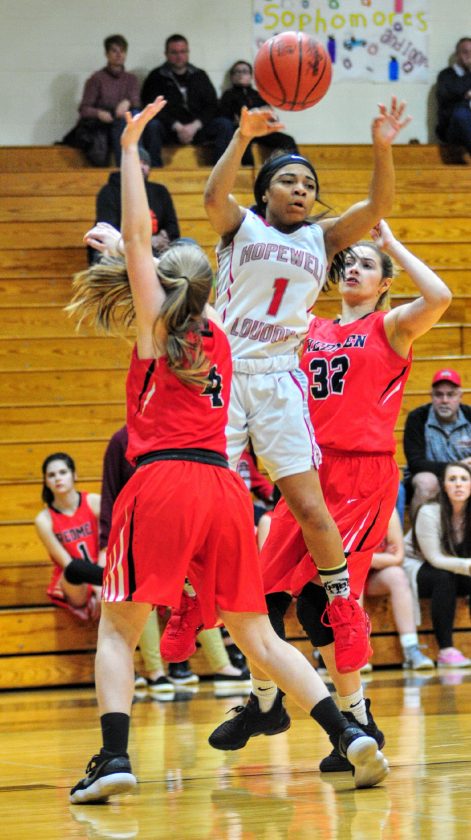 OLD FORT — It was only one shot.

But, the 3-pointer that Avarie Stewart hit in the fourth quarter felt like an injection of much-needed momentum for Carey.

The jumper started a run of seven straight points for the Blue Devils, who never trailed again.

Carey did, however, have to fend off Edison late, but held on for a 39-36 win in a Division III sectional semifinal at Old Fort High School on Wednesday.

“That was a big 3,” Carey coach Phil Vaughn said. “We needed it. In that kind of game, every point counted. It was our answer to Edison’s run in a game of runs.”

“We were not able to see Edison in person because we played so many games in the last few weeks since the tournament draw,” Vaughn said. “We watched game film and saw they liked transition. We had to get back and stop that.”

Lindsay Roberts hit a triple with 31 seconds left to bring the Chargers (11-11) within 37-36. Carey played keep away as Edison went for a steal, but Ellison Roark was ultimately fouled with 15.3 seconds left. She made both free throws and after a Carey timeout, a game-tying triple attempt by Roberts was partially blocked.

Alaina Tiell was fouled with 1.3 seconds left. After making her first nine free throws of the night, Tiell missed on both tries. Roberts grabbed the rebound and passed to Aliyah Caporini, but she did not get a shot off in time, giving Carey the win.

“We thought Edison would run something similar to the first 3-pointer,” Vaughn said. “We went under the 3 the first time and in the timeout, we talked about defending the arc. They did not have any timeouts left. In essence, we were giving up a two and we wanted to let the clock run a little bit.”

Stewart’s 3 helped start a run to give the Blue Devils a 33-30 lead with 3:02 left. The Chargers battled back and tied the game at 33 when Caporini split two free throws. Stewart came up big again for Carey when she scored off an offensive rebound with 1:01 left. After an empty possession for the Chargers, Stewart was fouled and made both free throws before Roberts’ 3-pointer.

“We wanted to take away Edison’s transition buckets,” Vaughn said. “We had to communicate better on defense.”

Early on, both teams showed signs of great play on the defensive end of the floor. Edison ran out to a 6-2 lead as a nearly four-minute scoreless stretch hurt Carey. The Blue Devils responded and led 7-6 after eight minutes.

As quickly as the run came for Carey, it went. The Chargers scored the first nine points of the quarter, holding the Blue Devils scoreless for the first 5:37 of the quarter.

Edison held a 19-15 lead at halftime, but Carey locked in defensively. Roark hit a 3 to open the scoring in the third quarter to begin a 8-0 spurt for the Blue Devils.

“That was big,” Vaughn said. “We lost Edison in transition in the first half. That was our talk at halftime. We knew Caporini really pushed the ball up the floor.”

Carey led 23-21 after three quarters and doubled that margin with two free throws by Roark early in the fourth quarter. Edison responded with a 9-1 run for a 30-26 advantage with 5:08 left.

“We felt like we defended her well,” Vaughn said. “We were throwing doubles at her just to get the ball out of her hands. The gameplan was to try to keep her in front of us. We did good enough.”

Tiell topped Carey with 12 points while Stewart added a big double-double of 11 points and 10 rebounds. The Blue Devils split two regular-season meetings with Colonel Crawford. The Eagles won, 43-35 on Dec. 6, while Carey countered with a 41-31 victory on Jan. 14.

“They are a well-coached and disciplined team,” said Vaughn of Colonel Crawford. “They know us and we know them. I would expect a good basketball game between two league teams.”

In the night’s first game, Hopewell-Loudon played without MaKayla Elmore, but made quick work of Bucyrus 66-10 to advance to Saturday’s district quarterfinal against Lakota back at Old Fort.

The Chieftains (23-0) raced out to a quick lead, scoring the first 18 points of the game behind a strong two-headed monster of junior guards Olivia Zender and Kaia Woods.

“You always like to come out fast,” Gase said. “They did a good job and stuck to the gameplan pretty well.”

Hopewell-Loudon extended the lead to 22-3 after eight minutes and to 45-8 at halftime.

With a running clock in effect for the second half, the Chieftains outscored the Redmen 13-0 in the third quarter and held Bucyrus to just two points in the second half.

“We wanted to work on some stuff defensively without MaKayla in there,” Gase said. “We have to get used to it on offense and defense without MaKayla. I thought for the most part we did OK.”

“The two-guard game showed up a little more tonight with Olivia and Kaia,” Gase said. “They do a good job working together. I would not want to play against them.”

Gase confirmed that Elmore will miss Saturday’s game against Lakota (5-17), who H-L beat 82-39 and 95-36 in the regular season. All signs point to a season-ending knee injury for the 6-foot-3 all-Ohioan post.

“Lakota is fairly quick and they do a lot of nice things,” Gase said. “We have to be better prepared for them than we did for Bucyrus.”