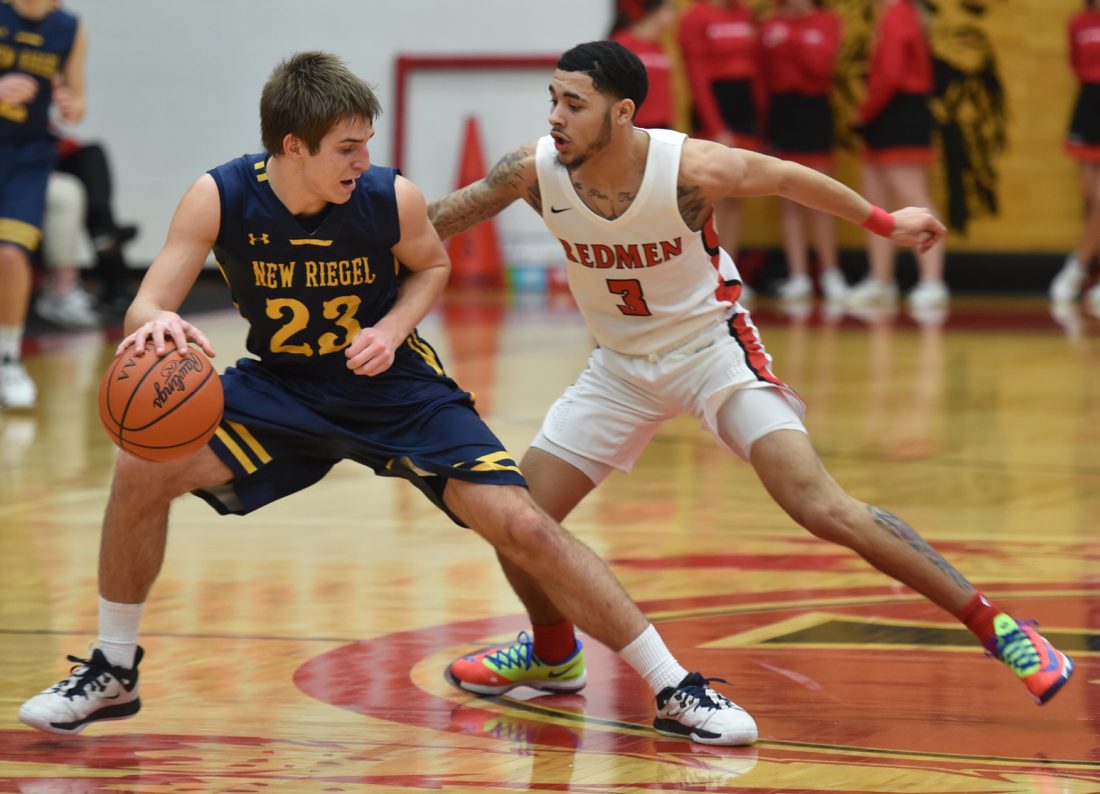 PHOTO BY MICHAEL BURWELL New Riegel’s Nick Reinhart (23) brings the ball up the court against Fostoria’s Avondre Reed during Tuesday’s game at Fostoria.

FOSTORIA — Fostoria boys basketball coach Thom Loomis knew New Riegel was going to give its best effort as the little school vs. the big school.

He warned his players of that each of the three days prior.

Sure enough, the Blue Jackets rolled into Fostoria and caught fire in the second half to stun the Redmen 74-61 on their home court in a non-league clash Tuesday.

“I told (my) guys ‘I coached at Bettsville,'” said Loomis of the now closed school which merged with Old Fort in 2014. “Very similar situation. Whenever you’re going up against a Fostoria, it’s a badge that you want real bad to pin your chest and wear for the rest of your career.

“Credit to (New Riegel). They came with it and never backed down, shot lights out and we just weren’t functioning as a unit.”

New Riegel erupted for 11 3-pointers in 17 attempts in its season-high in point production to improve to 8-13.

“We played really well, we shot the ball really well and their crowd was into it tonight,” New Riegel coach Dave Losey said. “There were times where we couldn’t hear each other. It’s a nice test for tournament.”

The Blue Jackets got a game-high 22 point effort from 5-foot-8 sophomore Joe Tiell — the seventh and final man in their rotation.

Tiell entered at just under 5.0 points per game (4.8). His effort on Tuesday included three 3-pointers, five rebounds and two steals.

“Joe is extremely streaky; when he gets on, he really shoots the ball well,” Losey said.

The action started out relatively low-scoring and even-paced as Fostoria took a slim 29-28 edge into halftime. Tiell scored his first seven points in a 9-2 run to help his team close the final two minutes strong.

In the second half, New Riegel carried over its effort to make Fostoria defend multiple passes through and for lengths at a time.

The Blue Jackets did take the open shots when they got them, and hardly missed.

Leading just 42-40 late in the third, Tiell pulled up and drained his second 3-pointer of the frame. Two possessions later, Nick Reinhart buried a triple, assisted by Gillig, and the Blue Jackets eventually ended the frame on an 11-0 run.

“We moved the ball pretty well offensively; we were able to spread the floor,” Losey said.

Fostoria got by in the first half on knocking down jumpers — largely from the release of Avondre Reed, who had 10 of his team-high 20 points that way in the second quarter.

The Redmen didn’t match the Blue Jackets’ patience or shooting prowess in the third quarter.

Fostoria often settled for a quick outside shot with little success, hitting 4 of 14 overall in the third and 1 of 7 from 3-point range. Three of its makes came via fastbreak layups.

“Total impatience on offense. We had none in the third quarter, absolutely none,” Loomis said. “We ran no sets. When it was 5-on-5, we executed nothing. It was five guys going out there and not playing together.

“It was very similar at the other end. We didn’t match up with shooters.”

Tiell’s scoring continued into the fourth frame for New Riegel’s first nine points. Even when he missed, he was twice fouled on a 3-point try — sinking 4 of 6 in both trips.

The Redmen came as close as 62-55 nearing the two-minute mark but the Blue Jackets made 8 of 11 at the foul line the rest of the way.

“(We) didn’t show any fear except for that little point in the second quarter,” Losey said. “We got down (25-16), were able to settle down and get aggressive again.

Dom Settles had 17 points for the Redmen while Reed also notched four rebounds and four steals.