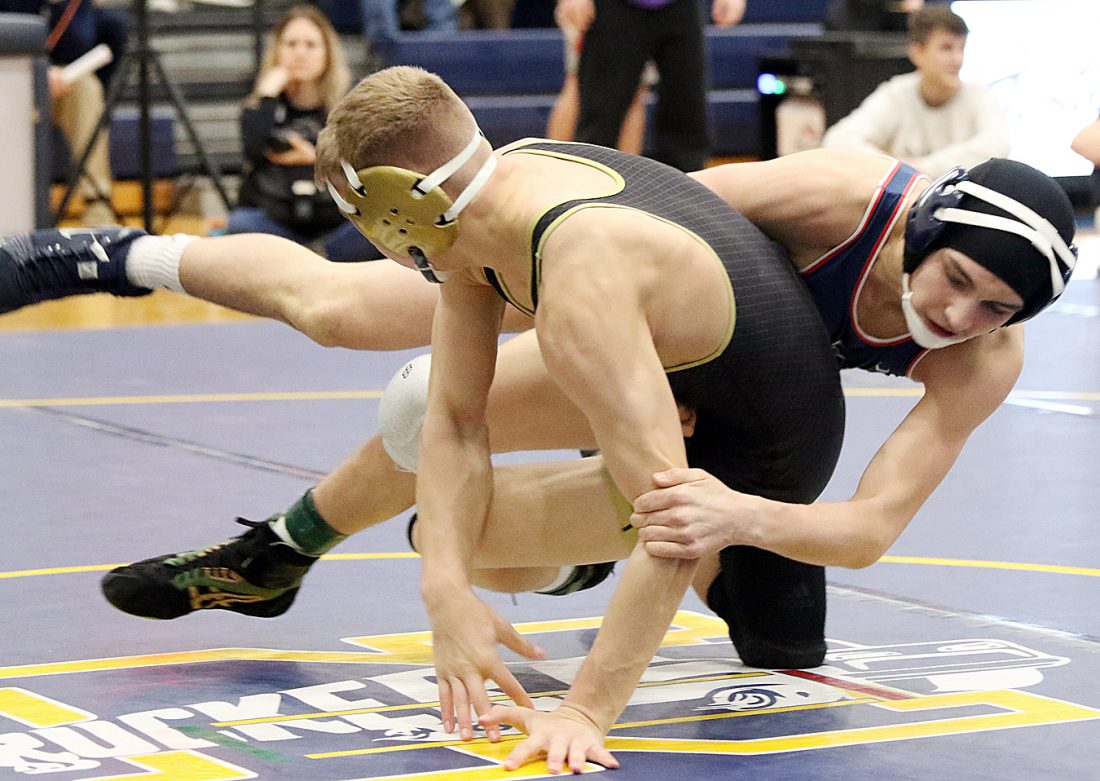 Despite finishing second to Sandusky Perkins 174-164 1/2, Adkins thought his team performed well at the SBC Tournament on Saturday. While he’d prefer to celebrate a conference title, Adkins is proud that every Bellevue wrestler made the podium pictures.

“We placed everyone we brought, so you can’t argue with that,” Adkins said.

Justin Mayes highlighted Bellevue’s afternoon with a first-place finish at 182 pounds. His championship match against Oak Harbor’s Wyatt Miller went to ultimate tiebreaker at 2-2. And in the final 30-second period, Mayes kept Miller in the referee’s position just long enough to claim the title.

“I knew that was gonna be a tough one,” Adkins said. “They both respect each other so much that they almost don’t want to do anything. Luckily, we didn’t have any stalling calls. It worked out.”

Now the Redmen turn their attention toward the sectional tournament. And coach Adkins can’t think of a better tuneup than the competition his team faced on Saturday.

“The SBC is just unbelievable,” Adkins said. “You’ve got weights where multiple guys are ranked high in the state. It’s very tough. It’s definitely good preparation for next week’s sectionals.”

Despite finishing fifth in the Lake Division team standings with 124 points, Columbian claimed more individual SBC titles (three) than any other team at Saturday’s SBC Tournament.

“It’s great to see him back here,” Columbian coach Travis Salyer said. “He deserves it. All these guys do.”

Freshman Maddox Simcoe won the next Columbian title at 132 pounds. The four-seed pinned top-seeded Jakey Neer of Edison in 1:59 during the semifinals before beating second-seed Caden Crawford of Hopewell-Loudon 8-6 for the title.

Simcoe lost to both Near and Crawford earlier this season.

“He got some payback here,” Salyer said of Simcoe. “He beat two guys he had lost to earlier. That’s not easy.”

Despite its three champions, Columbian’s team score suffered due to some late scratches from its lineup. The Tornadoes struggled with illness at 182 and 195 pounds leading into the tournament.

“I’m pretty happy with the dudes heading into sectionals,” Salyer said. “Last year, we had three finalists and two champs. This year four finalists and three champs. Pretty good day for being down a few guys.”

Lakota’s Trevor Franks won the 160-pound championship and was named the River Division’s most outstanding wrestler. His title win against Gibsonburg’s Jonathon Auld came via default.

Along with Caden Crawford’s second, Hopewell-Loudon got a sixth from Lance Crawford (138), a seventh from Nicardo Garcia (152) and an eighth from Blake Hoover (126).