Another victory, another league title for Old Fort 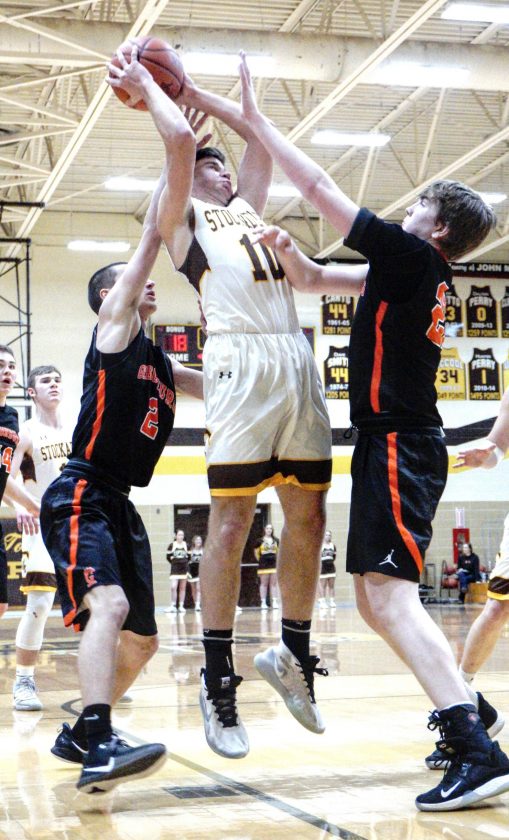 Well, maybe there was a little fuss. But there is no disputing the championship.

The Stockaders limited Gibsonburg to a single basket in the third quarter and just eight total points in the second half in rolling to a 73-33 win here Tuesday night.

In doing so, Old Fort ran its record to 18-1 overall and its 14-0 mark in River Division play sealed an outright championship. The Stockaders have won or shared the title each of the last four seasons.

“We’re pretty happy about that,” coach Eric Hoover said. “That was one of our goals at the beginning of the year. I think we still have more goals in front of us and we’re going to keep working to reach those as well.”

Although the Stockaders never trailed from the moment sophomore Colin Nutter opened the game’s scoring with a jumper in the lane, Gibsonburg (7-11, 6-8) hung with them through the four-minute mark of the second period.

While Old Fort relied heavily on an inside game — Carson Steyer scored all 21 of his points in the first half, mostly on a series of post moves, and the 6-foot-6 Nutter added 11 of his 15 total points early — Gibsonburg rode the three-point shooting of Aidan McGough and Tyler Henderson in keeping things close.

McGough had a couple long balls and Henderson one early into the second period. And when Theo Hernandez drove the baseline for a score and Mitchell Tille added a layup, the Golden Bears were within 21-17 with 4:08 left in the half.

The Stockaders gained some separation as Steyer scored 11 and Nutter five over the final four minutes of the half in pushing the margin to 37-25.

“Their two best shooters made four 3s (total). I wasn’t too thrilled with that,” Hoover said. “It was the way they scored, really. Theo beat us for a layup — we didn’t have any help there. We didn’t get that done and we had a mix-up communication-wise. It was the way they were scoring that I wasn’t happy about.

Nutter and Hernandez traded baskets in the first minute of the third period and then Old Fort went on a 16-0 run to close the quarter. Zach Dewese scored all seven of his points in the quarter to go with five total assists and the Stockaders were on the run.

Old Fort ran the lead to 58-27 before the Bears scored again and the issue was more than settled.

As for the rebounding, Old Fort dominated the boards throughout. It had a 19-8 edge at halftime and a 41-15 margin for the game. Nutter had nine rebounds and a couple blocks and Garrett Havens picked up eight rebounds.

“We’ve had trouble sticking to the scouting report all year and that’s on me,” Gibsonburg coach Brent Liskai said. “All credit to Old Fort. They’re one of the best teams in the area.

“We missed a lot of boxouts,” he said. “They had 12 offensive rebounds, I believe, at halftime. You’re not going to win games if (the opponent is) doing that.”

Hernandez and McGough each had nine points to pace Gibsonburg. Meanwhile, Old Fort had 10 players score while hitting 26 of 44 from the field. Even more impressive, the Stockaders were 22 for 32 on 2-point attempts.

“I’m proud of our kids,” Hoover said. “It’s been a tough league this year with lots of very good teams and for us to be where we’re at right now is impressive.

“It took all 11 guys to get that done,” he said. “We’ve had, as everybody does, a lot of injury problems, sickness and everything else, but our depth really helped us fight through that.”