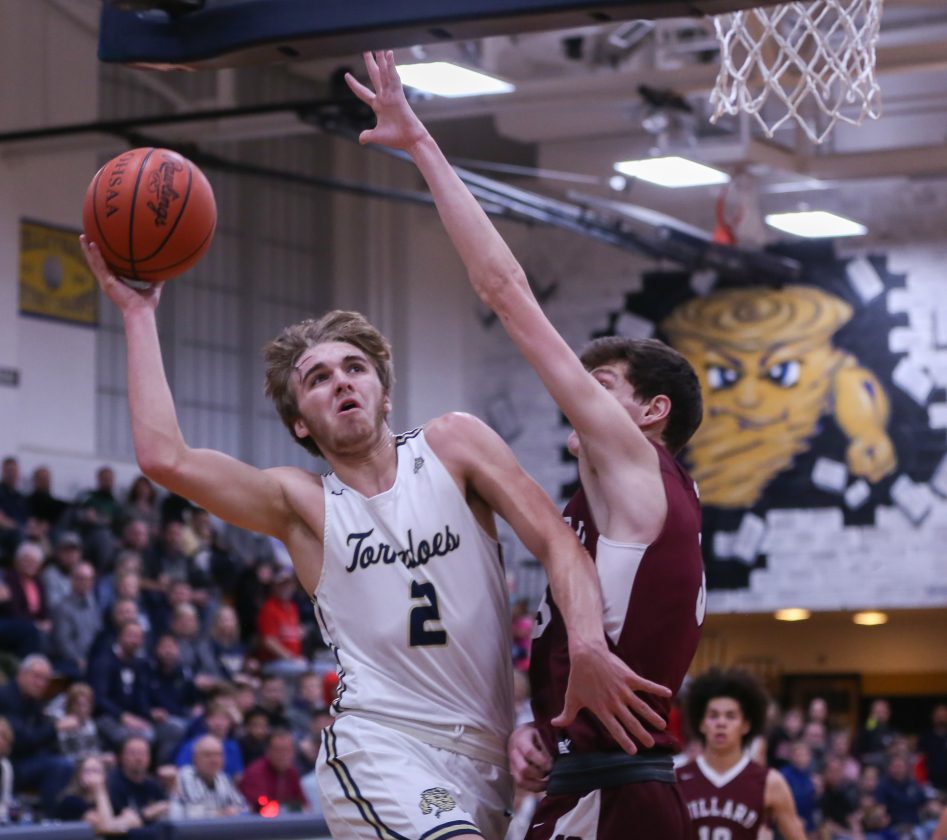 PHOTO BY STEVE WILLIAMS Columbian’s Carson Goble shields off the defense of Willard’s Terry Baldridge for a layup Saturday in Tiffin.

It wasn’t Columbian’s best night of perimeter shooting, but that was only half of a double-whammy for the Tornadoes. The other half was what Willard did at the other end.

The Crimson Flashes had the get-out-and-go offense running in top form in racing to an 85-64 non-league win at Columbian Saturday night.

Willard, which lost for the first time Friday night at Margaretta, came back with a vengeance while improving to 10-1. Columbian, with two tough losses of its own coming in, now stands at 6-5,

“It’s been a long 24 hours,” Willard coach Joe Bedingfield said regarding the 63-61 Sandusky Bay Conference Bay Division overtime loss to the Polar Bears. “That’s the nice thing about basketball. You don’t always have to wait a week to bounce back.

“The kids were ready tonight,” he said. “I thought the focus was a lot better from start to finish and that was good to see.”

The Tornadoes started well enough as Chase Frankhauser drove for a three-point play and Bryce Burns hit a couple buckets off Logan Beaston passes, one of them a 3-pointer, for an 8-2 lead with 4:26 still to go in the first period.

But the Flashes had a 9-2 answer with standout Cooper Parrott scoring five of the points. It was give and take from there with Parrott’s two foul shots to close the period giving Willard a 17-14 edge.

Parrott hit a couple quick 3-pointers in an early second-quarter spurt for a 27-18 lead. He added three more baskets in a little more than a minute as the Willard transition game was at full speed in pushing the margin to 40-23. That was one of several bursts on the way to a monster night of 33 points and seven rebounds for Parrott.

A pair of Burns 3-pointers in the final minute of the half allowed the Tornadoes to stay in range at 42-29. That bit of success was deceiving, however. Columbian went 4 for 14 from 3-point range in the first half and was 5 for 23 for the game.

“I was really pleased with the way our guys came out and started the game,” Columbian coach Travis Kinn said. “That’s been a problem of ours.

“Our full-court trap was good early, but Parrott got lost a few times and hit a few 3s on us,” he said, “That’s on me for not getting us out of that trap sooner.”

The Tornadoes needed a quick start in the third period, but it went the other way instead. Terry Baldridge Jr. scored eight, including a couple transition dunks and the Flashes had four assists in a 12-2 run that pushed the lead to 54-31 with 3:18 to go in the third period.

It was too much of an uphill battle for Columbian from there although the Tornadoes twice moved to within 14 points in the fourth period.

“Their length creates a lot of transition opportunities for them,” Kinn said. “They take away passing lanes that maybe are normally there against most teams. And with that length, they rebound so well, leak out and it’s very easy for them to score quickly. That’s something we knew they would do, but a better shooting night helps negate some of that transition.”

Bedingfield was in agreement.

“We wanted to use our length to our advantage, try to make them shoot over our length the best we could,” he said. “We just wanted to contest shots, rebound and get out in transition. I thought our half-court defense was pretty good and we did a good job of rebounding as a team and going with it.”

The 6-foot-8 Baldridge Jr. backed Parrott with 20 points and nine rebounds for the Flashes, who out-rebounded Columbian 37-27. Myles Pinkston checked in with 13 points. Willard shot 60 percent from the field, hitting 30 of 50.

Burns tossed in 24 points, including four 3-pointers, and LJ Reaves added 17 points with six rebounds for the Tornadoes. But from there, the scoring dropped to six points each by Cyrus Burden and Cole Zimmerman.

“We’re very confident in our kids being able to share the scoring load,” Kinn said. “LJ’s had a couple nice games recently and Bryce shot the ball well early. Really, we have a lot of guys who can put the ball in the hole, but it’s a matter of being efficient with our shots.

“I felt the way our guys competed throughout the game tonight was very, very telling of the type of guys they are,” he said. “They are incredibly competitive, incredibly spirited and that’s going to bring us closer and make us better.”