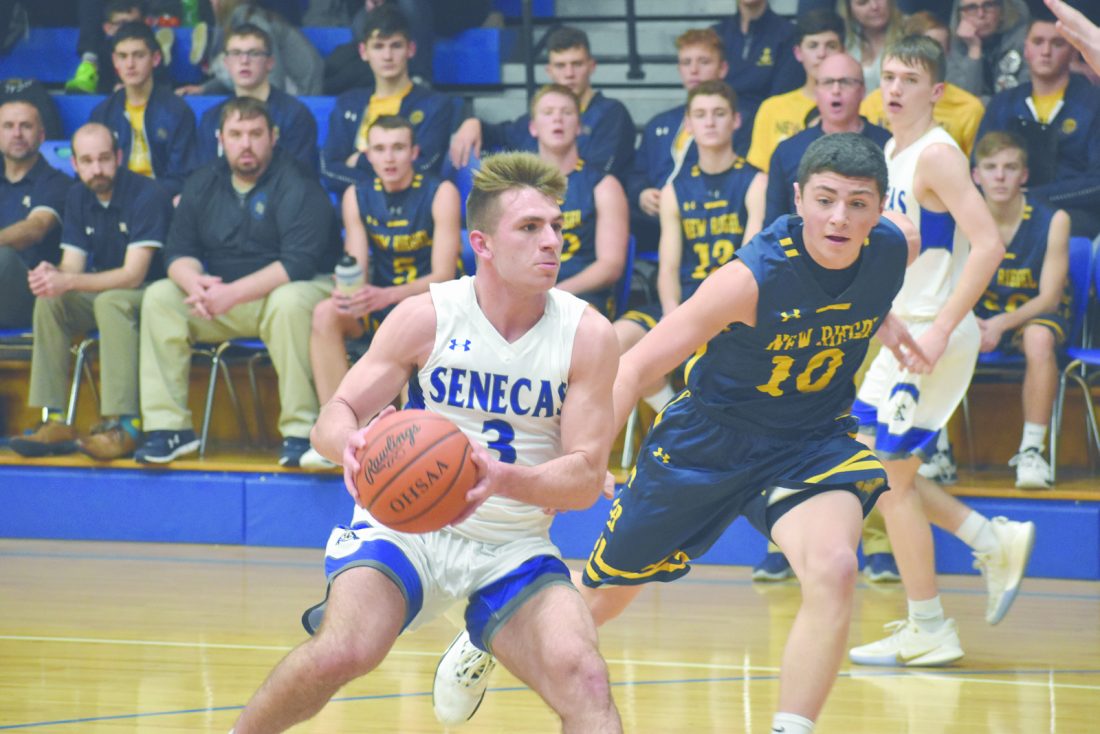 PHOTO BY ZACH BAKER Calvert’s Mitch Nielsen (left) picks up his dribble while being pursued by New Riegel defender Logan Schalk during the first quarter Tuesday in Tiffin.

Calvert’s been on a run that might suggest the best of opportunities are turning its way. The opposite has never seemed more clear for New Riegel.

And there was never better evidence of either than the Senecas’ 37-36 home win over the Blue Jackets Tuesday night.

“They completely outplayed us,” Calvert coach Jon Otterbacher said after his club escaped with its ninth win against two losses, improving to 6-2 in Sandusky Bay Conference River Division play in the process.

“They out-hustled us, out-physicaled us and out-schemed us,” he said. “We did not do anything right except come out with a one-point win.”

That might not have been true on a start-to-finish basis, but the fourth-quarter play backed the notion.

The Senecas, who twice led by eight points early and seven points twice more in the second half, took a 28-21 lead with 5:08 to go in the third period on a Jack Shultz layup. They managed just five points — a three-point play by Garrett Spaun and a Shultz jumper over the next 11-plus minutes.

Down 33-26 early in the fourth, New Riegel (2-9, 2-6) ran off 10 straight points beginning with a pair of buckets from Hayden Hohman, one by Joe Tiell and Christopher Acree’s (11 points) third 3-pointer of the night.

Nick Reinhart hit the front end of a one-and-one for a 36-33 lead with 53 seconds to play before everything suddenly turned against the Blue Jackets.

Calvert moved quickly off the back end miss and Nolan Beeker got an inside hoop off a pass from Nick Seifert with 44 seconds to play.

The Blue Jackets had two more chances at the line but first Hohman, with 29 seconds left, and then Logan Schalk, with 16.8 seconds left, were unable to get the first shot of bonus tries to fall.

The Senecas quickly advanced and with seven seconds left, Spaun was able to draw a foul from Reinhart on a 3-point try. Spaun, who led Calvert with 15 points, went to the line and hit the first two shots to provide the winning margin.

The Jackets moved quickly off Spaun’s third-shot miss and got the ball to Reinhart, but he was unable to get the shot to go over tight defense from Seifert.

“We had three fouls to give,” New Riegel coach David Losey said after his team’s seventh loss of nine points or less. “We called timeout (before Schalk’s free throw) with 16.8 seconds and discussed giving those fouls coming up the floor to shorten the game a bit.

“Unfortunately, we didn’t execute coming up the floor and I’m not sure what happened there on the 3(-point attempt by Spaun),” he said. “Obviously, we were over-aggressive. But I thought it was a great shot for us, a tough shot. He was coming off the bounce on a pullup with a hand in his face, I liked our odds, but …”

As he noted repeatedly in postgame, Otterbacher said things just worked right for his team on the play.

“We just drew it up the fly to get either Garrett a shot or a flare screen off the back side for Seifert,” Otterbacher said. “Luckily, Seifert was a little slow getting to his spot, so Garrett kept the ball. Reinhart contested the shot just a little too hard and Garrett made two shots for the win.”

Beeker had eight points and Seifert added six points with eight rebounds for Calvert, which has now won six straight.

New Riegel, in the midst of a tough-luck season throughout, was a prime candidate for just such an occurrence.

“This one might be the toughest,” Losey said. “You never have a win nailed down unless it’s 20 points with nothing to go but this one, it’s tough.

“We handled the ball well (for the final shot),” he said. “We got it up the floor and got a good look. Earlier in the year, we would have turned it over in the backcourt, maybe because we were scared. We weren’t scared. We’re showing growth.

“We just have to find a way to get over the top.”