Rams stay perfect in N10 after routing rival Warriors by 32 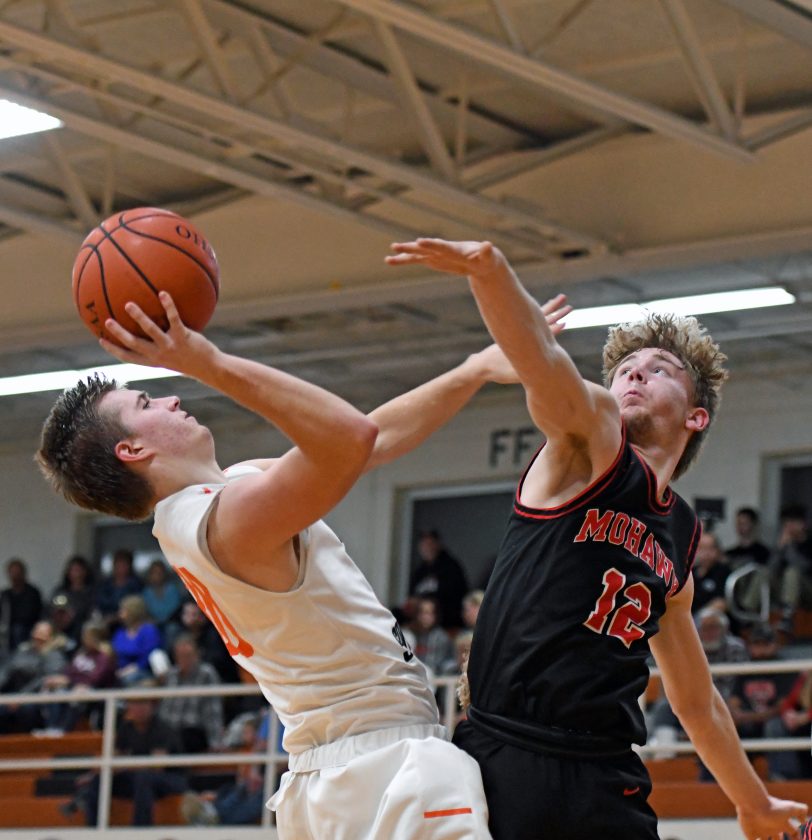 PHOTO BY KENT TARBOX Upper Sandusky’s Evan Young (30) falls back as he puts up a shot over the defense of Mohawk’s Brock Brause (12) Thursday night at Upper Sandusky.

If the hometown Rams continue to play with the efficiency they had in dumping Mohawk 73-41 Thursday night, the league championship banner could be headed their way — again.

Upper Sandusky had everything working its way in this one — shooting, rebounding and defense in improving to 10-1 overall. At 6-0 in N-10 play, the Rams are the lone unbeaten. They had a three-year run of championships before the Warrior title last year.

McCreary, who was honored before the game for having topped 1,000 career points during a string for four road games leading to Thursday, passed to Evan Young for a jumper, then scored twice himself off a steal and then a feed from Mason Vent. Vent finished the burst with a jumper.

McCreary, Vent and Young all hit 3-pointers in a 13-2 spurt over the first three minutes of the second period to turn a four-point lead into a 30-15 advantage.

Vent had 13 of his game-high 21 points by the half, which ended with the Rams leading 38-24. Young added 19, including a couple 3-pointers less than a minute into the second half as the Rams pulled away.

“They’re a real scrappy bunch. They get after it,” Upper Sandusky coach Jeff Winslow said of Mohawk’s early challenge. “They’re hard-nosed, tough kids who stayed with us for a little bit, but we weathered the storm and just kept playing.

“Defensively, what can you say? Forty-one points, is that what it was? That’s just a really nice game,” he said. “(Mohawk had just) 17 points in the second half. That allowed us to get out on the break and score some easy ones.”

They all seemed easy on this night. Upper Sandusky hit 30 of 53 overall, including 9 of 17 from 3-point range.

“We’re doing a good job of going inside out,” Winslow said of an offense that seemed especially smooth. “Early on against zones, we were just flinging it all over the place. When you get it inside and kick it back out, make the extra pass, those 3s are a lot easier to make.”

Vent had 10 rebounds in leading the Rams to a 42-26 dominance of the boards. Gavin Carey had eight rebounds to go with nine points.

The five Ram starters average 6-foot-2 and Winslow can substitute a couple 6-foot-5 guys in Carey and sophomore Trent Beamer. The Warriors were further disadvantaged after having lost 6-foot-2 Hunter Gottfried to injury against Seneca East over the weekend.

“We’re trying to find guys to step into different roles with one of our guys down,” Dunn said. “There’s a little bit of growing pains right now. I think we have more talent that we showed on the floor tonight. We’ve just got to get them playing at the level they’re capable.”