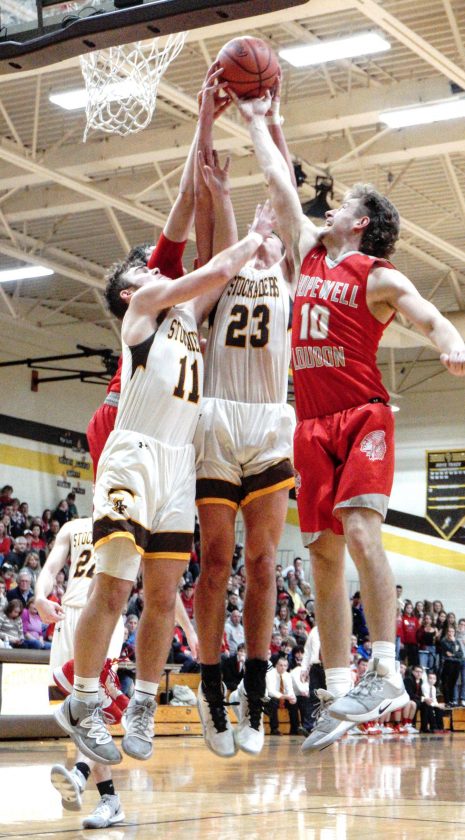 PHOTO BY PAT GAIETTO Old Fort's Jordan Smith (left) and Colin Nutter try to get a rebound from Hopewell-Loudon's Carter Coffman (back) and Travis Milligan Friday in Old Fort.

The Stockaders, who are still without an injured Garrett Havens, found themselves in a tussle with Hopewell-Loudon. A lot of it went against them as the Stockaders battled foul trouble all game, including putting the Chieftains into the bonus with 2:21 left in the third quarter.

Considering all of that, Old Fort still rallied to get an important 65-60 Sandusky Bay Conference River Division victory.

“That was a huge game for us, it’s still the first half (of the league schedule), but it was huge to get a win. You have to win that game at home no matter what,” Old Fort coach Eric Hoover said. “We went through a lot of adversity in the game with a ton of foul trouble in both halves and luckily I have a lot of good players I can put in the game.

“Myles (Miller) played a ton of good minutes in the first half and he did an outstanding job offensively and defensively and made a lot of plays for us. You don’t lose near as much when you have guys like that coming off the bench. Jordan (Smith) gave great minutes off the bench like he has all year. Everybody I put on the floor did good things for us. You have to battle through everything and to be a man down, which we were, just grateful to come away with a win tonight.”

The Chieftains continued their good play at the beginning of the second period, leading 22-16 after a Carter Coffman triple and a layup from Ethan Oswalt.

Old Fort responded with a 13-2 run. Zach Dewese had nine of his game-high 21 points within the run to stretch Old Fort’s lead to 29-24.

The Stockaders upped the lead to 37-27 after Gregory Steyer’s second trey of the quarter with 50 seconds left in the half.

Coffman pulled the Chieftains within 37-30 at the break after a pair of free throws with nine seconds left.

Old Fort’s lead was steady around 10 points for a lot of the third quarter until Dewese hit a big triple to give the Stockaders a 50-38 advantage. Since H-L was in the bonus for the last 10 minutes of the game, it was never out of it. Kyle Rumschlag got H-L within 52-46 entering the fourth after a buzzer-beating 3.

“We thought in the foul situation I thought we drove it well and got to the rim pretty well. I thought we didn’t get to the line as much as we would’ve wanted to,” H-L coach Roger Jury said. “The other thing was we made a lot of hustle plays. A lot of those go our way it comes down to a couple possessions there at the end.

“Of course they are a really good team and we think we’re a pretty good team and on the road it’s hard to win. If the ball bounces your way a couple times, whatever cliché you want use … we were right there. The kids gave effort and that’s all you really could ask for. I know they played pretty much as hard as they could. I thought we played well enough to get there. We’ll look at the film and go from there.”

H-L got within 61-57 with 2:27 left after a pair of Marshall Reinhard buckets, but a stickback from Smith at the other end halted H-L’s momentum.

“The kids put themselves in a good position tonight, but we have to go back and watch the film,” Jury said. “This league’s really good. We have to be ready to play on Tuesday and there is still a bunch of stuff we can achieve this year in front of us, so hopefully some of those things happen that way.”

“We know we can play better. I tell them all the time I can’t wait for us to play a good game. We have quarters here and there that are really good, we just have to get rid of those lapses. I’m seeing personal improvements from everyone and I thought we had a great week of practice. They are playing really hard.

“We didn’t talk about it being Hopewell, they knew and they had a great week of practice, but they have to do that every week and we’ll keep improving.”