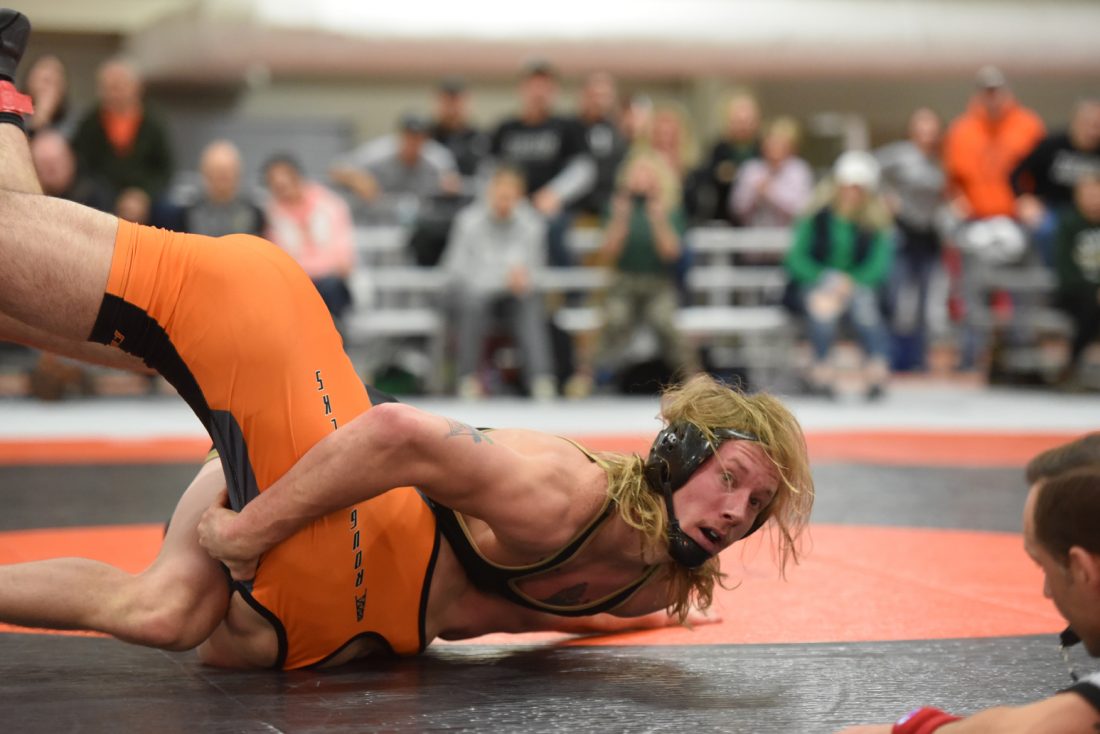 FINDLAY — With the stakes raised to the max, top-seeded and No. 8 nationally-ranked Tiffin came back in the final match of the Great Midwest Athletic Conference Wrestling Championship duals Saturday afternoon.

With his team trailing 19-18 against defending conference duals champion Lake Erie, heavyweight David Henson surged in front of his crowd’s rallying cries to beat Devin Uzelac 5-1 and score a huge 21-19 team win for the Dragons.

It was redemption for Henson, who was put in a carbon copy of the same situation at last year’s inaugural championship duals event that Tiffin hosted. Match momentum shifted from the lightweights to the middle weights and teams exchanged blows up in the upper weights before it all came down to the heavyweight bout.

Tiffin went a perfect 5-0 as all six Great Midwest teams wrestled each other over two days in Findlay’s Malcolm Athletic Center.

Lake Erie gave Tiffin all it could handle, winning the first four weight classes to grab the early advantage.

Three of those four victories included bonus points as Jacob Johnson (125), Blake Glogouski (133) and Brandon Tenney (149), all came through with major decisions.

Tiffin’s big guns came out and scored critical points starting at 157 pounds as senior Trey Grine was able to eventually turn John Siemasz in 2:52 for the Dragons’ first win.

Bryan LaVearn made the score 15-9 with his 7-3 decision at 165 and Hayden Bronne pinned yet another opponent in 4:34 to tie the match at 16-16. Richard Screptock made it four straight victories for the Dragons with bonus points from his 13-0 major decision at 184.

But NWCA/Intermat nationally-ranked Chris Droege delivered in a big way for the Storm at 197 and countered with bonus points of his own with an 11-3 major decision against Nicholas Smythe.

That set the stage for Henson against Uzelac.

The 30-point win over the Oilers was the biggest win over Findlay in school history, with TU winning all but two weight classes. Rico Puente (133) outpointed his opponent 8-4 while Hunter Langeloh (149) also got TU big points with a pin in 2:12.

Three straight pins followed, with Grine winning in 4:53, LaVearn winning in 3:14, and Bronne getting another pin victory in 2:12. Screptock added a tech fall victory 17-1, while Smythe came up big with a narrow 3-2 win and Henson also squeaked out a 2-1 victory.

In TU’s win over Alderson-Broaddus, the Dragons again won all but two bouts. LaVearn and Dylan Mansor (141) picked up forfeit wins, while Puente got a pin victory in 2:11. Langeloh (1:59), Bronne (0:52), and Henson (1:26) picked up dominating pin victories, while Grine picked up a big 19-5 major decision. Smythe also picked up a 6-0 victory.

Day 1 was even easier for the Dragons. They blasted Ohio Valley 54-6 and Kentucky Wesleyan 50-0, taking advantage of nine forfeit wins spread out over both matches, including six against Ohio Valley.

Tiffin continued the dominance against the Panthers, shutting them out and allowing a total of just eight points over 10 matches.

Stubblefield won the day’s closest match to open things up 3-2, followed by Puente’s major decision 14-4 at 133 pounds. Mansor and Grine both won by big tech fall scores of 16-0, while Langeloh got a pin in just 58 seconds.

Bronne topped that mark with a pin in just 36 ticks, while Henson also got a 8-2 victory at heavyweight. LaVearn, Screptock and Smythe got forfeit wins.