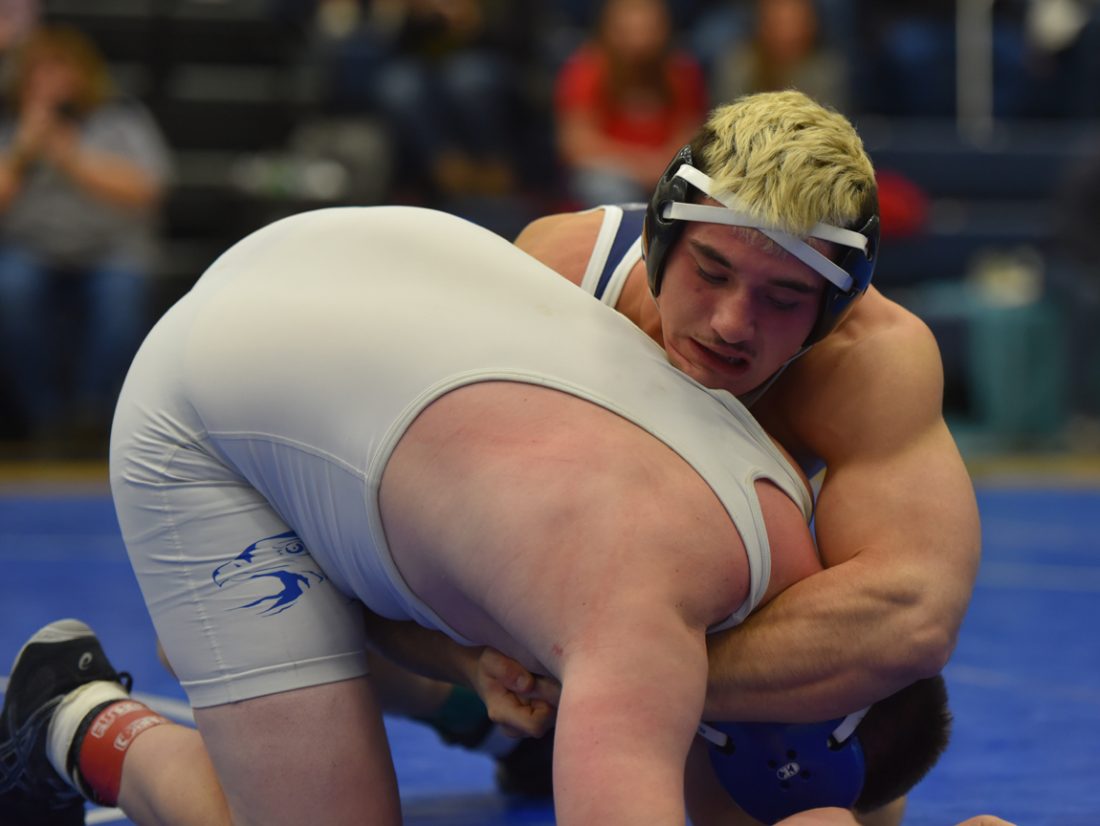 PHOTO BY MICHAEL BURWELL Carey’s Tanner May (right) looks to keep his hold against Riverdale’s Ethan Shane during their 182-pound first-place match at Saturday’s Carey Classic at Carey High School.

CAREY — It’s no secret that the strength of Tanner May’s game is, well, his strength.

But the Carey senior knows that if he wants to achieve his ultimate goal of winning a state title this season, it’s going to take strength in more ways than one.

“In the offseason, my goal was just to get bigger and stronger like always because ever since my freshman year, I got a pretty good build going so just keep getting stronger in the offseason and during wrestling season, just keep getting in better shape every week,” May said. “Better conditioning, better muscle conditioning, better cardio, everything.

May, the Blue Devils’ chiseled 182-pounder, three-time top-six finisher in the state tournament and, as of Jan. 8, the school’s all-time career wins leader, has been dominant on the mat so far this season.

May has gone 20-1 with 14 pins to improve to 151-23 overall. He is coming off his fourth consecutive Carey Classic title in which he recorded three pins in a minute or less and four pins overall in four matches en route to being named the most valuable wrestler.

“The last couple years, he’s just been very dominant in the sport,” Carey wrestling coach Ryan Pratt said after Saturday’s Carey Classic. “This was his fourth Carey Classic title today, he won all four years and not a lot of people can say that.”

As a freshman in 2017, May finished sixth at 182 pounds in the Division III state tournament and followed that up with a fifth-place showing at 170 pounds at state the following year.

Last season, he reached the 182-pound state title match, but dropped a 5-2 decision to Bluffton’s DeAndre Nassar to finish with a 47-3 record and a runner-up finish.

That match has fueled May, who learned a lot from taking on another powerful wrestler.

“What I took from that match is always stay in a good position and the better person with conditioning usually comes out on top,” May said. “My conditioning, it always comes around during state time but last year, as far as conditioning, his was just a little bit better than mine. That’s how he got me.”

May’s senior year so far has been strong.

May’s lone loss was a slim 3-2 decision to Oak Harbor’s Wyatt Miller in the Bellevue Bob Bailey Invitational on Dec. 14. Miller was named the tournament’s most valuable wrestler.

May went 5-0 at the Trojan Duals at Findlay High School on Dec. 7, and on Jan. 4, he earned MVW honors in winning the 182-pound title at the Pioneer Classic Memorial at Olentangy Orange High School.

May won two matches by forfeit in a tri-match against McComb and Patrick Henry on Jan. 8 to reach 147 career wins and surpass 2017 Carey grad Jevyn Pratt as the school’s all-time wins leader.

It was a bittersweet, but exciting moment for Ryan Pratt, Jevyn’s father.

“Honestly, records are made to be broken. You always hear that. Unfortunately, it happened to be my son’s,” Ryan Pratt said with a laugh. “But Tanner, since day one, we knew he was something special coming in as a freshman and he’s done nothing but prove to us all that he’s the real deal.

“I can’t say enough about the kid. His work ethic is unreal, he lifts on his own, works out, he’s one of the hardest workers in practice and he’s always up for the challenge. He’s not afraid to roll with us coaches and we do whatever we can to give him different looks and everything. He’s got a good head on his shoulders.”

The biggest improvement that Pratt has seen over the years is May becoming an all-around wrestler.

“He can move from the bottom now; he’s not afraid to pick down. He can ride from the top a little bit now, he’s amazing on his feet,” Pratt said. “So he’s a well-rounded wrestler now and his work ethic, you can see it on the mat everything that he’s done. All his training comes out when he’s on the mat.

“I just love the fact that he’s humble with the way he is. He never thinks he’s better than anybody else. You would take 14 Tanner Mays and not just his physicalness; just the kid he is. He’s an all-around good kid. He’s somebody you want on your team.”

May and his teammates will be tested this weekend as the Blue Devils will compete in the 42nd Van Buren Invitational at Van Buren High School. The 29-team, two-day tournament begins today.

May said he feels confident with where he is at this point in the season. There’s still a ways to go before the OHSAA individual tournament begins in late February, but May is all-in on reaching his goal of winning a state title.

“I feel like obviously, my senior year, I’m just going to give everything I have this year,” May said. “No matter where I’m at, who I’m wrestling, just give everything I got and we’ll just see what the outcome is.”