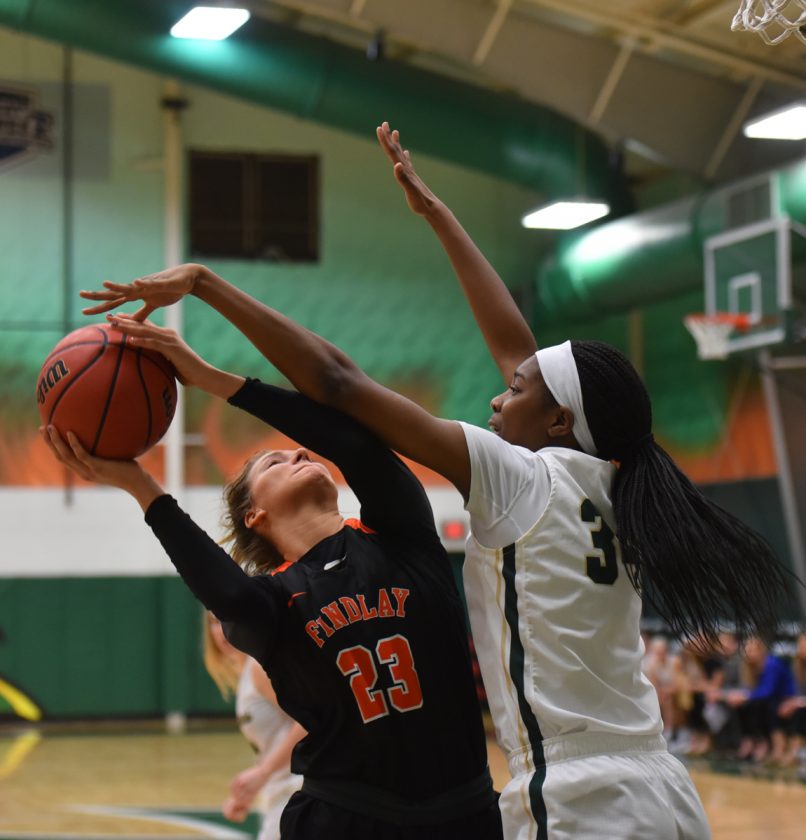 Sydney Kin didn’t let the pressure of missing a clutch free throw get to her.

She had one more to go, only needing one with 0.4 seconds remaining.

The 6-foot-3 sophomore forward regrouped and rattled in the second to give the University of Findlay women’s basketball team a 67-66 Great Midwest Athletic Conference victory over Tiffin University on Saturday at the Gillmor Center.

“I was really nervous, especially when the first one hit the back of the rim,” Kin said. “It was very intimidating and the crowd was wild.

Kin racked up 23 points and seven rebounds. The Carey grad dominated inside, finishing 8 of 13 from the field and 7 of 11 from the foul line.

“They’ve been doing that all year,” Tiffin coach Jessie Ivey said of her team fighting back. “We’re just one or two possessions away from getting these Ws and we’ll get back to work and see what we can do to make it happen.”

Holding for the last shot, UF point guard Amber Schweiger drove to the rim in the waning seconds and missed her shot poorly off glass, but Kin corralled the rebound in a sea of four Dragon defenders.

Kin missed the putback but got the board again and got fouled from behind, all in a matter of two seconds.

“I knew my role and I have to go rebound,” Kin said.

Kin, the reigning GMAC player of the week, has also been thriving at the foul line lately, making 32 of 37 attempts in her last six games.

UF coach Jim Wiedie said her clutch make went back to all their work at the line in practice.

“Obviously there’s not X number of fans yelling and screaming but repercussions,” Wiedie said. “That repetition over and over again, those kids are more confident in their abilities when they’re in that situation to knock it down — Syd is no exception.”

Nichols totaled 19 points and 10 rebounds for her fourth double-double of the season and third straight. She also had five assists.

“We talk a lot about playing with our heart and our kids definitely did that,” Ivey said. “Unfortunately it ended at the free throw line. I’ll take our kids every single day — the heart and the effort. We’re growing, we’re so young (eight freshman). We’re getting there.”