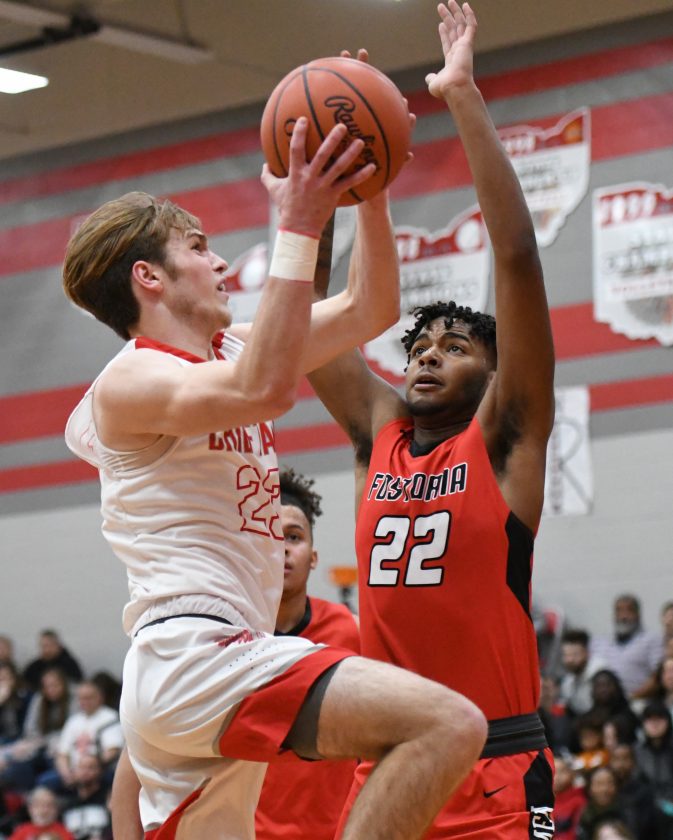 PHOTO BY KENT TARBOX Hopewell-Loudon’s Jordyn Jury (23) drives to the basket for a contested shot over Fostoria’s Zach Ward (22) Saturday night at Hopewell-Loudon.

BASCOM — Hopewell-Loudon’s Jordyn Jury stepped to the free throw line with no time left on the clock and the game tied at 46.

When he converted, the home crowd erupted in cheers and Hopewell-Loudon claimed a 47-46 victory over Fostoria in non-league play Saturday.

“It comes out to a play here or there,” Hopewell-Loudon coach Roger Jury said. “I’m proud of our kids because we challenged them. Nobody’s perfect, but I told them in the locker room on plays I’d get after them, or expect them to be perfect knowing that they can’t and that if we make enough good plays you always give yourself a chance to win against good teams. I think that makes both of us better for the tournament as well.”

The Chieftains (11-4) gained possession when Kyle Rumschlag pulled down a rebound on the other end and called timeout with 2.5 seconds left on the clock. The Chieftains inbounded the ball to Jury and he heaved it toward the opposite end from the top of the arc as time expired. He didn’t make the shot but he did draw the foul.

“I just don’t understand how you don’t allow the kids to decide the outcome of that game,” Fostoria coach Thom Loomis said. “That’s a throw from 55 feet by a player that initiated the contact to try to draw the foul. In that situation you just let the kids go to overtime and decide the game themselves.”

Rumschlag’s rebound came after a missed free throw with 3.6 seconds left by Avondre Reed, who tied the score at 46 with a 3-pointer with 51 seconds to go. H-L gained a 42-41 lead earlier in the quarter on a trey by Travis Milligan at 3:51.

It was a tight game throughout with seven lead changes and neither team being able to pull ahead by more than five points, a differential made by Ried Jury’s field goal at 4:15 of the third quarter to give the Chieftains a 31-26 edge. But the Redmen (9-5) clawed their way back, overtaking H-L with a 6-0 run with a field goal from Ke’Shawn Carter-Stokes and four points from Reed on a 4-foot jump shot and a pair of free throws. The third ended deadlocked at 36.

The first quarter saw two lead changes and was tied at 11 when Devin Mauricio scored on a putback and hit another field goal to put the Redmen up 15-11 at the end of one. Marshall Reinhard tied the score at 15 at 6:09, but Dom Settles regained the edge for the Redmen, 17-15, on a fast break layup created by E.J. Williams’ steal on the defensive end. From that point, FHS did not relinquish the lead the remainder of the first half, taking a 24-21 advantage into the locker room.

Jordyn Jury paced the Chieftains with 13 points and nine rebounds while Rumschlag put in 11 points.

“We did a heck of a job on those two,” Loomis said. “We held (Jordyn) Jury way below his average or at least below his average, we held Rumschlag down. I mean we knew what we were trying to do. We executed our game plan extremely well.

“It was a great high school basketball (game) between two very good teams. It’s a cliché but it’s a shame somebody had to lose and it’s even worse that you have to lose that way.”