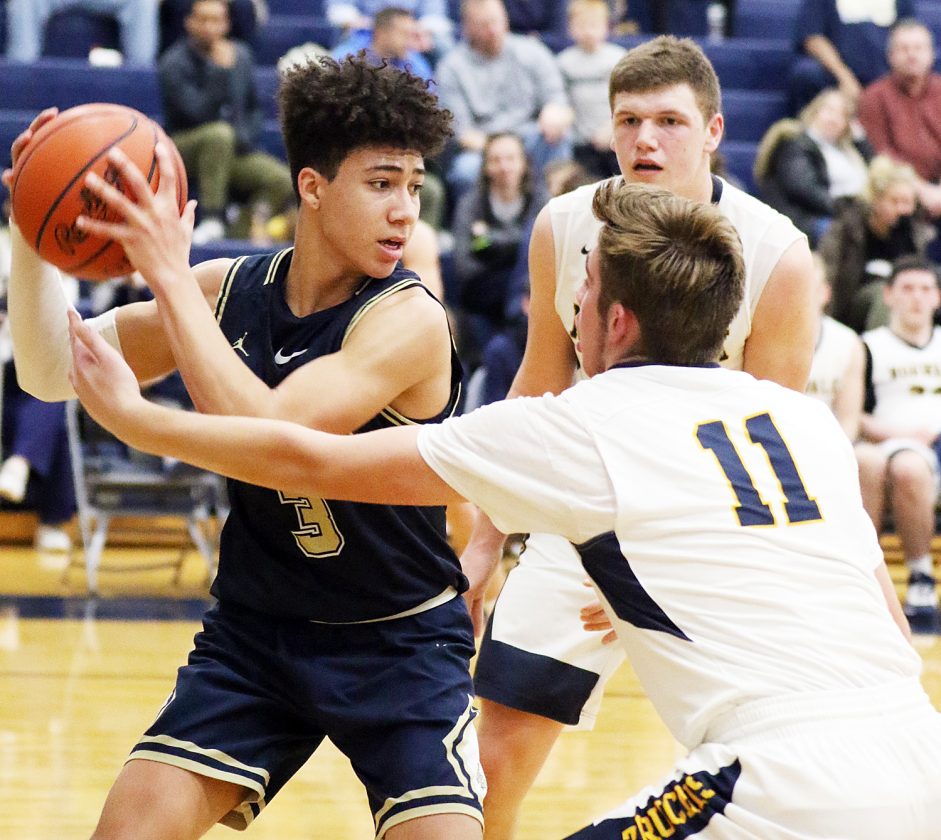 PHOTO BY KATHY ROOT Columbian's LJ Reaves grabs the rebound in the fourth quarter and looks to pass against Norwalk's Ian Minor as Garrett Chapin looks on during Friday's game at Norwalk High School.

NORWALK — For about 12 minutes in the first half, Columbian didn’t quite have a focus or purpose in Friday’s SBC Lake Division game at Norwalk.

But once the Tornadoes found it, that made all the difference. Unfortunately for them, it came too late in a 64-58 loss to the Truckers at Norwalk High School.

“I think we came out with a little more focus in the second half,” Columbian coach Travis Kinn said. “There was a little more intent with what we wanted to do, a little more awareness, and we anticipated much better on the defensive end. I thought we rebounded very, very well on the offensive glass. I think there was just more purpose, more intent and more focus.”

Columbian’s comeback started in the final seconds of the first half. Leading 32-18, Norwalk coach Steve Gray was signaling for his team to hold the ball for the final shot. However, a close shot attempt to the basket was rushed and missed with about 10 seconds remaining, and the Tornadoes’ Cole Zimmerman scored just before the halftime buzzer.

To begin the third quarter, standout LJ Reaves connected on a 3-pointer, and just like that the Tornadoes had cut the deficit to single digits (32-23) in a 30-second span.

“Right before and right after halftime was a tough stretch for us,” Gray said. “We’re up 12 and miss a short one inside, then missed a box out at the other end. It was a seven-point swing potentially, and they had to be ecstatic at halftime to be only down 12.”

After a Reaves basket with 1:25 left in the third, the Tornadoes had pulled to within one possession at 40-37, capping a 19-8 scoring run.

But as they proved the rest of the nine-plus minutes, the Truckers had an answer.

Ryan Sowders scored inside, and Will Gehlhausen converted an inside jumper and was fouled. He added the free throw for a three-point play, and Norwalk took a 45-37 lead into the fourth quarter.

The Tornadoes kept coming, however.

After Garrett Chapin put Norwalk ahead 51-43 with 5:32 left, Columbian made its last surge.

Chase Frankhauser connected from deep for his only three points of the game, and the Truckers turned it over against the Columbian pressure, resulting in a short-range basket from Bryce Burns.

The Truckers again appeared to stem the tide, as Chapin and Garrett Obringer scored back-to-back from point-blank range for a 55-48 lead with 2:54 left.

But Logan Beaston quickly responded with a 3, and off another Norwalk turnover, Reaves scored on a driving basket to make it a 55-53 game with 2:10 left.

After an Ian Minor basket down low for Norwalk, Beaston drilled another deep 3 to make it 57-56 with 1:48 left.

But this time, the Truckers were able to break the Tiffin pressure, as Minor was found wide open underneath for an easy basket, then Ryan Sowders did the same after an empty Columbian possession to go up 61-56 with 1:09 left.

The Tornadoes then turned it over on a traveling violation with 46.7 seconds left, then lost the ball out of bounds with 26.5 seconds left.

Meanwhile, Gehlhausen converted three of four foul shots in that time, pushing the lead to 64-56. The Tornadoes’ Carson Goble scored as time expired for the final margin.

“We got some looks we wanted at the basket that didn’t go in there at the end,” Kinn said. “We could have cut it to one on a missed layup we had, then from there we’re down three and kind of scrambling, and they capitalized on their free throws late.

“I just go back to the focus, intent and playing with a purpose — and I don’t think that was there in the first 10 or 12 minutes tonight.”

Reaves finished with a game-high 23 points on 8-of-15 shooting while also grabbing eight rebounds. Beaston added 10 points and Burns scored nine for the Tornadoes, who finished 22-of-54 shooting from the floor, which included a 9-of-26 mark (34 percent) from three. Norwalk held a 30-28 edge in rebounds and outscored the Tornadoes 10-5 at the free throw line.

For Norwalk, Chapin had 16 points and 12 rebounds on 7-of-11 shooting, while Gehlhausen had 14 points and five assists while sinking 7 of 8 free throws.

“Columbian is a very good team,” Gray said. “We did some things a little bit on the run, which is a bit uncharacteristic of our teams. We did enough to beat a good team at home. “They (Tiffin) can score in bunches, but we also had too many turnovers in the second half to help their cause.”

The Tornadoes have a strong non-league test at home tonight when it hosts Willard (9-1). The Crimson Flashes were upset in overtime on Friday at Margaretta, 63-61, snapping their 24-game regular season win streak.

“Willard is a very good team with a lot of length, a lot of size,” Kinn said. “They create a lot of turnovers by mixing up their defense quite a bit — much like Norwalk did. It will be another good test for us.”