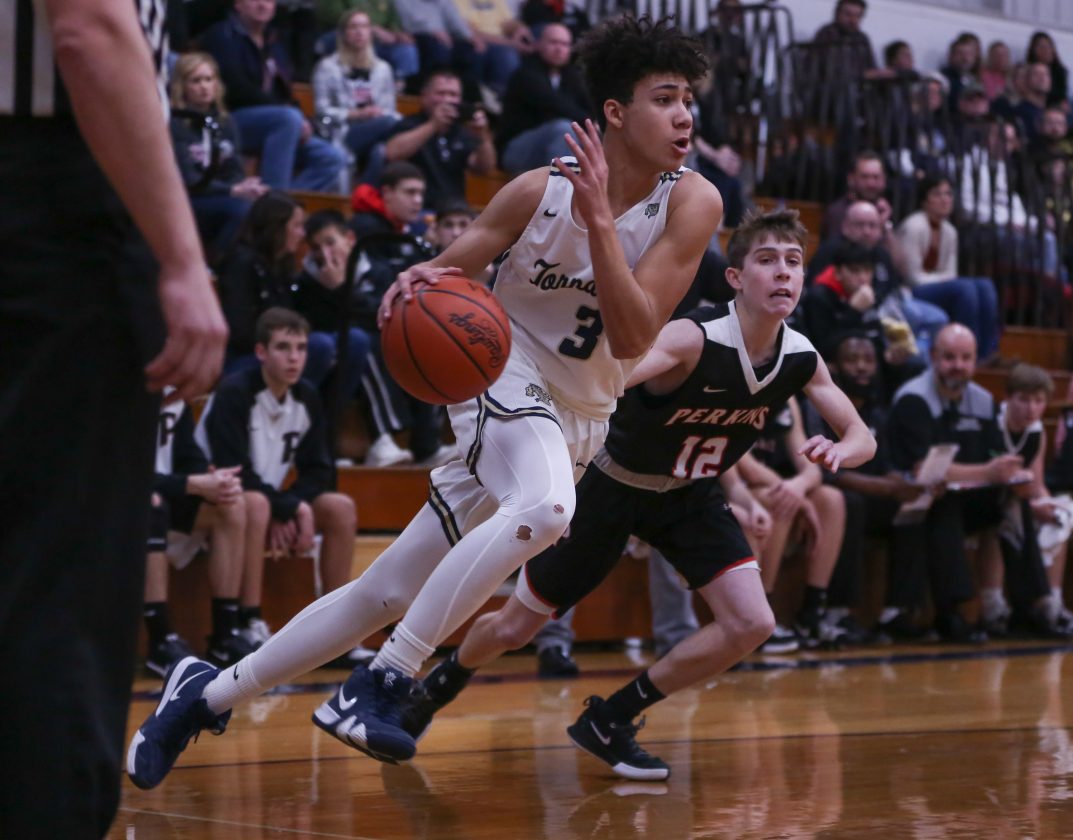 PHOTO BY STEVE WILLIAMS Columbian’s LJ Reaves makes a sharp-angled baseline move to the basket in a game against Perkins Friday in Tiffin.

The Pirates led countless times late with chances to get a big road win.

Perkins led Columbian from the end of the first quarter all the way until the first Tornado basket in overtime, but couldn’t get the win as Columbian stole a 57-56 victory in OT.

Bryce Burns got Columbian five quick points to start the fourth and he tied the game at 46 after his third triple of the contest.

Perkins took a 52-48 advantage after a Tyler Yingling basket and a pair of free throws from Zach Voight with 28.7 remaining.

Columbian freshman Logan Beaston hit two free throws in response and after Perkins split a pair of free throws, Columbian had 15 seconds to tie the game down, 51-48.

The Pirates played good defense for much of the 15 seconds and under 10 seconds — with the Perkins coaches screaming from the sideline to foul — Beaston outmaneuvered a couple Perkins defenders to pull up from 3 and drew a costly foul.

The freshman calmly drilled all three foul shots to send to game to overtime.

“We wanted to get Logan going downhill with one of our shooters in the corner,” Columbian coach Travis Kinn said. “I think Logan hit a pull-up jumper the possession before, so we wanted to give it back to him while he was feeling it a little bit and that is a huge pressure situation to be down three at three free throw line and the first two didn’t even touch the rim. I don’t think the third one did either, but he was very calm and collected and everybody, including himself, knew those three were going in and it was going to go to overtime and we were going to win the game.”

“Our rule of thumb anything under seven seconds up three, we’re going to foul,” Pirates coach Scott McVeigh said. “We’re yelling red light and that’s our strategy. We’re yelling at them, but we got to him too late. Give the Beaston kid credit. He hit three pretty big free throws for them there.”

Beaston, who the Tornadoes were looking to late in the game to score, started OT with a tough layup. Perkins went on a quick 5-0 run after a pair of Sam Siegel layups to lead 56-53 with 1:54 left.

Perkins had to inbound a pass with 25 seconds left on the baseline, but the pass was too long, which led to a Chase Frankhauser steal and a LJ Reaves layup with 21.4 left, giving the the Tornadoes an unlikely victory.

“Perkins probably outplayed us for 36 minutes or 35 minutes and 50 seconds. We were fortunate time ran out there and we were able to steal one at home,” Kinn said. “I don’t think we shot the ball as well as we can either, but one thing about this group is that there is no quit in them.

“Despite our struggles early, we had a hard time getting going, but we found a way to get it done and that’s a credit to those guys in the locker room together and everybody buying in.”

After a 19-16 first quarter, things cooled down a bit with Perkins winning the second period 10-7 and leading 29-23 at the half.

The young Pirates were doing some good things with Siegel’s penetration in the lane either looking for a layup or a dish to Yingling, who had 16 points, despite foul trouble. Just 19 turnovers were too much to overcome in crucial minutes of the contest.

“Our goal was to keep it under 10 turnovers tonight and at halftime we had five. Don’t take any credit away from (Columbian), they are long, athletic, quick … they do a good job trapping you, but our kids followed the game plan to a T. We grew up tonight. We got better tonight, but it’s not going to show up in the win column. They put us in a situation to win and that’s all we can ask of them. We were one possession short tonight.”

Siegel led the Pirates with 17 points, while Voight added 12.

For Columbian, Beaston led the way with 15 points, Reaves had 14 and Burns ended with 13.

The Tornadoes have won three games in a row after an early January skid and have some winnable games on the horizon before a tough end of the regular season with top SBC Lake opponents.

“January always seems to be a tough stretch, but our guys have been alert in practice and have adjusted some things so we’ve gotten some good looks and opportunities here,” Kinn said. “I’m just really proud and pleased we found a way to get it done. Perkins played a hell of a game. They are well-coached, very well-prepared. They came in here and took it to us for most of the night, but were able to make one more play than they were.”