Elmore, Woods and Zender combine for 79 points as H-L improves to 16-0 this season 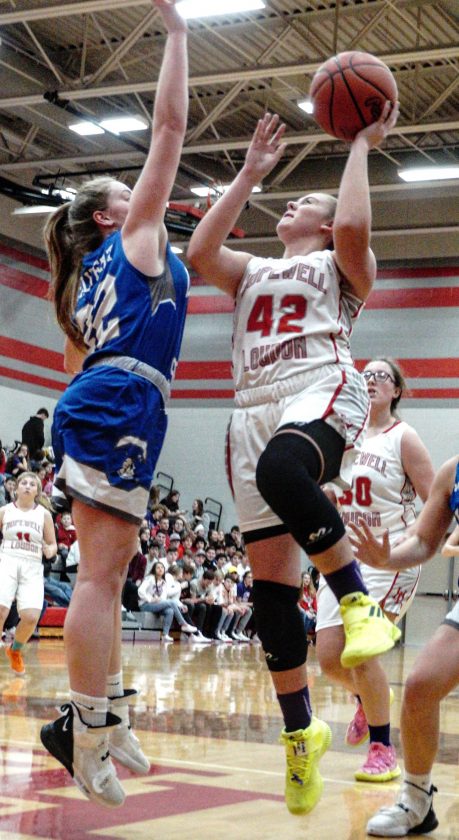 BASCOM — One of MaKayla Elmore’s many basketball skills is a soft shooting touch.

That was perhaps never more evident than the 3:25 mark of the first quarter of Hopewell-Loudon’s game against Calvert here Tuesday night. That’s when Elmore’s short jumper bounded around a little before coming to rest on the back plate of the rim.

The 6-foot-3 Elmore grabbed the net in an attempt to shake the ball free as did point guard Kaia Woods, who is a foot or so shorter. Neither was able to do so, marking their only obvious moments of failure all night.

The two combined for 60 points and Hopewell-Loudon as a team shot 67 percent from the field in rolling to a 103-35 win over the Senecas.

The Chieftains improved to 16-0 overall and 12-0 in Sandusky Bay Conference River Division play while dropping the Senecas to 2-12 and 2-8.

Elmore and Woods each had six points and Olivia Zender two in a 14-0 run in the game’s opening two-and-a-half minutes. Hopewell-Loudon’s full-court pressure drew 14 Calvert turnovers in the first period and 38 for the game.

By quarter’s end, Elmore had 13 points, Woods had 10 and the Chieftains had hit on 15 of 20 shots with 10 of the baskets the result of an assist. It was an excellent foundation for a 34-12 advantage that put the winners in control for good.

With the full-court pressure game pretty much shelved, the scoring leveled off some in the second period — Hopewell-Loudon outscored the Senecas 17-14 for a 51-26 advantage at the break.

When Calvert was able to get into its offense, the Senecas were effective. Led by sophomore Frannie Webb, who scored 10 of her 11 total points in the first half, Calvert made 4 of 7 attempts in the first period and 9 of 18 at halftime.

“We did (shoot it well) early,” Calvert coach Josh Clark said. “When we got our offense going, we were able to play a little bit.”

“Honestly, I was upset with some of things we were doing on defense in the first half,” Hopewell-Loudon coach Bob Gase said. “We were out of position too many times, not in our full-court, but in the half-court.

“When someone puts the ball down, we like to go after it,” he said. “We weren’t doing that the first half, so they were getting some easy looks. That’s what Jeff (Ritzler, H-L assistant) and I were trying to work on (in the second half).”

Woods was particularly effective in that regard as she came up with 14 steals on the way to 31 points with eight assists. Her backcourt running mate, Zender, had a couple 3-pointers adding to her 19-point total with six steals and four assists.

Elmore meanwhile tossed in 29 points with 11 rebounds, four blocks and eight assists. It was that last figure that caught Gase’s eye.

“That’s one thing I’m really proud of MaKayla — she’s passing the ball great,” Gase said. “She’s looking for the open person. They all are, but she just kind of stands out a little more sometimes because she’s getting a rebound and, instead of dribbling up the floor, she’s looking to pass to someone down the floor who’s open. That makes it a lot nicer for us.”

Kenzie Coleman scored nine, Morgan Searles had seven and Lennah Fox contributed four points and seven rebounds for the Chieftains, who hit on 43 of 65 shots, including 5 of 10 from 3-point range.

Calvert got eight points from Sarah McCarty and six from Kelsey Shiley.

“We can only get better from a game like this — watch film and see what we need to do to be better our next game,” Clark said. “That’s it, you just have to learn from it. You take what you can and move on.”