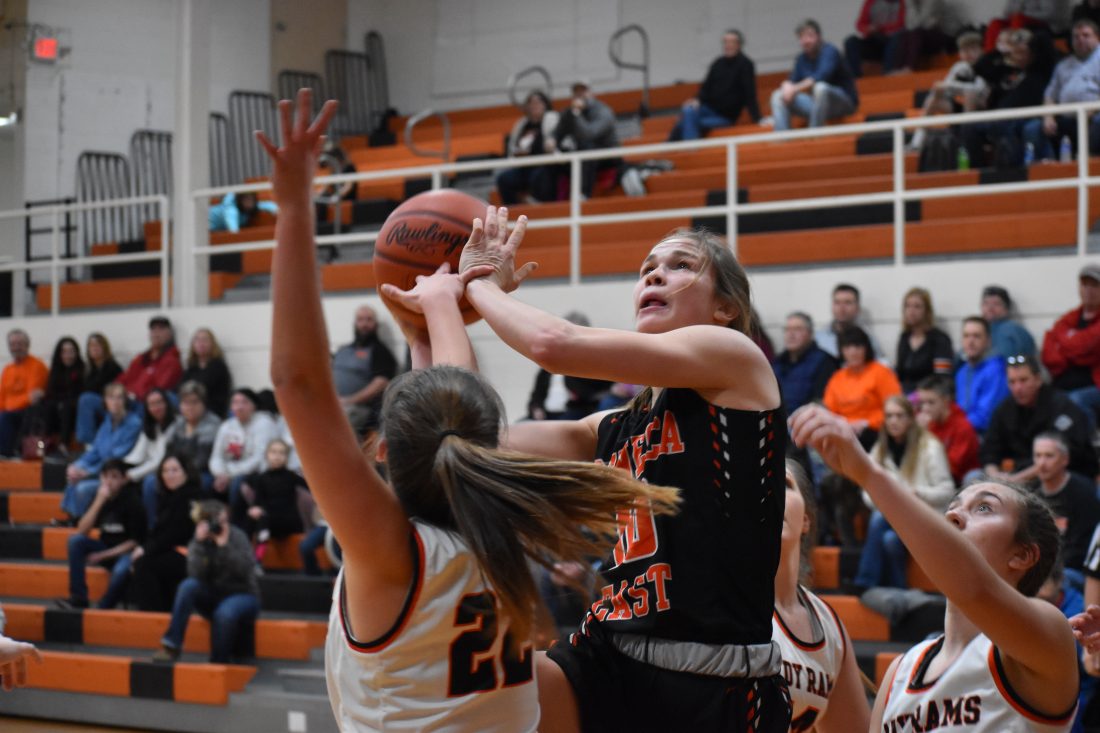 UPPER SANDUSKY — Coaches have a hard time describing what kind of player or person Seneca East junior Jessica Bowerman is.

It’s not for a lack of trying, it’s because there aren’t enough good words to say about her.

But a good thing for her happened Tuesday night as the Tigers dispatched Upper Sandusky 56-24 in Northern 10 Athletic Conference play.

Bowerman — who entered the contest Tuesday with 993 career points — completed a three-point play early in the second quarter to give her the milestone.

It was a little different getting a milestone at the free throw line with just one shot, but Bowerman did what she always does, executes.

“I don’t know what I was thinking to be honest. I just went up there thinking, ‘Don’t miss it,'” she said with a smile. “I feel like it’s more of a team accomplishment because the past couple years my teammates have been extraordinary, I couldn’t thank them enough. They got to where I am today.

“I tried to keep (getting the milestone) off my mind because if I thought about it, it would’ve messed up my game. My teammates did a good job of not bringing it up. Keeping my head on forward and looking for the win instead.”

“We just don’t matchup well with Seneca East with their length and their mentality of pressuring the basketball,” Rams coach Jerry Vent. “Early on, after the first few possessions where we turned it over, we got into a little rhythm breaking their pressure and we hit some 3s, which was the game plan. We knew we wouldn’t take it inside a lot against their length and height.

“We prepped their defense the last few days, but it’s tough to simulate their length and athleticism.”

Seneca East put the game away in the third quarter, outscoring the Rams 21-7 as Alexis Hicks had 10 of her 12 points in the period.

“We adjusted a few things defensively and as a coach we could always play a lot better than what we did, but it’s tough to come on the road on a Tuesday night,” Tigers coach Don Vogt said. “But I’m very proud of them. They came here and took care of business.

With the win, the Tigers have two league games left. They are in position to repeat as N10 champions if they continue to take care of business, which is what their leader — Bowerman — intends to do.

“We gotta stay focused. We can’t let up and be satisfied,” she said. “Like coach said in the locker room, sometimes we get satisfied with ourselves and we have to keep accelerating our game.”

Bowerman led the Tigers with 15 points, while Makenna Depinet chipped in 12 points and Amelia Boes finished with six points.

Bowerman not only leads the Tigers in points most nights, but leadership is a consistent adjective used with her. It even went as far as Seneca East volleyball coach Greg Hendrix calling her Captain America.

“First of all, she’s just a solid young person. She has her head screwed on straight,” Vogt said. “Her grades are impeccable, she is personable, she’s friendly with all of the kids no matter who it is and she has really kind of grown into the role of being our leader.

“Everybody looks up to her — she doesn’t do it in a commanding way — they just know. She’s just a phenomenal almost once-in-a-lifetime kind of kid to be able to coach. I just can’t say enough about her.”

So where does the leadership and the fuel come from to play every single minute at 110%?

“I would say it comes from trying to give back to teammates because they push themselves that much too,” she said. “I want to try to do the same thing for them too because they give 110% all the time during practice and games.

“I don’t know where it comes from to be honest,” she said referring to her inherit leadership abilities. “My coaches have helped me with it. I’ve been in band … I guess I’ve learned it from my brothers too, I’m not really sure.”

One thing is certain, if the the Tigers continue to follow Bowerman and play like she does, more banners will hang at Seneca East.