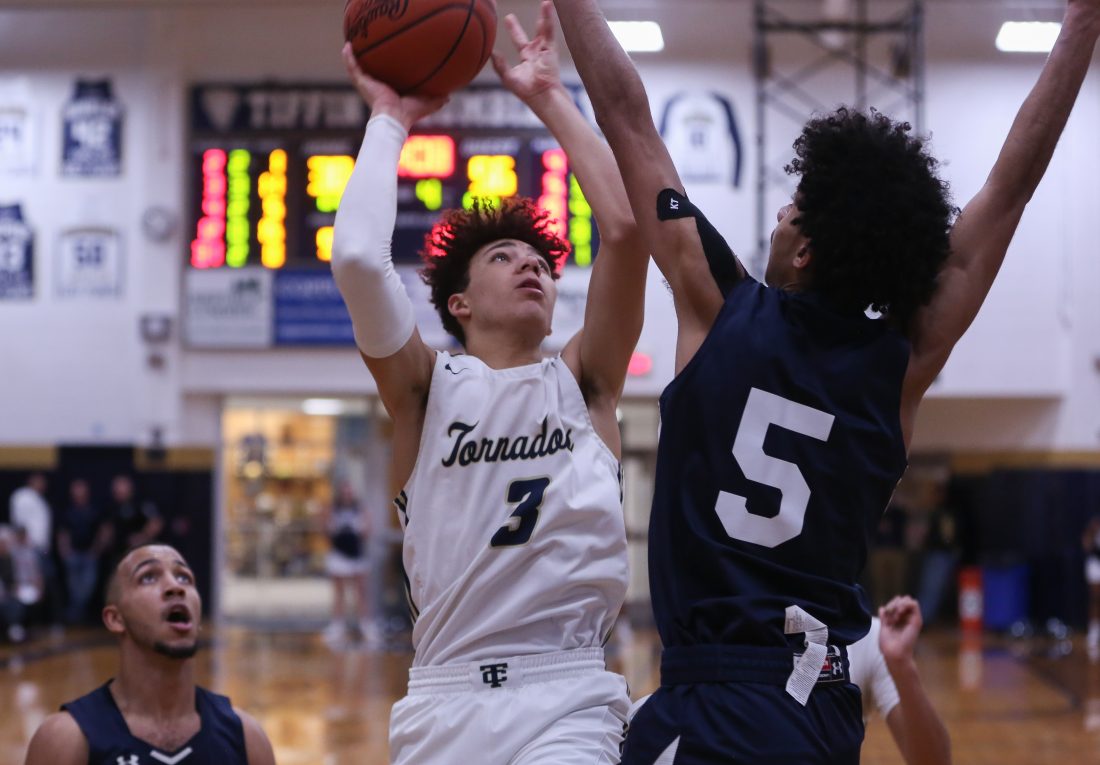 PHOTO BY STEVE WILLIAMS Columbian’s LJ Reaves gets a shot off in the lane against Sandusky's Trent Scott Friday in Tiffin.

Unbeaten Sandusky looked focused and hungry early on Friday night as it blitzed Columbian 22-7 in the opening quarter, creating turnovers and taking the ball to the basket for layups.

Even despite a few lulls during the final minutes of the first half and first few minutes of the third quarter, Sandusky picked it back up to get a 71-54 Sandusky Bay Conference Lake Division victory.

“We came out very focused defensively, but the last two or two and a half minutes of the half we kind of settled a bit,” Sandusky coach Colin Irish said. “We hang our hat with our defense and any time you can come here and get a win like that … it’s a good win.

“They’re (Columbian) coming. I keep saying these guys are coming. They do a great job with those kids and they play hard. They tried to come back, but we weathered the storm and made some shots taking it to the rim. I think we settled a little too much because they were sagging it in a little bit, so we were open, we just didn’t have a great shooting night (29-61).”

The game started to get away from Columbian (6-6, 3-4) in the middle part of the second quarter as Sandusky tallied a 12-1 run to begin the period. The lead sprung to 34-10 after a pair of free throws from Tahj Staveskie.

Then Columbian responded with a 9-2 run to finish the half down 36-19.

“I thought the first four or five minutes defensively we were OK. We just struggled getting going offensively. We took some shots that led to some transition opportunities for them,” Columbian coach Travis Kinn said. “We had some good looks, we just had a hard time putting them into the hole. When you have a hard time doing that, it leads to transition points, especially for a team like that is fast, quick, athletic. Tahj is one of the best players in the area if not the state. When the ball is in his hands, they are tough to stop.

“I thought the group that ended that first half did a great job cutting the lead to 17, which the way we were playing we were ecstatic coming in (locker room) to be down 17, but we could have been down 30.”

The Tornadoes felt good being down just 17 and it showed at the start of the second half. Columbian’s confidence grew after a 12-4 run to begin the third. It got within 40-31 with 1:16 remaining in the third period, but Sandusky got it back to 45-33 entering the fourth after a Staveskie 3-pointer.

“We started the second half well, putting some pressure on them, forcing turnovers. We got it to nine at one point, but just couldn’t get over that hump from there,” Kinn said. “I thought that group really sparked us. That made it a game at least and made it respectable.”

Sandusky closed the door on any Columbian comeback with the first six points in the fourth quarter to lead 51-33.

The Blue Streaks played tough defense Friday, but they were extremely tough on talented Columbian freshman Logan Beaston. Beaston, the Tornadoes’ leading scorer coming into the contest, was held scoreless.

“We keyed on Beaston. We put Tahj on him and he made him feel very uncomfortable and made him do things he wasn’t comfortable with,” Irish said. “We just stayed on him to make sure he couldn’t get it going. We played pretty clean defensively, especially in that first quarter. (London) Havens was good on the boards with 15 boards or so, so overall, it was a good performance.”

With Sandusky locking down Beaston, it was LJ Reaves (18 points) and Burns (17) who led the charge for the Tornadoes.

“Their focus was Logan. They guarded him with the intention of him not getting lose and that’s a credit to Logan and his work ethic and preparation with his ability to score the ball,” Kinn said. “He did some other things to get the other guys involved even though he wasn’t scoring. Cyrus has been nothing but great for us this season and LJ did some good things offensively and defensively tonight, playing the middle of our 2-3 zone, impacting some of their shots in the middle. Lots of credit to him and those guys.

“I think it’s important that we continue to progress. We continue to believe in what we’re doing. We continue to be better at what we’re doing. I think as long as we do that, the results will come. This is a tough sport and a long year with lots of ups and downs. Seems like every year there’s a time in January no matter how well or bad you’re playing, it’s a struggle. I give credit to our guys, they keep showing up and getting better and working hard in practice. We just have to find a way to weather this storm and get through some of these tough patches.”

Staveskie and William Simpson each put in 19 points for the Blue Streaks, while Trent Scott had 10 and Havens finished with eight.