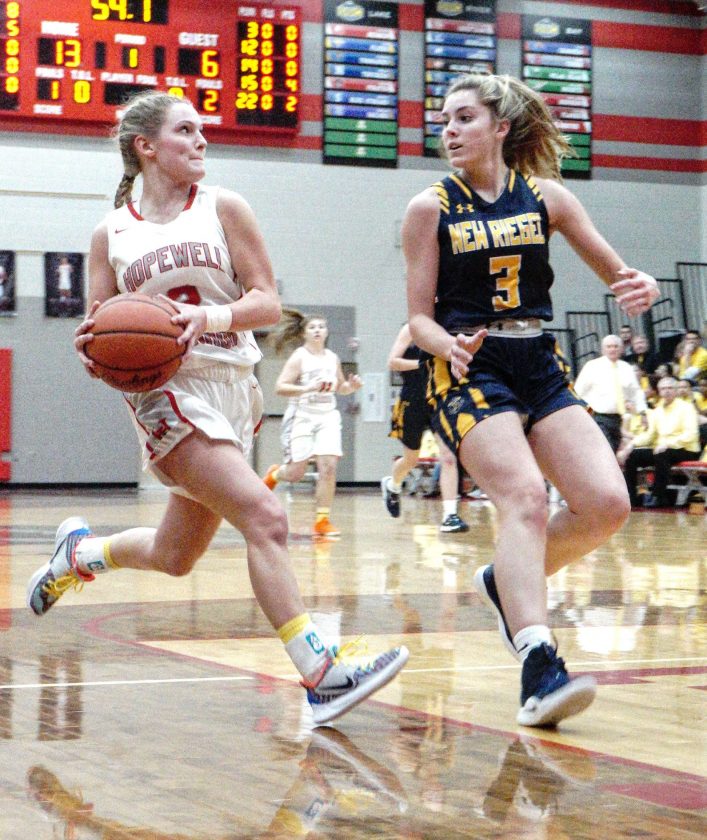 BASCOM — New Riegel stayed with Hopewell-Loudon into the second quarter.

But then the shots stopped falling.

The Blue Jackets trailed the Chieftains 15-12 with 16:31 left in the first half, following a jumper from Brooklyn Gillig and two free throws from Jordan Hohman.

But the Blue Jackets managed just one free throw the rest of the period, and missed their next 11 field goal attempts.

“We had good shots,” New Riegel coach Cindy Walerius said. “Some of those were just little layups that just … it was like there was a lit on the basket down at that end.”

And when you don’t score for a long stretch against a team like Hopewell-Loudon, you’re in trouble.

Behind Olivia Zender, Kaia Woods and MaKayla Elmore, the Chieftains ran off a 12-1 run, and went to halftime up 27-13.

It was the key stretch in a 61-30 Hopewell-Loudon win.

Zender had a big night, with 25 points and four rebounds. She made 7 of 10 3-point attempts, while Woods had seven steals to go with 12 points six assists, and Elmore had 24 points, 11 rebounds and four blocks.

“Our halfcourt defense, I don’t want to say it was a little weak last game … I felt, and we got on the girls about playing halfcourt defense,” Hopewell-Loudon coach Bob Gase said. “New Riegel’s tough. They’re a good team, and they’re well-coached. The biggest thing was the defense stood strong, and getting rebounds.”

Offensively, Hopewell-Loudon was 25 of 47 from the floor, but only three players — Zender, Elmore and Woods — scored in the win.

“We didn’t particularly run the ball as well as we normally do,” Gase said. “Basically (Zender, Elmore and Woods) just happened to be in the right spot. It’s not necessarily that they’re the only ones that can score, it’s just that Olivia was in the right spot, MaK was down low and Kaia was stealing the basketball and going down (court).”

Hopewell-Loudon improved to 10-0, 8-0 in the Sandusky Bay Conference River.

“Wherever Kaia got, you have to know where she’s at,” Walerius said. “I don’t know how many steals she got, but most of them were just our lazy passes, and we’ve got to definitely clean that up.”

At the same time, Walerius saw positives with her team’s defense.

“I thought Jordan Hohman did a really good job defensively inside for us,” she said. “If we can just cut down on some of the turnovers that were out mistakes, … we just have to clean that up, and hopefully it’ll be a different ballgame next time.”