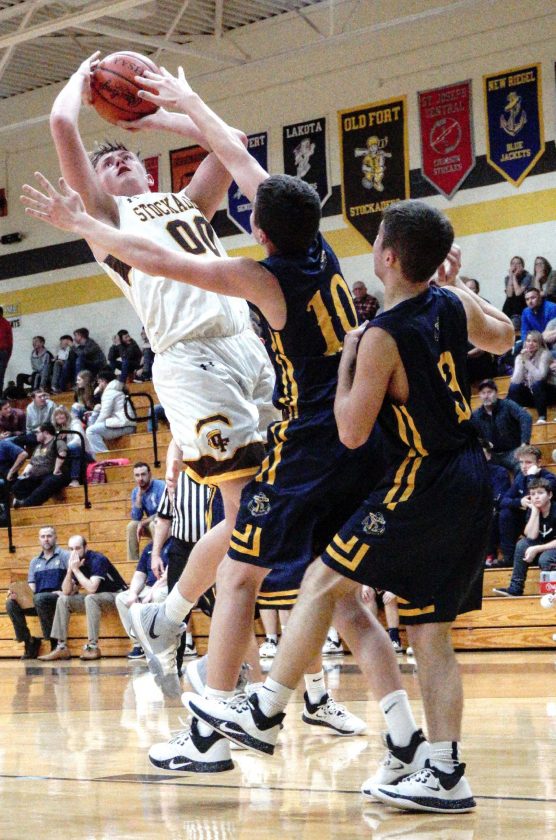 OLD FORT — It was Allison Adelsperger’s night early and Carson Steyer’s night late. That meant it was all good, all night for Old Fort.

Adelsperger, an All-Ohio volleyball player and 1,000-point scorer in basketball, was honored as the latest Old Fort Athletic Hall of Fame inductee during pregame ceremonies.

Then Steyer powered for 29 points, 20 of them in the second half, to lead the Stockaders to a 53-38 win over New Riegel here Friday night.

Old Fort improved to 12-1 overall and retained a two-game lead in the Sandusky Bay Conference River Division race with its ninth win without a loss. But it wasn’t particularly easy, especially early on.

After Steyer opened the game with a 3-pointer, the only one of the night for the Stockaders, New Riegel gained the upper hand. Logan Schalk scored off a Brandon Gillig pass, Gillig scored off Christopher Acree pass and Acree scored on a baseline drive.

Nick Reinhart added a couple buckets as New Riegel eased to a 12-7 lead at the first break after having hit 6 of 10 shots and out-rebounding the taller Stockaders by a couple.

The Stockaders got things turned their way in typical fashion — drawing multiple turnovers with a variety of trap looks in full-court pressure.

New Riegel struggled against it the rest of the night. The Blue Jackets finished with 28 turnovers, 19 of them over the middle two quarters. Not surprisingly, Old Fort outscored New Riegel 33-16 over that time frame and seized control of the game.

“We mixed it up and got a lot out of it,” Old Fort coach Eric Hoover said. “I felt like Garrett (Havens) came in and was a spark for us off the bench. He got a lot of deflections and knockaways at the top of the press with his length. That led to some extra possessions for us and some more scores.

“The same thing with Jordan Smith (five steals) — he came in and gave us a little energy and quickness,” he said. “We kind of got it going then.”

Havens scored off a Colin Nutter (six points, five rebounds) steal and on an inbound play as Old Fort drew even at 15-15 with 4:48 left in the half. Steyer added six points over the final four minutes and the Stockaders took a 23-17 lead at the half.

“They’re long, they’re physical and aggressive,” Losey said. “They do a nice job on the second level of covering up the passes as well. If you’re going to beat that, you have to do a tremendous job at all three levels and get some scores out of it as well. We’ve just got to do a better job of taking care of the ball.

But Steyer and the Stockaders were just getting started. New Riegel had 10 more turnovers in the third period and at the other end, Old Fort was successful in getting the ball to the 6-foot-3 Steyer inside. He responded with 12 points and four of his six total rebounds, He scored his team’s final eight of the quarter in pushing the margin to 40-28.

“That’s pretty much what we try to do all the time,” Hoover said of the inside attack. “It’s no secret that we have some very good post players and we definitely had a size advantage tonight.

“(The Blue Jackets) make everything real difficult for you,” Hoover said. “I’m not sure what their defensive average is but you look at their scores, they don’t let people score a lot. I wasn’t surprised we were in the 50s. I was just hoping we could hold them and we were able to get them a little out of control at times with the press.”

Schalk and Joe Tiell each scored 10 and Reinhart had eight for the Blue Jackets, who fell to 2-10 overall and 2-7 in the River Division.