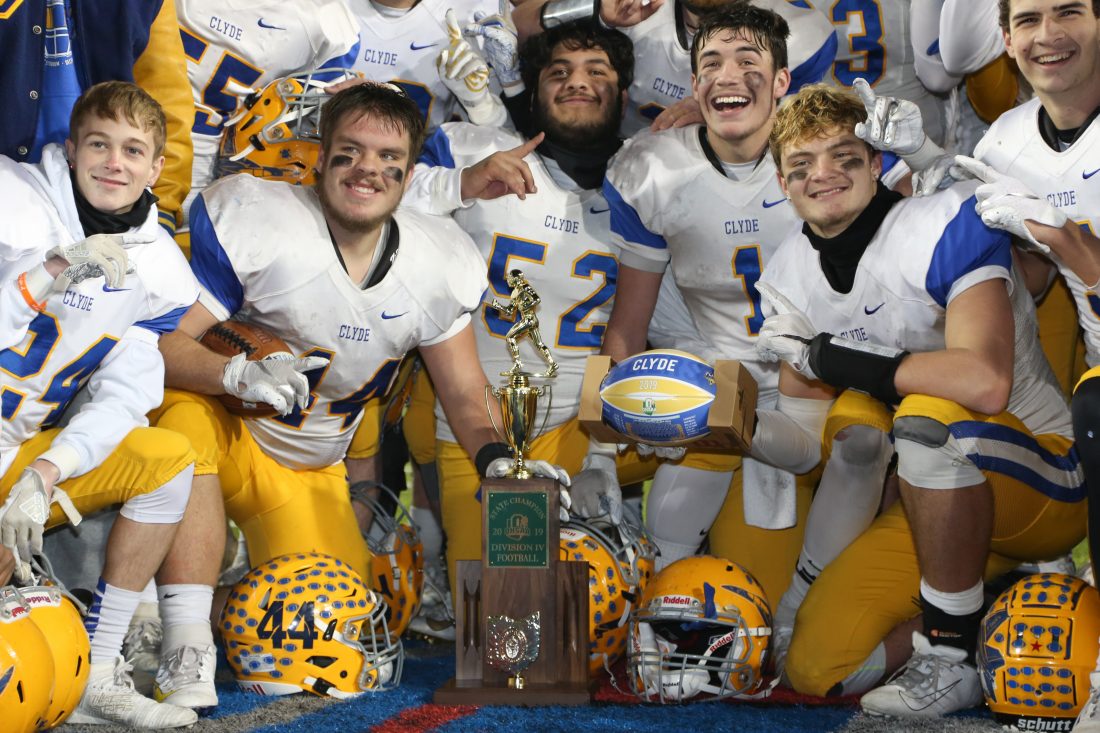 “That’s what he does,” Carter said. “He’s that hard-nosed kid that’s going to grind it out for you. He had 28 carries today. I told them this week if we had to give the ball to Gunner 40 times, that’s what we’re going to do.”

Clyde senior quarterback Ryan Lozier added to the onslaught with 84 yards rushing and two touchdowns while also throwing for 96 yards.

The Fliers’ defense, meanwhile, forced three turnovers and generated 14 points off those turnovers while holding the Panthers’ offense to 135 yards.

Clyde entered the playoffs seeded eighth in Region 14 and became just the second regional 8-seed to win a state football crown. The other 8-seed to win a title was St. Henry in 2004.

“It’s tough to put into words the feeling right now,” said Carter, who played on Clyde’s 1994 state runner-up team. “This group, and I’m going to get emotional, but this group has bought in. They didn’t blink. They just said, ‘Hey, we’re going to get it done. We’re going to get in and figure it out.’

“I made a statement a while ago that if we get in (the playoffs), we’ve got a shot,” Carter said. “This group was just determined to play.”

Still, the Fliers took a while to get going.

They fumbled their first two possessions before scoring on their next six.

Lozier got the scoring started by capping a nine-play, 47-yard drive with a 1e-yard touchdown run with 1:17 left in the first quarter.

On the ensuing drive, the Panthers drove 62 yards and running back Mitchell Ford finished the drive with an 8-yard touchdown at 10:11 remaining in the first half to tie the game at 7.

Clyde then scored 35 unanswered points over the next three quarters.

Golden scored four of those touchdowns on runs of 2, 1, 1 and 5 yards, and Lozier added a 1-yard TD run.

Licking Valley (14-1) scored the game’s final touchdown with 55 seconds remaining in the fourth quarter when quarterback Carson Conley connected with Logan Bragg from 4 yards out.

The A-T will have full coverage of the event in Monday’s edition.