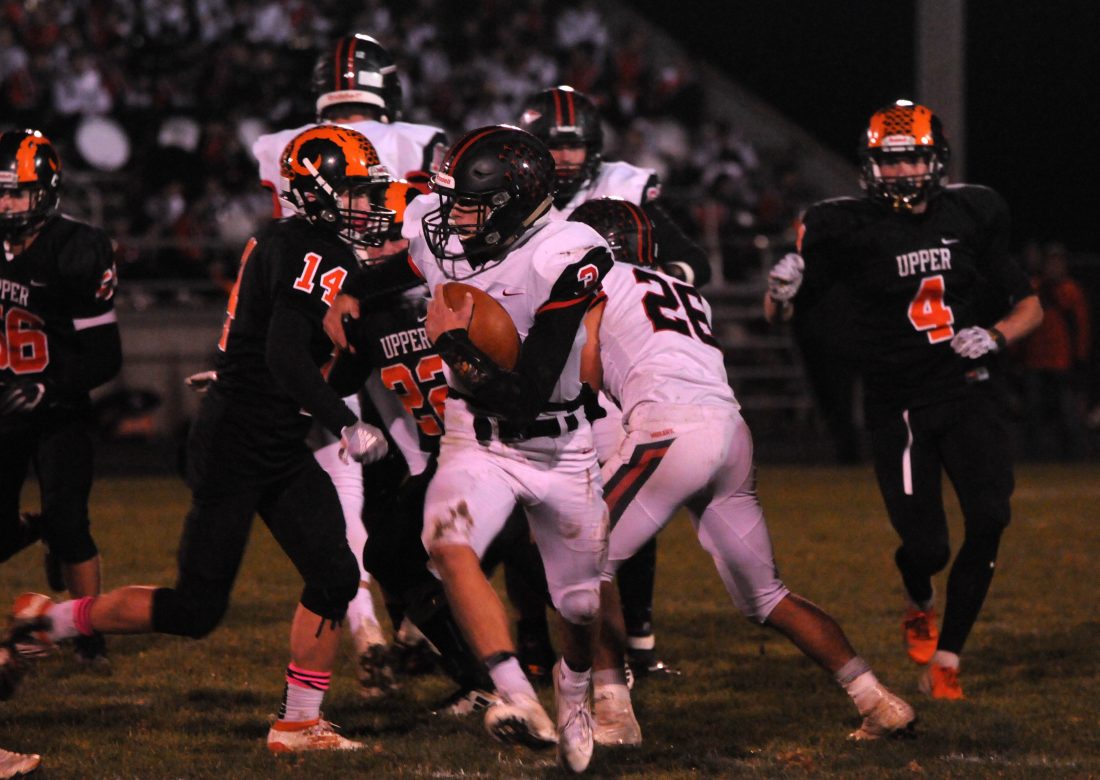 PHOTO BY JONATHON BIRD Mohawk's Landen Snyder escapes from Upper Sandusky's Brayzin McDaniel and Eric Bils during the first half of a football game Friday.

UPPER SANDUSKY — The way the numbers fell, it seems likely Mohawk was headed to the playoffs win or lose Friday night.

But the Warriors were leaving nothing to chance.

A defensive touchdown in the first minute was a spark and Mohawk added scores on four of its first five possessions on the way to a 46-7 romp over Upper Sandusky.

The win gave the Warriors a 6-4 record, 4-3 in the Northern 10 Athletic Conference, both results all fine and good.

But more importantly, they claimed the eighth and final spot in Region 26 of the Division VII playoffs. Mohawk will be at Leipsic Friday for an opening-round match. The two met at Warrior Field last year with the Vikings winning 40-14.

“It’s been an up-and-down year,” Mohawk coach Eric Daniel said. “We graduated 18 starters last year and to make the playoffs in what most people considered a down year is a testament to our kids and the program.”

Tyler Hayman intercepted a Mason Vent pass on the game’s third play and returned it 30 yards for a touchdown. With 11:08 still to play, Mohawk already owned a 6-0 lead.

That served as proof the Warriors were more than ready for this final regular-season challenge even if it wasn’t particularly evident initially.

“We were actually a little flat in pregame,” Daniel said. “It just seemed like we were going through the motions with not a lot of emotion.

“But our kids operate in a different way,” he said. “They’re not a rah-rah group, but they play between the whistles. I’m proud of the way we got on them early and then stayed with it.”

A quick three-and-out and punt left the Warrior offense on its own 36 for its first showing of the night. Mohawk covered the distance in chunks with a 19-yard pass from Landen Snyder to Bryce Lange and runs of 22 yards by Mason Danner and 17 by Jesse Leeth.

The touchdown went to Leeth on a 2-yard run and Snyder’s pass to Hayman for the extras made it 14-0.

The Rams (2-8, 1-6) responded as Vent hooked up with Diago Cazares for a 47-yard touchdown pass to trim it to 14-7 with 4:54 still to go in the first period. But Upper Sandusky couldn’t sustain — the 59-yard scoring drive produced nearly half of the Rams’ 138 yards in total offense for the night.

“When we executed, they had a hard time moving the ball,” Ram coach Russell Hall said. “But failing to execute and the little mental mistakes have been a thorn in our side all year. If you make a mental mistake and you don’t quite execute what you needed to do on defense, you give up big plays.”

The Warriors came up with several.

Snyder broke away for a 50-yard scoring run on Mohawk’s next possession and then Danner’s interception set up a Snyder 14-yard TD pass to Hayman for a 30-7 Warrior lead at the quarter break.

The margin grew to 40-7 by halftime as Danner had a 5-yard scoring run and the Warriors recorded a safety on the following kickoff.

A running clock made quick work of the second half, but Mohawk iced it with a 9-yard scoring run by Steven Routt.

While the defense swarmed the Rams most of the night and came up with five turnovers, the offense totaled 370 yards, including 321 on the ground. Snyder had 110 yards on just eight carries, Leeth added 107 yards on 13 tries and Danner finished with 65 on 11 shots into the line.

“Our team puts a lot of hard work and determination into everything we do,” senior lineman Bryce Sheets said. “I’m so proud of everybody. We overcame a lot of adversity from the beginning of the year, losing a lot of people from last year.

“There is no better feeling than being able to go into Week 11 with this fresh group of kids,” he said. “Not a lot of these kids were able to get a lot of playing time last year. This is just an amazing feeling to get back in the playoffs.”

Daniel said the turning point for his club came in rallying to beat Bucyrus 20-13 in Week 7, part of a 4-1 finish to the season.

“We were down 13-12 with a minute left and we had that drive at the end of the game, and it was like, ‘My God, maybe we’ve got something here,'” Daniel said.

“Even last week, when we lost to (N-10 co-champ) Wynford, we played them tough and made them earn it,” he said. “Our guys have bought into what we’re selling and I’d go to war with them against anybody.