TC’s Frankhauser and Reaves connect for 3 TDs in thriller 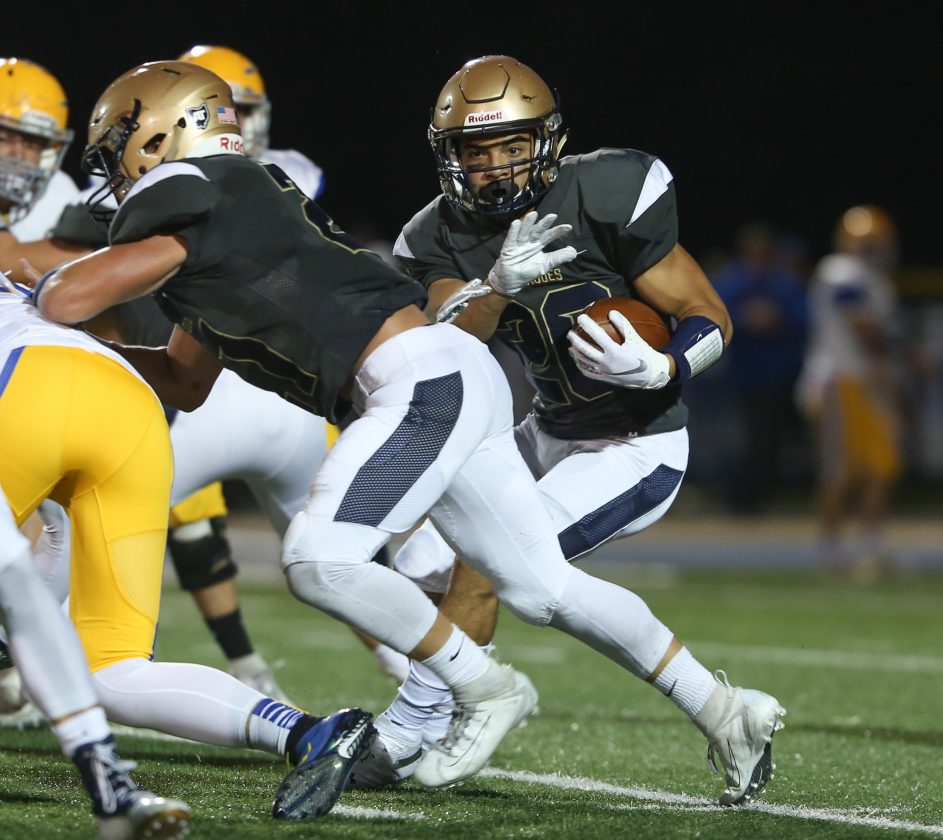 PHOTO BY STEVE WILLIAMS Columbian’s Brody Conley lays down a lead block as Kesean Jackson cuts in behind and finds an open lane for long yardage against Clyde in Tiffin Friday.

Down to Clyde’s 21 with less than a half-minute remaining in regulation and the game tied at 42, Judd Lutz was feeling confident.

Quarterback Chase Frankhauser made him feel that way.

Frankhauser had already thrown four touchdown passes, and moved the Tornadoes deep into Flier territory after Clyde had tied the game on a Ryan Lozier TD run with 51 seconds left.

“We felt like we’d been explosive,” Lutz said. “Chase was feeling it. You could just see it in his eyes.”

And with a chance to give Columbian a victory, Frankhauser looked to one of his big-play receivers.

LJ Reaves already had made a big impact in the game. He caught a 5-yard TD pass from Frankhauser with 10 seconds to go in the first half, which put Columbian up 28-21. Then, with the game tied at 35 with 2 ½ minutes left in the fourth, he hauled in a 15-yard pass to the right corner of the end zone.

Now, with the game (again) on the line, Frankhauser went back to Reaves.

Reaves again delivered, bringing in a 21-yard touchdown catch, this one in the left corner of the end zone.

Seconds later, Nick Koerper claimed an interception off a throw from Clyde’s Carson Rieman on a trick play to seal it.

Frankhauser finished 14 of 21 for 299 yards and five touchdown passes. He also ran for 137 yards, adding an 8-yard touchdown run late in the first quarter. Reaves finished with five catches for 92 yards.

“Big-time players make big-time plays in big-time games,” Lutz said. “Chase Frankhauser had a heck of a good game, and then LJ Reaves did not disappoint. We’ve seen it for a couple of years now. Ball’s in the air, he’s in the vicinity, we like our chances. He made three tremendous plays, and we needed it.”

They needed it because Clyde was relentless. Lozier’s touchdown run that tied the contest — his second — appeared to give the Fliers momentum.

But it didn’t last long.

“I thought we played well,” Clyde coach Ryan Carter said. “Just… they had the ball at the end, we didn’t.”

Carter said he considered going for two after the Lozier touchdown inside the final minute.

“(Columbian’s) got three timeouts,” Carter said. “Give yourself a chance, see if you can get to overtime.”

The Tornadoes scored on the first play from scrimmage, when Kesean Jackson took a handoff along the left side and went 88 yards for a touchdown.

Clyde came right back, with Nick Webb scoring on a 43-yard touchdown run.

The Tornadoes then went up 21-7 after Frankhauser’s TD run and a 47-yard catch-and-run that went from Frankhauser to Koerper.

But Clyde came right back on a pair of Gunner Golden touchdown runs.

Reaves first touchdown catch at the end of the first half put Columbian up 28-21 at the break, but Clyde controlled the third quarter. The Fliers limited Columbian’s offense to just five plays in the period, and TD runs by Golden and Lozier gave Clyde its only lead of the game — 35-28 with 2:34 left in the quarter.

Clyde followed that up with a defensive stop, but a penalty helped thwart the ensuing Flier drive, and forced a punt.

“We did not execute very well on that drive,” Carter said. “You’ve got to credit (Columbian). Their kids made plays.”

Lutz said the Tornadoes defense did what it needed to do.

“We told the defense at half, one stop could be the difference, two stops could be huge,” he said. “They found a way.”

TC tied the game at 35 when Frankhauser found Koerper on a 16-yard score with 8:20 left.

Jackson finished with 141 yards on six carries, while Nick Jackson had two catches for 69 yards.