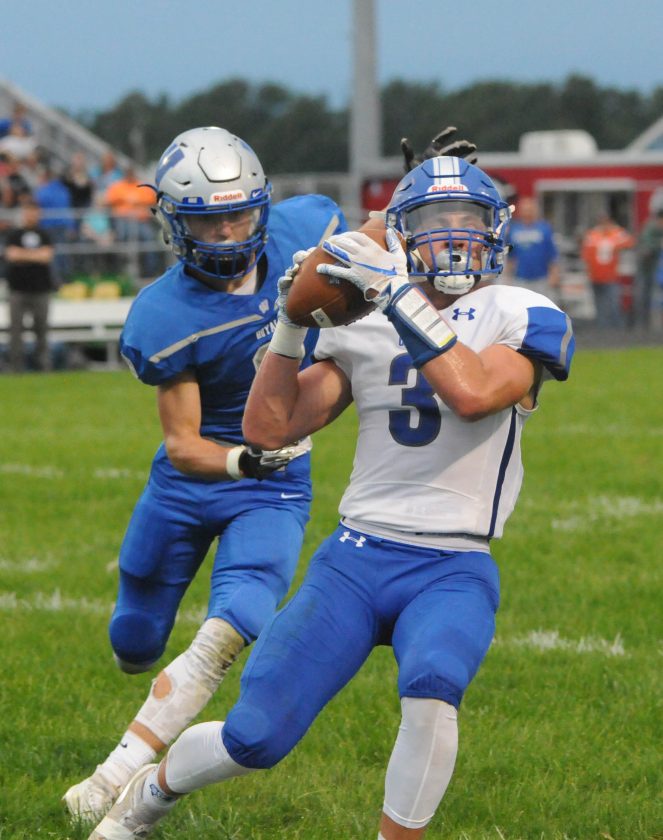 BUCYRUS — Calvert ran and passed the ball up and down the field Friday at Wynford.

However, it didn’t translate to any touchdowns.

The Senecas moved the ball inside the redzone five times and kicked three field goals in a 13-9 loss.

Calvert had the makings of a big night offensively but too many negative plays and penalties at key moments prevented it.

Meanwhile, Wynford scored all 13 of its points in the first nine minutes of the contest, and still won with timely defense.

“It’s a tough one to swallow when we move the ball and we get inside the 5 or the 10 and then we fail to punch it in. Some of that might be on me, I probably should of called a couple different plays,” Calvert coach Steve Reser said. “At the same time, I thought our men gave great effort no matter if it was on the 50, 5 or 1 and I think Wynford did the same.

“Hats off to Wynford, their coaches and their players. They’ve always had a great program here and obviously that continues. We want to reach that. This is why we play games like this to see what we are made of and I think we have a pretty good gauge right now.”

Calvert (1-1) took the opening drive right down the field but stalled at Wynford’s 21 after a bad snap. Quinten Ronski nailed the 38-yard field goal to give the Senecas a 3-0 advantage early in the first period.

The lead evaporated in a hurry.

On the ensuing kickoff, Ronski hit a squib kick that found the hands of Wynford’s Kendall Blair. Blair made a couple Senecas miss and took the kick 75 yards to the end zone. The extra point was missed, but the Royals led 6-3 12 seconds later.

“Offensively, it was disappointing. To walk out of here with a win I’m happy, but our offensive effort … our offensive attention to detail has to be better. Too many missed assignments and opportunities. We got to get better. But the win I’ll take that.”

After the kickoff return, Calvert went three-and-out. Wynford drove the ball down the field and Cody Taylor ran in a 5-yard TD up the middle as the lone Wynford highlight on offense at the 3:32 mark of the first quarter.

“One of our goals was to not give up a 10-play touchdown drive. We did that,” Reser said. “That showed on the kickoff return, but at the same time, I know they have a young team and so do we. We have some seniors, but we have a lot of guys playing in their first game.

“It was a little different last week with Monroeville because we jumped on them quick and it was a different atmosphere here tonight. To come here in a four-point game, obviously we were on the wrong end of it, but I don’t know what more our players, coaches, our fans could ask for than a game like this tonight.”

At the beginning of the second quarter, Calvert had a 16-play drive end on Wynford’s 1-yard line. The following drive ended inside the Royals’ 10, but after a crucial sack, Ronski drilled a 35-yarder to end the first half.

To begin the second half, the Senecas had a 12-play drive end with a Ronski 30-yard field goal.

The Royals tried to put the game away with a touchdown on the ensuing drive, but like they did to the Senecas all night, Calvert had a goal line stand at the beginning of the fourth period.

Calvert had one last crack to win the game. With 5:36 left and the ball at their own 9-yard line, the Senecas began to march the ball down the field. The biggest play of the drive was a perfect throw from Jack Shultz to Nick Seifert to Wynford’s 7-yard line for a 37-yard connection.

Aaron Rombach ran up the gut for 3 yards, Shultz lost 2 on the next rush up the middle and then on third-and-goal from Wynford’s 6, Seth Benedict sacked Shultz for a 13-yard loss. Shultz tried to make something happen on fourth down, but threw a pick in the end zone to Lucas Hackworth to end the game.

“The game of football counts on us messing up or us making them mess up and they got us a few more times than we did to them and that’s what it comes to,” Reser said. “The kickoff return early is what this game came down to.”

Shultz threw for 132 yards for the Senecas — 113 of those yards to Seifert on seven grabs. Rombach rushed for 102 yards on 19 carries.