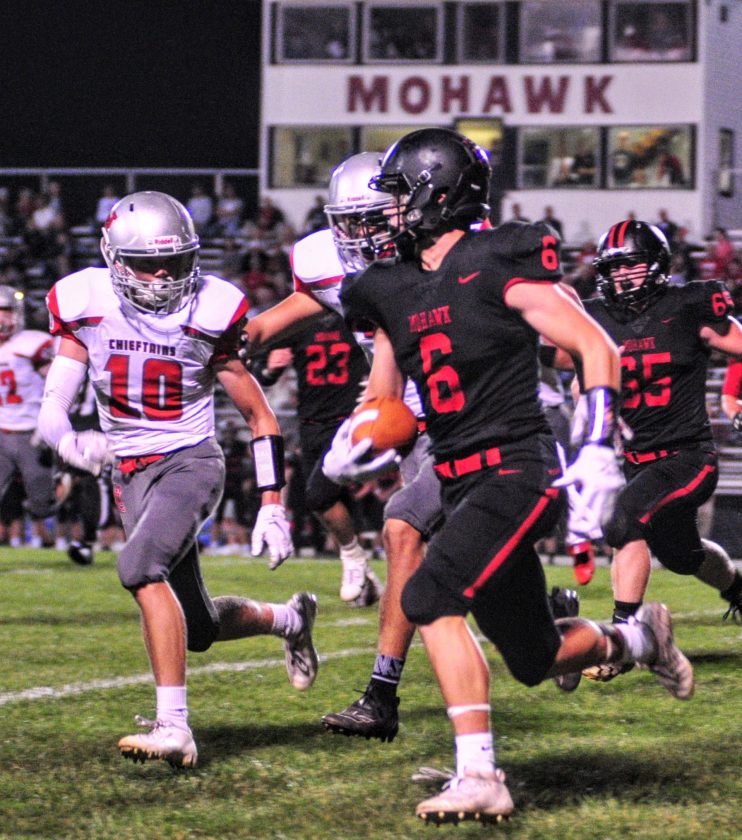 SYCAMORE — Mohawk’s football players were thrown for a loop hours before they even took the field.

The news developing from a rollover auto accident involving four sophomore Warrior players ultimately was as good as one could hope. The response on the field was also as Mohawk turned back Hopewell-Loudon 26-7 at Warrior Field Friday night.

“It was devastating news. The unknown, you hear Life Flight, you’re extremely worried,” Mohawk coach Eric Daniel said of the accident, which occurred around 3:45 p.m. as the four players were returning to school for the night’s game.

“Our guys, it’s like a family. I really mean that,” Daniel said while declining to name those involved. “Our guys take care of our other guys. When I heard four dudes in a car accident, my heart was in my stomach. You’re extremely worried.

“We’re happy to know, we think, they’re all going to be OK,” he said. “Three of them for sure (are OK). The one who was Life-Flighted, we think everything is going to be OK — we got a text from (his) mom.”

The Warriors put up nearly 350 yards in rushing offense while improving to 2-0, but it took a while to get that ground game going. Hopewell-Loudon, coming off a 56-7 loss to Van Buren, had a slight edge early in the game.

It wasn’t until Mohawk’s fourth possession that the Warriors managed their initial first down. It began with back-to-back penalties, but one from the Chieftains provided a jump start.

Six straight running plays, the last four involving Jesse Leeth, covered the final 48 yards. Leeth had a 22-yard burst in the trek and finished it with a 5-yard slam for the score and a 7-0 lead just 34 seconds into the second period.

The Warriors put together a better drive to start the second half, going 75 yards in 11 plays. Leeth, who was on his way to 200 rushing yards on 27 carries, covered the final 12 to push the margin to 13-0 with 5:41 showing in the third period.

It wasn’t long before the Chieftains were applying a little pressure, however.

Mohawk put together a couple first downs but was stopped on fourth-and-1 at the H-L 36. On the first snap, Travis Milligan streaked down the left sideline and sophomore quarterback Ashton Bour hit him in stride for a 64-yard touchdown. Bour’s kick trimmed it to 13-7.

“We were shell-shocked last week. We had a bunch of guys making their first starts and it showed,” H-L coach Brian Colatruglio said. “They’re as good of a coverage team as we’ll face this year. They’re outstanding in how they coach coverage, so when we get in long-yardage situations like we had (in the first half), it makes it really tough.

“But we like our split end matchups against anybody,” he said. “Travis and Jordyn (Jury) are really good ones and we tried to take advantage of them. We just couldn’t do it enough.”

Mohawk’s style of a quick-hitter of a response was a little different. It took four plays, highlighted by Leeth’s 40-yard burst. But the resulting score, on Mason Danner’s 2-yard shot up the middle, pushed the margin back to 19-7 with 11:24 to play.

“They flipped the possession and then they scored right now,” Daniel said. “We were always worried about (the big play). But when we went up two scores there in the fourth quarter, that really helps.”

“I felt like we were able to break them down some, especially in the second half,” Daniel said. “Our guys are not big up front but they’re extremely tough. I thought we did a heck of a job up front, our O-line, D-line and linebackers.

“And Jesse Leeth was unbelievable,” he said. “I don’t know how many broken tackles he forced, but he was a menace tonight.”

For the Chieftains, Bour was the top rusher with 56 yards and he hit 13 of 25 passes for 152 yards, but with a couple interceptions by Tyler Hayman. Defensive back Landen Snyder also came up with two big breakups of potential long completions.

“I know it sounds like a broken record, but our effort was outstanding,” Colatruglio said. “Defensively, I think we probably played well enough to win. Offensively, we just struggled — too many negative plays, penalties in big spots and missed assignments.

“We have to work on the mental aspect of things a little bit,” he said. “We start five sophomores and a freshman on offense and it showed tonight against a really good fundamental defensive team.”