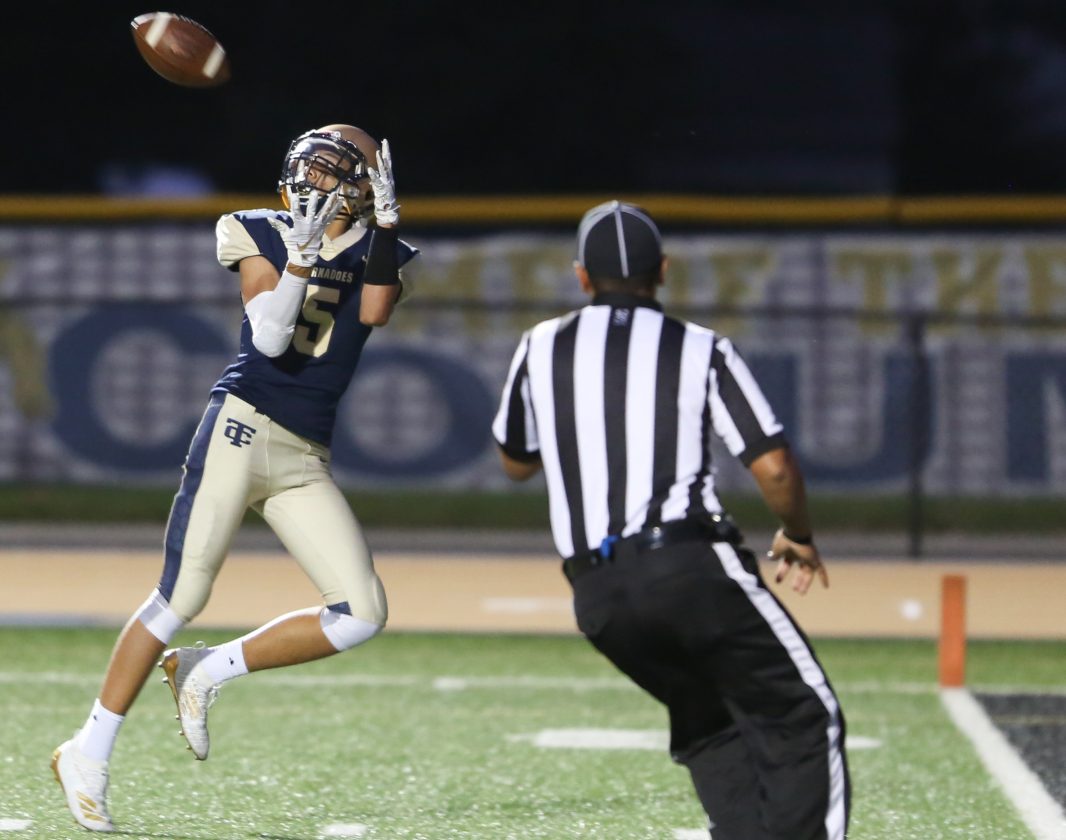 PHOTO BY STEVE WILLIAMS Columbian’s LJ Reaves hauls in a 43-yard touchdown pass at the end of the first half against Waite.

Columbian did the majority of its damage Friday night in the beginning and end of the first half.

The Tornadoes scored a touchdown on their first offensive possession, and led 14-0 over Toledo Waite after just 1:55 of play.

Then, they scored twice in the final 1:36 of the second quarter, capping that burst with a 43-yard touchdown pass from Nick Koerper to LJ Reaves.

The Tornadoes led 28-6 at the break, and added two touchdowns in the second half for good measure, polishing off the Indians 41-6 at Frost-Kalnow Stadium.

The Tornadoes improved to 2-0, and will travel to Ashland next week.

Columbian got things rolling immediately, when tailback Nick Jackson broke a 65-yard run to the end zone, and the Tornadoes went up 7-0 17 seconds into the game.

“We knew we had some schematic advantages, and some looks, possibly,” Columbian coach Judd Lutz said. “At the same point, we knew there was a good chance (Waite) was gonna try to neutralize the run game by packing the box and being really aggressive, and they were. So, starting off the game with a really good blocked up play and a great cut by (Jackson), taking it to the house, being good enough in the perimeter to not just have a 20-yard game, but six points.”

Waite managed a single play on offense before the Tornadoes had the ball again. The Indians’ Morrell Jordan was stopped in the backfield on a first-down carry and fumbled. Columbian’s Jaxon Harris recovered and returned the ball to the Waite 7.

The Indians regrouped. They were able to thwart a TC drive that had moved inside the 10, then went on a seven-play, 54-yard drive early in the second quarter that resulted in their only points.

Javon Pratt — the Indians quarterback — finished the drive with a 1-yard TD run. The point-after was missed, but Waite had crawled within 14-6.

“We kind of gave them too much defensively in my opinion,” Lutz said. “We hurt ourselves at times.”

It stayed 14-6 until the final two minutes of the half. Koerper connected with Robert Daniel on a 3-yard rollout touchdown throw with 1:46 left until the break, putting Columbian up 21-6.

The TC defense quickly forced a stop. The Tornadoes had about a minute to score.

It didn’t look like they would after Koerper was sacked for an 8-yard loss. But he ran for 9 on the next play, then — with eight seconds left in the half — eluded Waite pressure, stepped up and lofted a pass to a wide-open Reaves.

“They were blitzing off the outside edge, so I decided ‘You know, I’m gonna roll left a little bit,'” Koerper said. “LJ lost his man, and he was wide open in the end zone.”

It was a big game for Koerper, who not only threw for three touchdown passes — his only three completions of the game — and 111 yards, but also had a pair of big punt returns. He returned one 40 yards and another 30.

“Just gotta go out and make something happen, make it as easy I can when I’m at quarterback,” Koerper said.

The Tornadoes completed a few more big plays. Harris caught a screen from Koerper and went 65 yards down the sideline for a third-quarter score, and Kesean Jackson finished a fourth quarter possession with a 35-yard gallop.

“Everyone got to eat a little tonight,” Lutz said.

Waite’s second quarterback, Nicholas Heslet, finished 8 of 22 passing, though a number of the incompletions didn’t appear to be his fault. The Indians were hurt by nine penalties, one of which occurred before the game even started. Waite was called for a delay of game because the team wasn’t on the field on time.