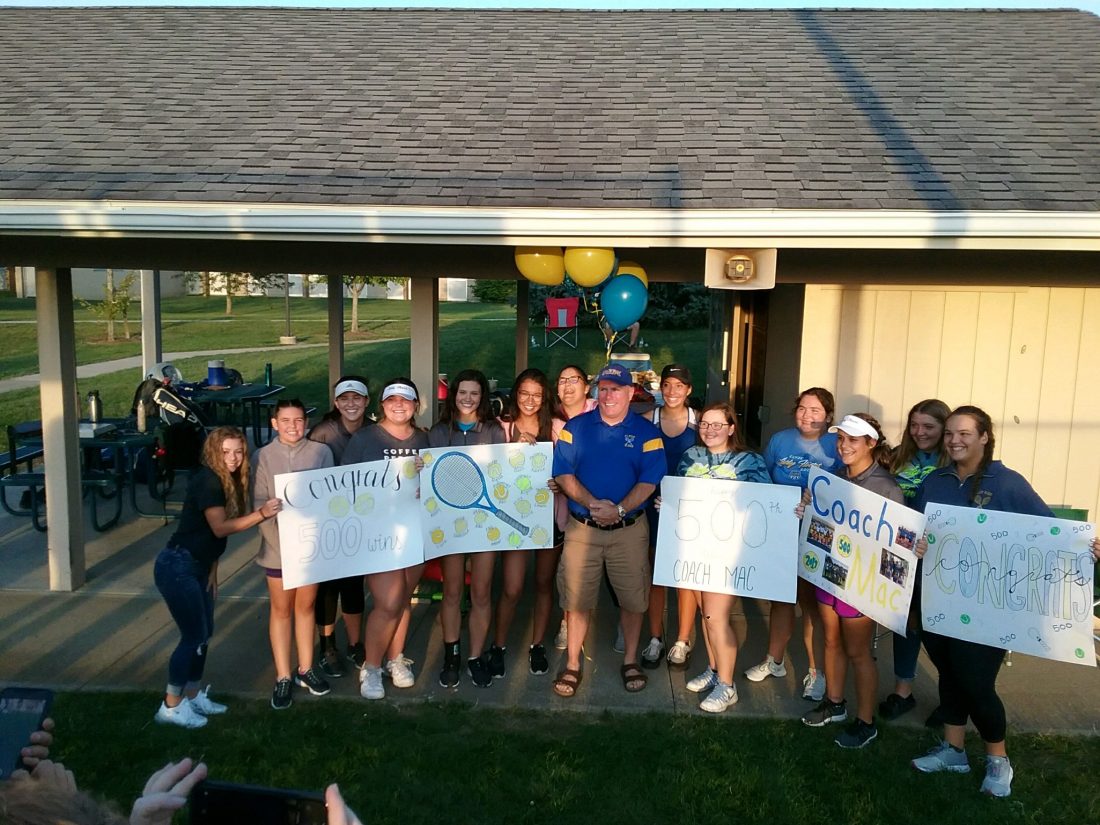 PHOTO SUBMITTED Clyde tennis coach Jeff MacFarland (middle) celebrates a 5-0 sweep of Bellevue and his 500th win with his team Monday in Clyde.

CLYDE — A little more than three decades ago, Jeff MacFarland picked up his first career win over Bellevue.

On Monday against Bellevue, MacFarland and Clyde picked up a historic win that not many coaches will ever see.

“It feels great,” MacFarland said. “I have had a lot of good athletes on my teams at Clyde. I have always appreciated the work ethic.”

MacFarland noted that this whole coaching journey started in 1988 when Clyde defeated the Lady Red, 3-2.

“It is definitely a rivalry and we are so close,” MacFarland said. “To have my 500th win against them kind of brings it full circle. To pull out a 5-0 win, I was really happy with the way the girls stepped up.”

Monday, it was a first doubles win by Megan Barrett and Alyssa Laurer that officially clinched the win for the Fliers (9-3 overall, 5-1 SBC Lake). They topped Bellevue’s duo of Leighann Motley and Saige Garcia, 6-3, 3-6, 6-3. Barrett and Laurer jumped out to a 3-0 lead in the final set.

“We had a lot of good stuff going on, but when we come to Clyde, we know it is going to be a battle,” said Bellevue coach Sue Eastman, whose team fell to 4-4, 3-2. “We knew we had to get our game face on and get ready to go to war.”

Emma Strudthoff and Rayven Whyde played a sensational match at first singles. Strudthoff came out the winner, 6-4, 3-6, 7-6 (3). Whyde broke Strudthoff at 5-5 in the third set and served for the match. Strudthoff broke back and controlled the tiebreaker from the beginning.

“Emma easily could have given up,” MacFarland said. “She fought and broke back. She got up early in the tiebreaker and she had some demons to address there late. She finally put it away.”

“The girls have always been competitive,” MacFarland said. “You could see it today. Even after the match was official, we kept fighting. The wins at first and second singles — those girls could have just said they were done. They fought and that is what I have always noticed with Clyde athletics.”

“Congratulations to Jeff on his 500th win,” Eastman said. “Good for him. Unfortunately, it was against us. When I first started coaching, Jeff was one of the first ones that came and talked to me and showed me the ropes.”

“It is something I saw with Nancy early in my career,” MacFarland said. “She had 500 wins and I thought that was a great milestone to have. I know I have been in the same season as volleyball, so I have always been aware of what they are doing. To also get to 500 wins makes the girls athletics at Clyde High School special.”