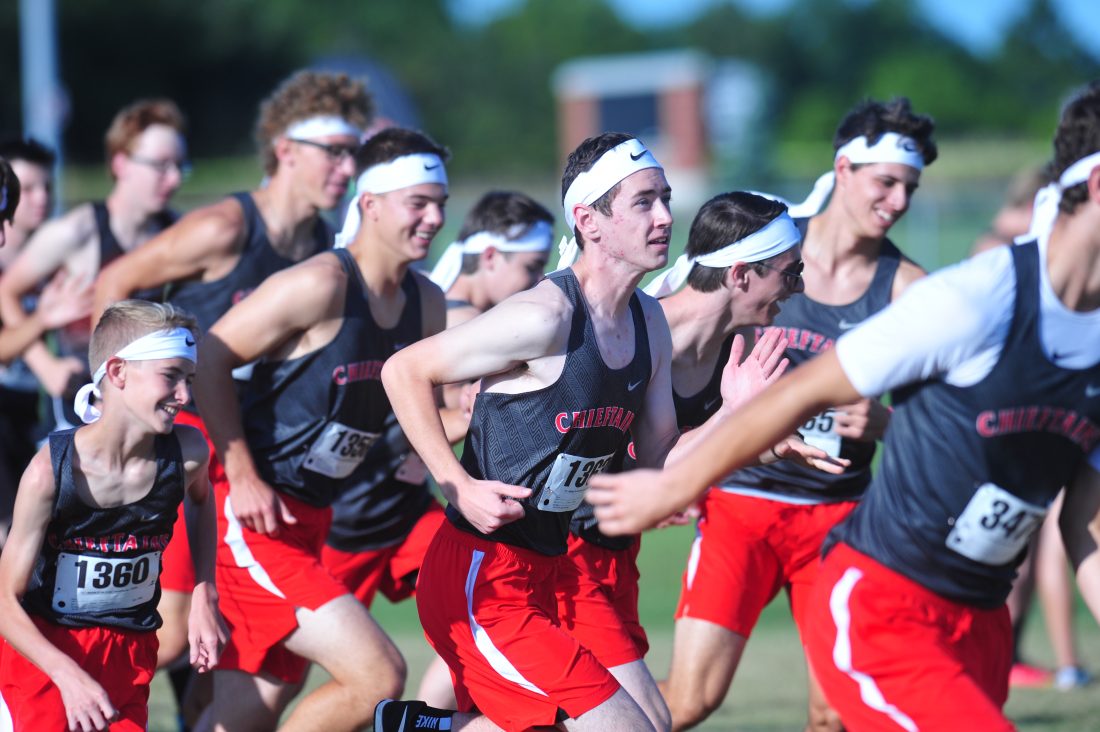 PHOTO BY REBECCA PADULA The Hopewell-Loudon boys team warms up before the race in the Tiger Classic Invitational at Seneca East Saturday.

ATTICA — Reilly Cozette has an appreciation for the Seneca East Tiger Classic, and not just because she ran so well in it.

The Lakota junior was the top area finisher in the White Division, finishing third in the girls race in 19:28.66.

But the standout also seemed to notice how much growth there has been in the event. In Cozette’s race alone, there were 221 runners and 19 full teams.

Seneca East girls coach Matt Schock said that when the meet started seven years ago, the meet had just 18 teams.

Saturday, the grounds outside Seneca East High School were packed with tents and people.

Now the meet has grown so much that it includes three divisions.

“I just want to personally thank all of the community and the volunteers who stepped up to make today happen,” Schock said. “This is the most workers I’ve ever had; I had 150 people today.”

“Amelia Boes and Kennedy Beard ran really well up front, and are both ahead of last year, and that’s what we like to see early in the season,” Schock said.

But it was Cozette who had the best day of all area girls. She led Lakota to sixth (187).

“The beginning I felt really good, but over the course of the race, you started to break down everything and you’re like questioning yourself,” she said. “But I had a really strong race; I PR’d today.”

In the boys’ White Division, Hopewell-Loudon shined. A team that qualified for state last season and didn’t lose anyone to graduation, the Chieftains took second, with 102 points. Mount Gilead won with 82.

“Very happy with how they ran today and how we ran as a team,” said H-L boys coach Helen Coleman said. “We were hoping to do a nice job at this meet, and just kind of see where we were at.”

The results were good.

“I was pretty happy with it, our team’s definitely been putting in a lot of miles, a lot of work this summer, so I’m really proud of them,” Foster said. “I’m looking for good results. We didn’t lose any varsity guys last year, so we’re working pretty much where we left off last year. I’m expecting pretty good things.”