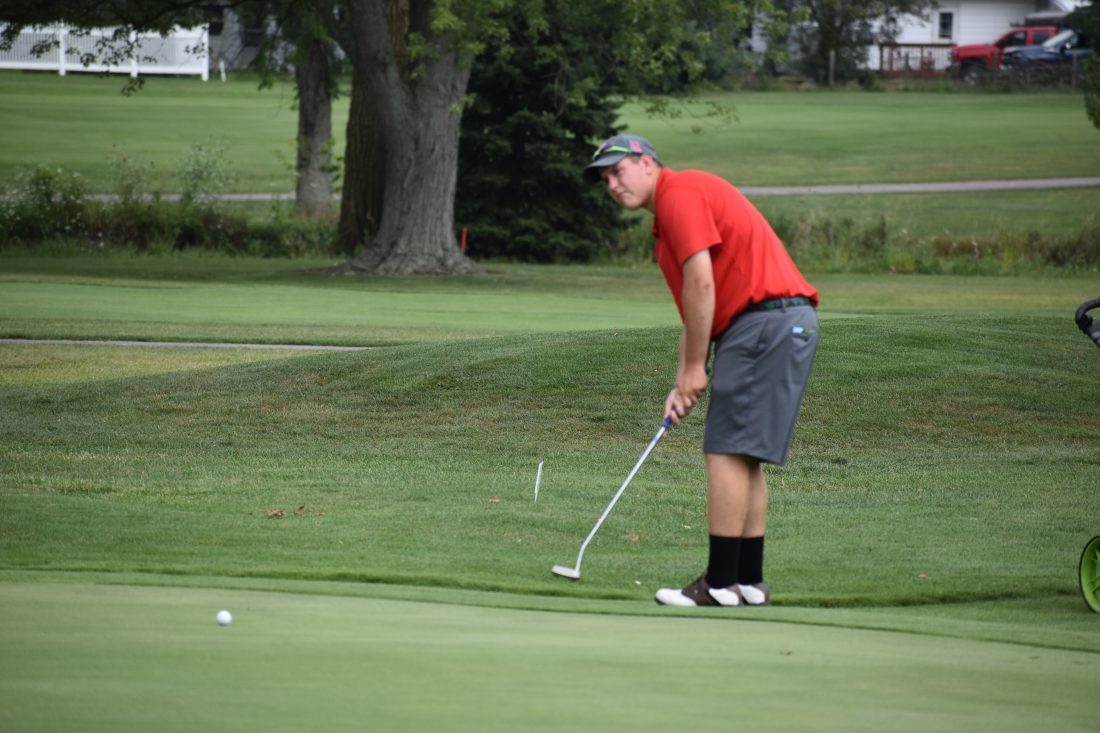 PHOTO BY ZACH BAKER Hopewell-Loudon’s Luke Graham watches his putt Thursday during a tri-match against Danbury and Sandusky St. Mary at Loudon Meadows.

Gabe Dohanyos added a 46 for the Chieftains, while Owen Schumm had a 47 and Layne Myers shot a 50. Brendon Blott (53) and Walker Suter (60) also played for H-L.

Grayson Clark shot a 38 to lead Danbury, while Casey Crooks fired a 37 to medal for the Panthers.

GALION — Despite a 39 from Brett Montgomery, Upper Sandusky dropped its first match of the season in a 164-172 loss to Galion at Sycamore Creek.

Owen Knapp shot a 41 for the Rams (3-1), while Evan Young chipped in a 44 and Benjamin Latham finished with a 48. Gavin Carey shot a 55 and Ethan Collin was one stroke behind him.

Matt McMullen and Spencer Keller shot twin 39s for the Tigers (2-0). Max Longwell added a 42 and Nate McMullen ended with a 44.

Alex Kanney, Jarod Mason and Kaiden Vaughn had the 42s for the Bucks. Logan Niese rounded out the scoring with a 45. Tyler Rose carded a 47 and Justin Dentinger finished with a 51.

Reese Hannam posted a 41 for the Warriors. They also got a 45 from Kael Margraf and 48s from Austin Tusing and Owen England. Evan Kuenzli recorded a 50 and Zach King posted a 51.

Caity Scheifer fired a 51 for the Royals. They also got 58s from Gabby Johnson and Kassidy Stanford and a 59 by Jordyn Alspach.

“I’m extremely proud of my team and how hard they are playing,” Rams coach Matt Miles said. “Several of the girls are showing up to practices and matches 30 minutes early and hitting on their own. Their efforts are really making a difference.”

VERMILION — Griffin Bunting registered a 41 for Columbian Thursday at Willow Creek, but it wasn’t enough as Vermilion slipped past the Tornadoes 183-186.

Gus Matheson led the Sailors (2-1) with a 44, while Josh DiFucci and Evan Humphrey shot twin 46s and Carter Klausing ended with a 47.

Alayna Kindle chipped in a 53 for the Warriors. They also got a 66 from Emmah Danner and a 70 from Kaiden Mathias. Kennedy Pettry shot a 71 and Kinzi Mathias added a 72.

For the Bucks, Eva Lewis led the charge with a 61, while Megan Rhodes (65), Emilee Brown (70) and Izzy Niedermier (73) contributed to the scoring. Cadence Vaughn shot a 76.

SANDUSKY — Kiley Cline continued her fantastic play early this season with a 41 Thursday at Plumbrook Country Club to boost the Chieftains past Sandusky St. Mary 223-242.

Lucy Sema’s 57 led the Panthers. They also got a 61 from Amanda Mills and 62s by Marisa Sema and Annie Sema.

FOSTORIA — McKain Miller posted a 34 to lead Carey to a 164-199 Northern 10 Athletic Conference victory over Colonel Crawford at Lakeland.

Carson Steyer and Kaleb Wilkinson each carded an 83 for OF, while Adam Magers shot an 84 and Andrew Combs ended with an 87. Jack DeRan posted a 91, while Colin Nutter finished with a 92.

Woodmore’s Danny Greenhill medaled with a 76.