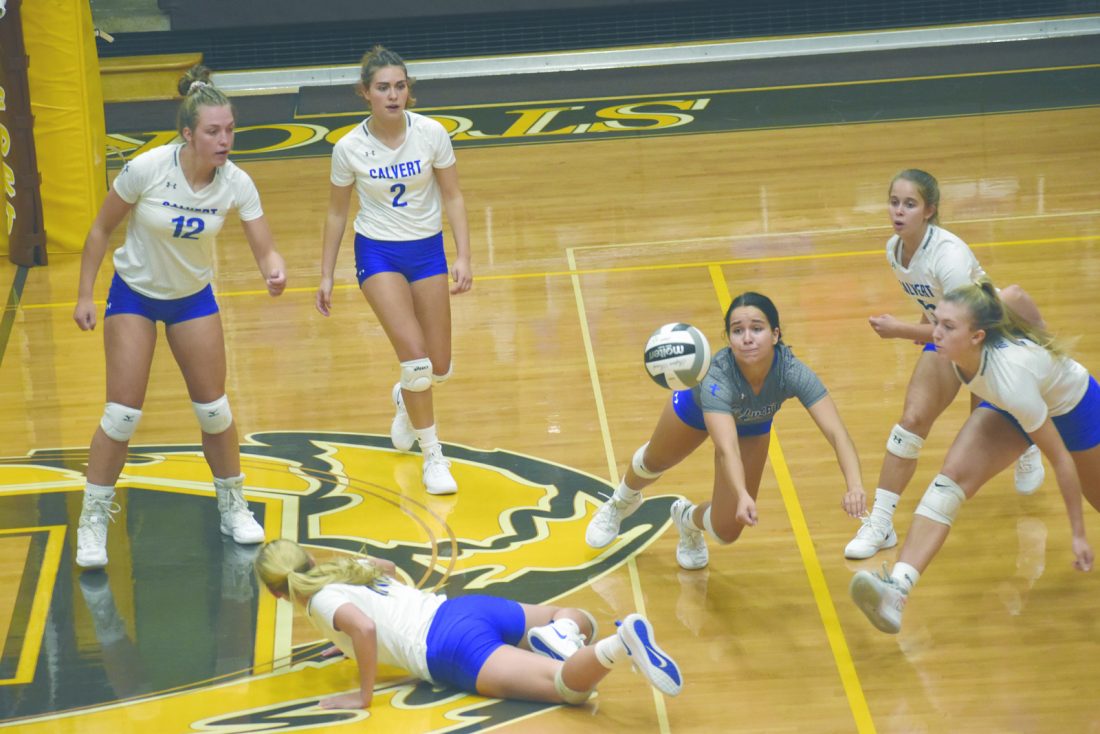 In what had the feeling of a business trip, Calvert went to rival Old Fort and dominated with a 25-9, 25-8, 25-11 sweep in Sandusky Bay Conference River Division play.

“I’m proud of the girls because they did some mental work before this game and they showed up,” Calvert coach Lori Rombach said. “It was evident from the very beginning. We have a completely different feel of a team than we had last year. We have a lot of depth and I’m trying to figure out the best girls who are working together.

“I guess when the girls are fighting for positions, you see the best come out of them and I’m proud of them for giving their best. They put on quite a show tonight.”

Calvert (3-0, 2-0 SBC River) was focused and ready to go Thursday, scoring the first nine points of the match, which included four aces from AJ Hemminger. Old Fort cut the lead to 15-7 later in the first set, but Kate Rombach took over with a pair of kills and two more aces.

In total, the Senecas served 16 aces.

“It’s good momentum and I’m trying to continue to instill in the girls it’s one play at a time. Keep our nose in it and to not take our foot off the gas,” Rombach said. “Great teams, when they are up they stay up and you don’t those lulls where you give the other team six or seven points in a row. These guys are working hard to keep the momentum on our side and it’s not always easy.

“When you have a good server delivering 10 serves, it really sets the tone.”

Part of Calvert’s success was due to Old Fort’s lack of ball-handling.

With such a young team, Old Fort (0-2, 0-2) was out-matched defensively and couldn’t get much going offensively.

“They are an outstanding team. Their serving is terrific and we are not a very good passing team, so when you get a start like that, it’s really hard to get back up after that,” Old Fort coach Nancy Hoover said. “We did pick it up a little bit in the second and third games with some blocks and some good hits, but, especially with our hitters, they had very little experience on varsity last year, so they learned some things tonight.

“We have some work to do. I told our team that (the Senecas) aren’t going to lose a game all season. They’ll probably play all season undefeated by the way it looks to me. They just have so many weapons.”

One of the weapons Thursday was freshman Hannah Miller, who led the Senecas in kills with 10.

“She’s a great player. She’s team-first and she’ll run through a brick wall for her team,” Rombach said. “I think we are trying to get her acclimated with the team and the team with her and trying to use her in the best spot.

“At the end of the day, she’s a freshman, so I don’t want to throw too much at her. I think she’ll be that girl at about midseason or at the end of the season that just takes off. The girls have so much respect for her. She’s a great player and she has a spunk about her, which her teammates feed off of.”

Ashlyn Jones tallied four of her seven kills in the second set, along with three consecutive aces. The Senecas led 19-3 at one point.

Old Fort led the third set 3-0 after a Christa Kuhn block, but the lead was short-lived. Calvert went on a 8-0 scoring run in the middle of the set to blow things open. In fitting fashion, Miller finished the contest with a resounding kill.

Rombach had five kills and eight digs for the Senecas. They also got 25 assists from Emma White, five aces and 13 digs by Hemminger and three blocks from Zoe Meyer.