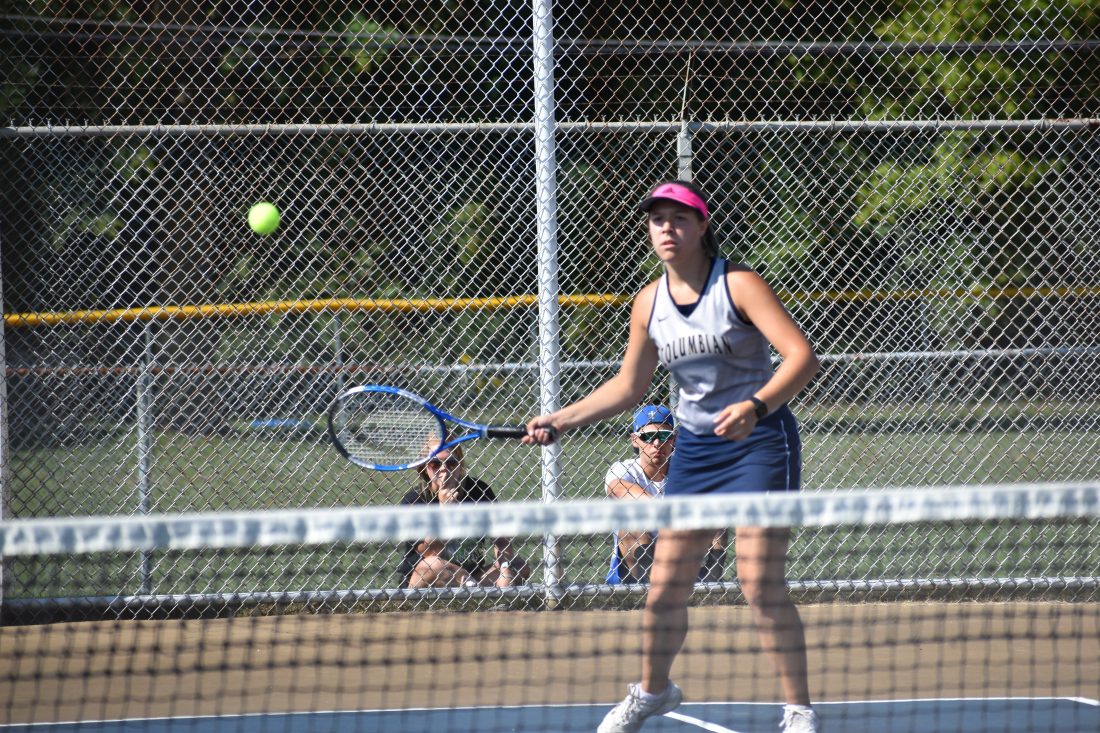 PHOTO BY MATT NYE Columbian’s Erin Musil hits the ball during a doubles match against Calvert in Tiffin Wedneday.

Columbian’s doubles teams got off to a great start, and they didn’t let up Wednesday against crosstown rival Calvert.

Calvert coach Adrian Conley was optimistic after the match, which was his team’s first of the season. But he did see a few things that can be improved.

“In doubles we need to be way more aggressive,” he said.

The highlight for the Senecas was at first singles, when Devyn Warnement blanked TC’s Morgan Amory, 6-0, 6-0.

“That is really exciting,” Conley said. “(Warnement) was solid today, a workmanlike effort. She had some good rallies and finished off points well.”

“I thought our second, third singles did an excellent job battling early in the match,” Elchert said.

Conley said it was a good day of tennis.

“We had a good time, and Columbian’s team was a pretty solid team,” he said. “A nice program there. I’d like the results to be different, but I congratulate Trey. Gotta lot of work to do.”

Rams get a new

UPPER SANDUSKY — Upper Sandusky adjusted its lineup a bit against Kenton for a new arrival.

Saki Fukuta, a exchange student from Japan, was put into the No. 2 singles spot.

“She stepped right in and played great for us,” said Rams’ coach Aaron Frazee.

“We are still tinkering with who is going to be where in the lineup, but she looks like she is going to fit in well with the team.” Frazee said.

If Wednesday was any indication, the Rams are set with their doubles teams.

“We got much-improved play from our doubles tonight,” Frazee said.

It was Kenton’s first match of the season.

BELLEVUE — Rayven Whyde got it started at first singles with a 6-3, 6-1 victory over Huron’s Katelyn Rogers. From there, the Lady Red lost just one match, and topped the Tigers, 4-1.

Willard won both doubles matches, with Kennedy Daub and Whitney Robinson upending the Clyde duo of Megan Barrett and Alyssa Laurer, 7-6, 6-3, and Willard’s team of Natalie VanZoest and Kalli Sowers holding off the Fliers’ Hali Hagemeyer and Averie Fritz, 6-2, 6-2.